How to Photograph Rainbows 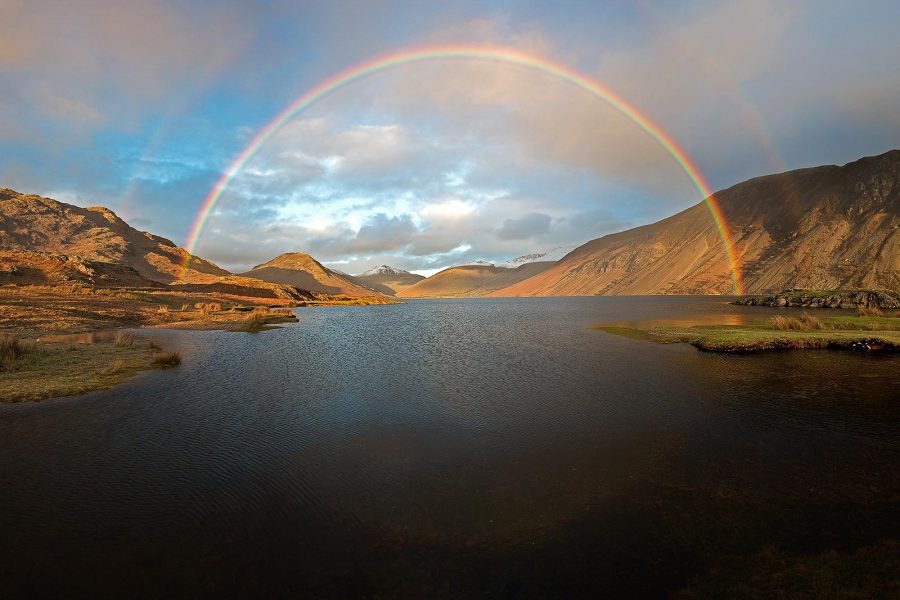 Every photographer loves to capture an image that includes a rainbow. It’s a great addition to a portfolio and, particularly if you are selling your images, always popular with customers. Because they often appear so suddenly and for such a short length of time, you will need to increase your chances of success by being able to identify where and when you are likely to see one. Knowing what gear you will need and the techniques you will need to use to capture one are vital. Let’s take a look at how to photograph rainbows.

Where is a rainbow most likely to appear?

Two elements are necessary for a rainbow to form: falling or spraying water, and bright sunlight.

The most dramatic rainbows are formed during periods of changeable weather where a sudden heavy downpour starts to move away, followed by the sun suddenly breaking through the clouds. Rainbows always occur in the opposite direction to the sun. So, for example, if the sun is in the east, you should look for a rainbow to form in the west. The images below show the sort of sky that you need to look for, and then the rainbow that formed on this occasion shortly after.

Rainbows also occur in waterfalls, geysers, and fountains in bright sunlight where there is plenty of fast flowing water that produces plenty of continuous spray. It’s perfect if you’re looking to capture rainbows a little differently.

What kit will you need?

I would always advocate using a tripod for all your landscape shots, but this is particularly important if you are shooting in the changeable light conditions that occur on the trailing edge of a rainstorm, as shutter speeds could be slower.

A polarising filter will help to make the colours of the rainbow more intense and saturated, but will result in a possible 1.5 stops of light loss. Another reason to use that tripod!

If you are fortunate enough to see a full rainbow, you can use your wide-angle lens to capture it in its entirety and also to make it appear more semi-circular. This makes for a very dramatic image.

With the sun high in the sky, you can capture a full arc with a 28mm or longer lens. If only a part of the rainbow is in sight, and you can only see one of its endpoints, you could use your zoom lens to get closer to and enhance it.

Protecting your expensive equipment during a rainstorm is essential. Protection can range from storm jackets and rain coats, to just ordinary rain sleeves.

The jackets and coats are more expensive than sleeves. Most of the sleeves and jackets protect your gear from dust and inclement weather and are suitable for handheld or tripod-mounted use. Just make sure you buy the one most suited to your type of wet weather photography.

Covers also allow you to access manual focusing rings should your preference be for manual focusing. If the above isn’t your bag, then I have seen photographers with large plastic bags with cut outs around the necessary camera parts. Whilst this doesn’t look pretty it serves the purpose, is a lot cheaper, and is easily replaceable should the bag become unusable.

What settings should you use for rainbow photography?

Exposure is critical in all forms of photography, especially when capturing rainbows. If you are using a polariser, there may be a loss of about 1.5 stops of light. Couple this with shooting towards the dark clouds and the shutter speed is likely to be slow.

I tend to underexpose the shot to give it a deeper saturation. Anything over exposed will washout the shot and make the rainbow less dramatic.

Using an appropriate Graduated Neutral Density filter will allow you to expose for the foreground without washing out those skies.

In landscape photography, narrow apertures are commonly used to get a good depth of field. This allows you to get adequate sharpness throughout the whole image.

My preferred aperture is f/11, as that gives you a good depth of field without any distortion. But always remember the rules of hyperfocal distance for correct focusing, where normally you would focus towards the bottom of the image when using a wide-angle lens.

Watch: Where to Focus in a Landscape Photo

This is the big one for me as I feel composition is 90% of creating a great image. Just taking a photo of a rainbow on its own would likely be quite a dull shot.

Make sure you’re in the correct position in plenty of time with some great foreground interest to make the image look balanced and stand out.

If possible, try using the full rainbow to frame the shot. The below image shows a shot of a full rainbow over Wastwater, in the UK, where I positioned myself so both of the endpoints of the rainbow fell on opposite shores of the lake.

The rainbow also frames the mountains in the background, with the stream in the foreground making for a nice lead-in line into the image. If the rainbow is a partial one, then try and position yourself so the visible endpoint is over some interesting subject matter.

This can be quite tricky but is always worth it. I did this with the below image over the Langdale Pikes in the background, but had to be careful not to totally block them out, as they were a major part of the composition.

It doesn’t happen very often, but occasionally you may get a rainbow reflected in water. This is not easy to capture, but when it comes off it can be very dramatic.

Reflections are a great lead-in and take the eye back to the main rainbow. A wide angle-lens is usually essentially, allowing you to get both elements of the rainbow in the frame.

Capturing a rainbow in spray

Unlike trying to predict a rainbow caused by the weather, predicting one that will appear on a sunny day as a result of continuous spray in a waterfall is much easier.

You need to identify waterfalls that normally produce lots of spray, but remember that even small waterfalls can be perfect after heavy rain.

This shot was taken at Aira Force in the Lake District, which is quite enclosed but always has a constant flow of water and, because of its considerable drop, produces vast amounts of spray.

Also, the sun for most of the day is opposite the waterfall, which produces lovely rainbows on a regular basis. Always remember not to go too close in with your composition, but perhaps capture some autumnal colour to enhance the shot.

Capturing a fogbow is very high on most rainbow photographers’ bucket lists. It’s a rare phenomenon similar to a rainbow, but appears in fog instead of rain.

It is always found, like a rainbow, opposite the sun. Because the water droplets in fog are so small, fogbows have only weak colours. They appear as white arcs with a red outer edge and bluish inner edge. This is why they are sometimes called white rainbows.

Look for fogbows in a thin fog where the sun is bright; you may also see one over the ocean. This was taken across the Pacific Ocean near Cambria, California.

I was taking an early morning walk along the cliffs and there was a heavy fog over the ocean that was gradually dissipating and drifting out to sea, allowing the sun to shine through. This was the perfect condition for a fogbow.

I positioned myself directly between the sun and the fog, underexposed the shot by 1 stop, put a 1 stop Graduated Neutral Density filter on, and waited with fingers crossed.

All the planning came together and this beautiful fogbow suddenly appeared right in front of me. It was truly magical.

The chance to photograph a rainbow can come suddenly and last only a few fleeting moments. Check the weather forecast and, on days where intermittent showers and sunshine are forecast, keep your tripod, a polarising filter, and the right lenses in your car.

Get ready to jump out when the sun shines through and a rainbow appears and hopefully you’ll get an award-winning image to be proud of. If the rainbow is faint, make sure that you shoot in raw format so that you have the opportunity to brighten it, and maybe intensify the colours during post-processing.

You can buy a rainbow filter but I wouldn’t recommend this, as the result can sometimes look false and unrealistic. You will get a far superior result and greater satisfaction by getting that magical shot yourself.