How to Photograph Dragonfly Emergence 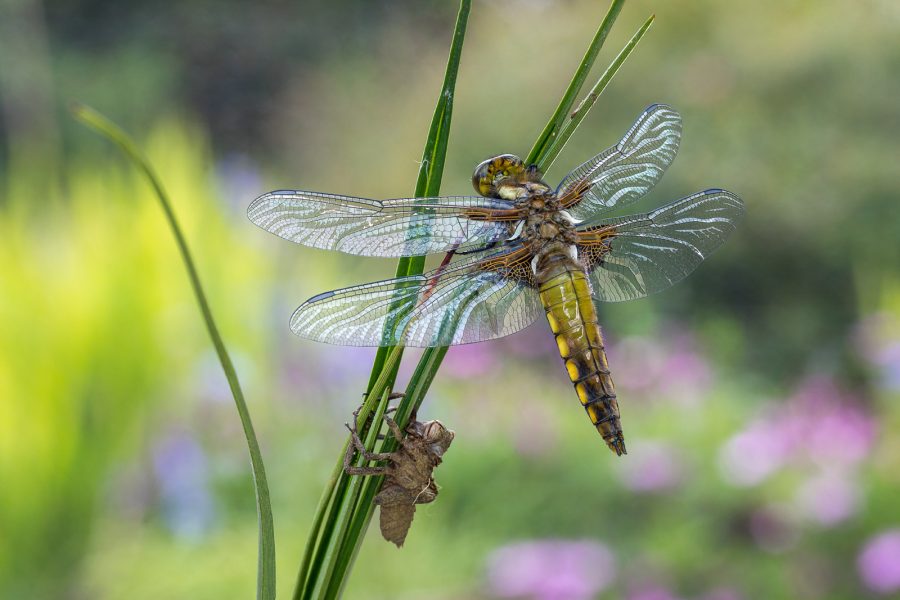 Last spring I became frustrated by an infestation of duckweed on the surface of the wildlife pond at the bottom of our garden. I tried various techniques for fishing it out, culminating in scooping it out with a large sieve attached to the end of a length of wood – but each time it spread back to cover the surface of the pond within a few days.

It soon became obvious that my attempts to clear this pernicious weed were futile, so I decided to drain the pond and in the end I replaced the liner with a new one.

As I siphoned the water out I collected any live creatures I came across and put them into a fish tank. My aim was to keep them in quarantine for a few weeks to be sure they weren’t carrying duckweed, and then put them back into the nice clean pond.

Into the fish tank I introduced some pond plants from a different pond to give them a healthy environment in which to live and gave the dragonfly larvae and sticklebacks some fish food for sustenance.

With the fish tank outside my back door, I became captivated and at times mesmerised by the activities of the various underwater creatures. In particular I was fascinated by the dragonfly larvae. I noticed that occasionally a larva would climb out of the water onto a rock, and that this was a precursor to what was presumably the same individual climbing out the next day to begin its metamorphosis into a dragonfly.

How to take photos of dragonfly emergence

These larvae like to climb up the stems of pond vegetation. They need something quite secure and to be able to get at least four or five inches above the water’s surface. Realising the potential for getting some photos, I pushed the stems of some rushes into a cube of oasis (the material that flower arrangers use for holding flowers stems in position) and sunk the oasis to the bottom of the tank using some stones to weigh it down.

With this arrangement in place, if a dragonfly larva climbed up these rushes I could take the oasis out without causing any disturbance. Then I could place the dragonfly larva somewhere suitable for taking photos. Even with the tank so close to my house, I still needed some good fortune to find a larva just climbing out of the water ready to begin its metamorphosis.

My research suggested that most of the large dragonflies emerge overnight. This is a strategy which has no doubt developed through evolution because when they are emerging they are vulnerable to predation, and it is safer to be vulnerable under cover of darkness.

From my tank, over a period of a few weeks, I had about fifteen emerging dragonfly larvae of which two were emperors and all the others were broad-bodied chasers. Both of the emperors emerged overnight so that by early morning I found the metamorphosis well underway, but the chasers emerged at a variety of different times with the largest number beginning in early to mid-morning.

By watching closely I found one larva just as it was emerging onto one of my rushes. With it being windy, I transferred the oasis on which they were positioned into our conservatory and set up my camera on a tripod with a 100mm macro lens. I positioned my camera and oasis in such a way that behind the subject there was glass and behind that was some natural vegetation outside. I needed to make sure that there weren’t any reflections in the glass, but with a 100mm lens positioned very close to the subject the background was blurred anyway. It was a bright overcast day so I didn’t have a problem with harsh shadows, though I did use a reflector to cast a little light onto the camera-side of the subject.

I had to be quick because it doesn’t take long for the dragonfly larva to begin its metamorphosis. It probably took about five minutes for the larva to settle in a position and stop fidgeting. From that point it was less than a minute until its head emerged from the back of its larval skin.

The technical aspects of the shots

I made a quick assessment about which aperture to use. My thought process is this: my camera is on a tripod, both the subject and the camera are still, so I will use a low ISO (either 100 or 200); I use live view so the mirror is up when I take the photos and so that I can focus manually using the zoom function; I use a remote release; I want an aperture to get enough of the subject sharp but I want the background to be blurred; I had set up the background to be a long way away so I could afford to use apertures between f5.6 and f11.

With these settings I will check that my shutter speed isn’t too slow and then take a test photo, check all is sharp, then continue.

Many parts of the metamorphosis were slow enough to experiment with different settings. So at various points through the process I widened my aperture and used focus-stacking. I did this either because I wanted to try blurring the background even more or because I wanted to show more of the subject sharply.

This was particularly the case when the dragonfly wasn’t in the same plane of focus as the exuvia (the name given to the empty skin of the larva once the dragonfly has emerged).

From climbing up the stem to expanding its wings took about an hour, but it was a further three hours before it had hardened its wings sufficiently to fly away. I think if conditions had been different, or if the dragonfly had felt threatened, it could have flown earlier but it was perfectly happy to bask in the warmth and calm of my conservatory with me admiring it.

Other insects and emergence

It isn’t just dragonflies that undergo this metamorphosis. Damselflies have a very similar process and, because they are more numerous, emerge at various times of day so are probably easier to find on the stems of emergent vegetation around ponds.

Another group of insects which undergo a radical metamorphosis are moths and butterflies.

Last summer I found a small group of moth larvae feeding on bogbean in a pond and some of them were swimming from one leaf to another. I photographed them and sent the photos to a moth specialist; he said this behaviour was very unusual.

Identifying the moth from its larva can be difficult, so he suggested that I took a few of the caterpillars and fed them inside a bucket with a net curtain over it. By keeping them until they emerged as moths I would be able to tell him which species it was.

After about a week the larvae had pupated, and then another two weeks later they started to emerge. This emergence was far less spectacular than the dragonfly – a rather ugly-looking insect clambers out of its pupa and up some vegetation.

From that moment it becomes much more appealing when it pumps up its wings to reveal its pristine colours and form. Typical of moths in the daytime, it then tries to hide away in the shadows until it can fly away later in the day.

My moth was a gold spot moth. It is typically found in damp places, so it was in the right habitat. Why were the caterpillars swimming? Well, I think they had ventured out onto the furthest leaves of bogbean when the water level in the pond was very low. We then had a deluge of rain which must have marooned them. Once they had finished eating the leaf they were on they had to swim to get back to other leaves. 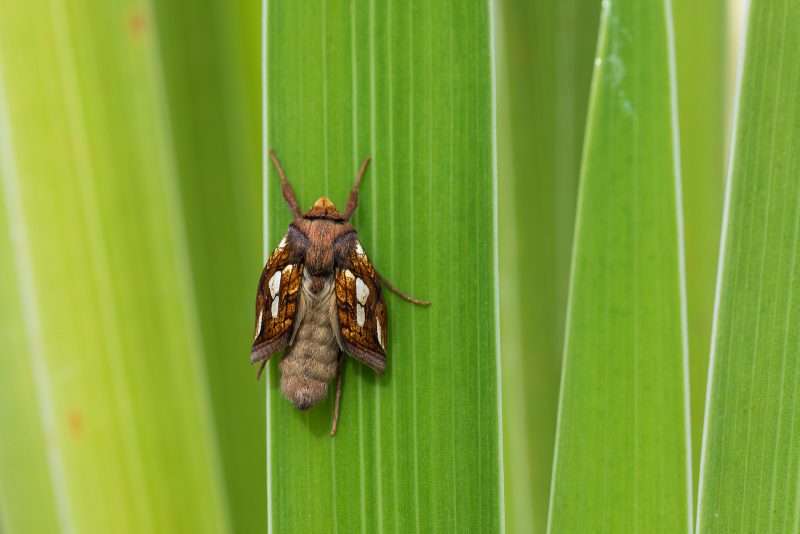 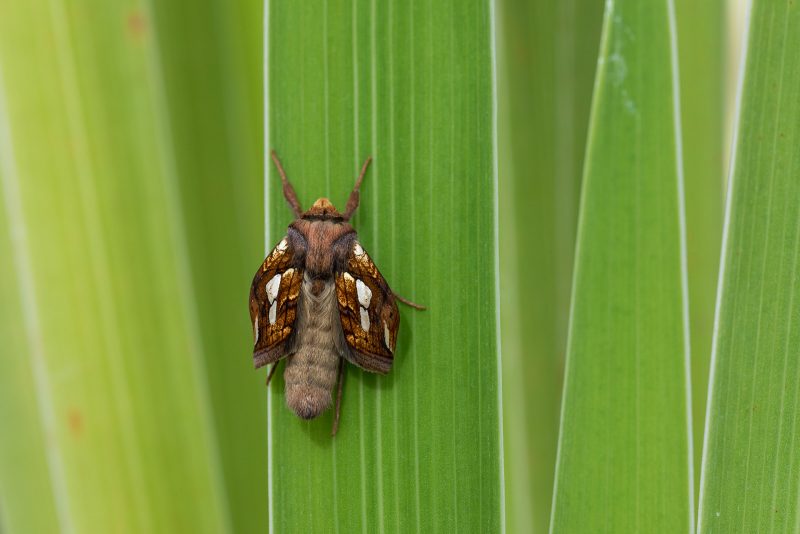 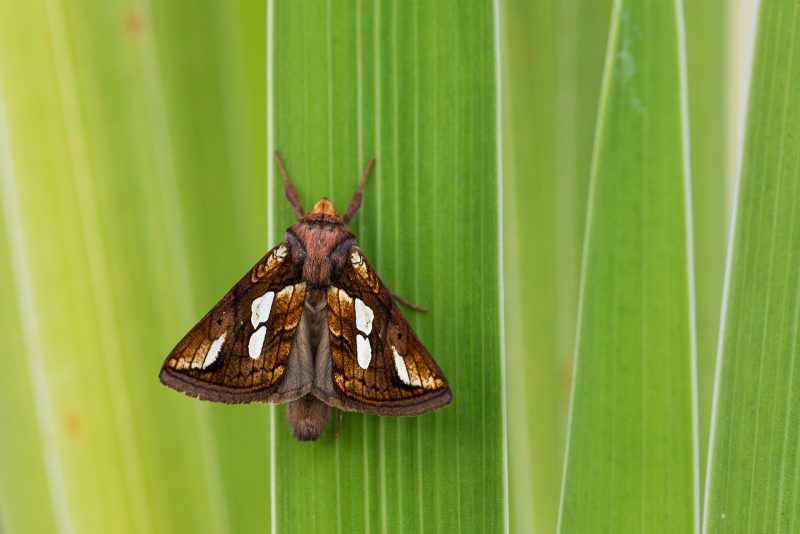 This sequence shows the development of a newly emerged gold spot moth as its wings fill out.

I had quite a year of metamorphosing insects. Being able to watch the emerging dragonfly so closely and in such detail will live with me for the rest of my life.

We learn about metamorphosis at school in a very matter-of-fact sort of way, but when it comes to seeing it happening in real time we begin to realise that the metamorphosis of a creature from one form to another is nothing short of a miracle; being able to witness it, let alone record it through photography, is a very rare privilege.