How to Photograph Bitterns 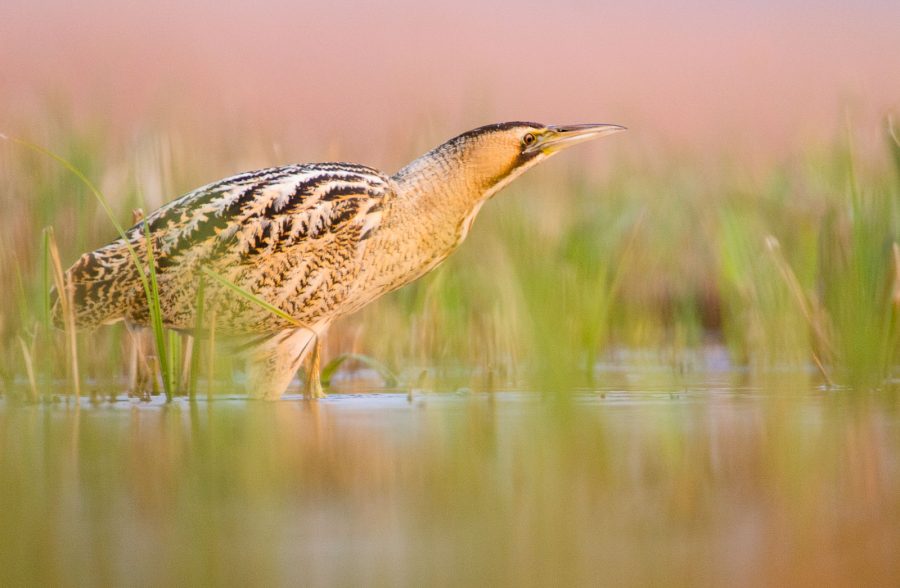 Bitterns have fascinated me ever since I first glimpsed one 14 years ago at Minsmere RSPB reserve in Suffolk, UK, as a 10-year-old. Their prehistoric look, and the fact that almost everything about them is designed so that they can stay hidden and out of sight, meant they became something of an obsession when I started photography, 3 years after that first view in Suffolk.

Although rare in summer, the population of bitterns in this country is bolstered by the arrival of winter migrants that breed in continental Europe and spend the winters in the relative warmth of the UK. Fortunately, I live near the WWT London Wetland Centre, which holds up to 5 each winter, so I would spend vast amounts of my spare time on weekends and in school holidays sat in hides waiting patiently for them. More often than not, I would go home in the evening with nothing to show for my efforts. However, on the odd occasion when I managed to get an image, all the time put in became instantly worth it. 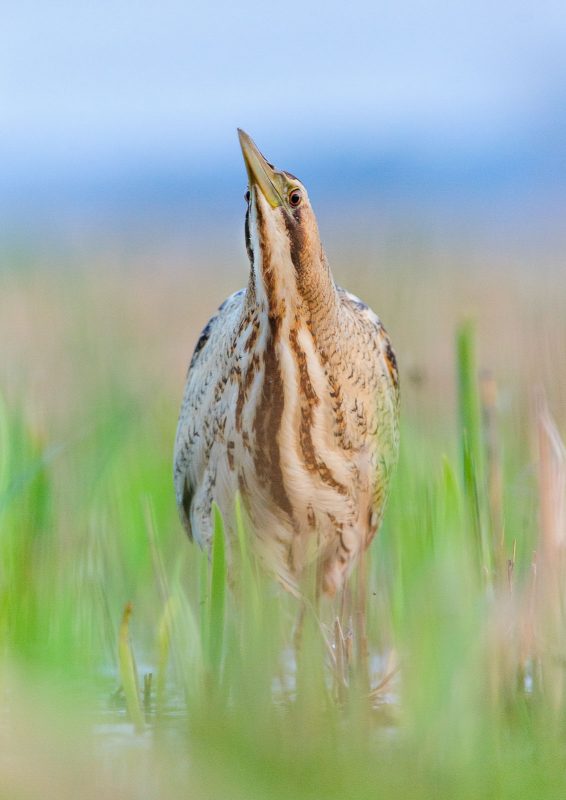 Bitterns confine themselves to reed beds, so start your search there. They are one of the UK’s rarest breeding birds; having almost gone extinct in 1997 with just 11 booming males found across the UK, the population has since seen a resurgence thanks to considerable effort by conservation organisations such as the RSPB, Natural England and others, and last summer 188 booming males were recorded. Females require large expanses of reed beds for breeding, so during the spring and summer months birds tend to be confined to areas in East Anglia, the Somerset Levels, and some parts of Yorkshire and Lancashire.

In winter, the population increases due to the arrival of birds from continental Europe, and it is estimated that there may be as many as 600 in the country. Away from the breeding season, they are much more widely distributed and can be seen across much of the country, when they can be found at smaller wetland areas with reed beds or reed fringes. Your local bird sightings page is a good place to see if there are any near you, as well as searching social media pages like Twitter and Flickr.

Read more: How to Find Urban Wildlife to Photograph

When to photograph bitterns

There are opportunities for photographing bitterns throughout the year, although between winter and early summer is best. The larger population and wider distribution in the winter means you are more likely to have them near you. As well as this, many reserves that hold bitterns will cut areas of reed bed every winter, providing areas where they can be more easily seen. This is part of reed bed management, whereby cutting and burning of reeds is carried out to reduce accumulation of material that would otherwise result in the reed bed drying out and becoming unsuitable for the birds.

Being such a desirable species, many reserves go to great efforts to provide good feeding areas for bitterns near hides that allow good views for visitors. Particularly cold weather that causes water to freeze can push bitterns out of reed beds and into more open areas in search of food, which can give fantastic views as they creep across the ice.

As spring comes around, our wintering birds return to their breeding grounds in Europe, so you will need to visit large reed beds that hold breeding birds in the UK, such as those found in East Anglia and on the Somerset Levels. At this time of year, you may hear the males’ booming calls, a deep resonant call that can be heard as far as 3 miles away. One of my favourite sounds of spring, this is a give-away to their presence and is unmistakable; the closest thing to it is someone blowing over the top of a glass bottle.

When males are trying to attract mates, you may see their display flights, where several birds can be seen in the air together as males pursue females. Whilst they largely remain hidden in the reed beds, there are some sites where birds come out into areas of cut reed to fish, seemingly unconcerned by the presence of a hide filled with excited onlookers nearby, and males have even been seen booming in these open areas. 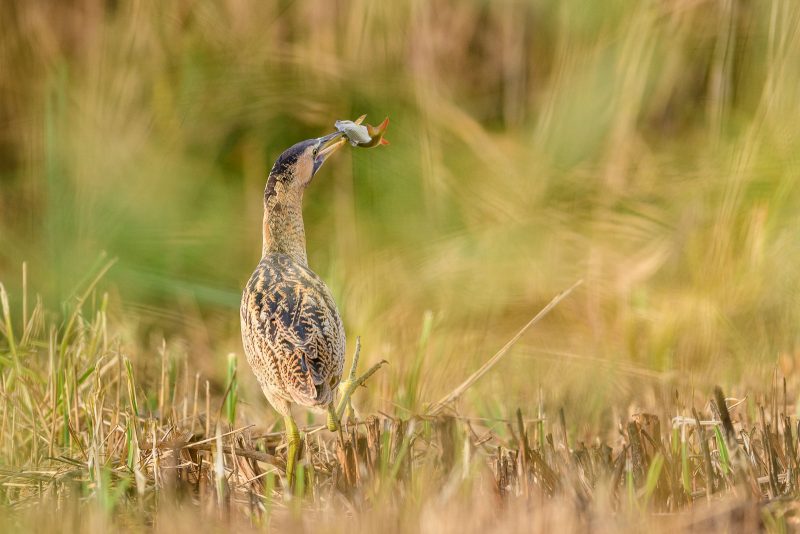 Males are polygamous, mating with several females, and play no part in rearing the chicks. When the female is on her nest, she will make regular feeding flights, before returning to regurgitate food for her growing chicks. This is a great time to get images of them in flight, as you can largely predict the area the female will appear from after spending some time watching to work out roughly where the nest is. Once the chicks have fledged, at about 8 weeks, bitterns become much harder to see as they rarely take to the air, remaining on the ground in the reeds. 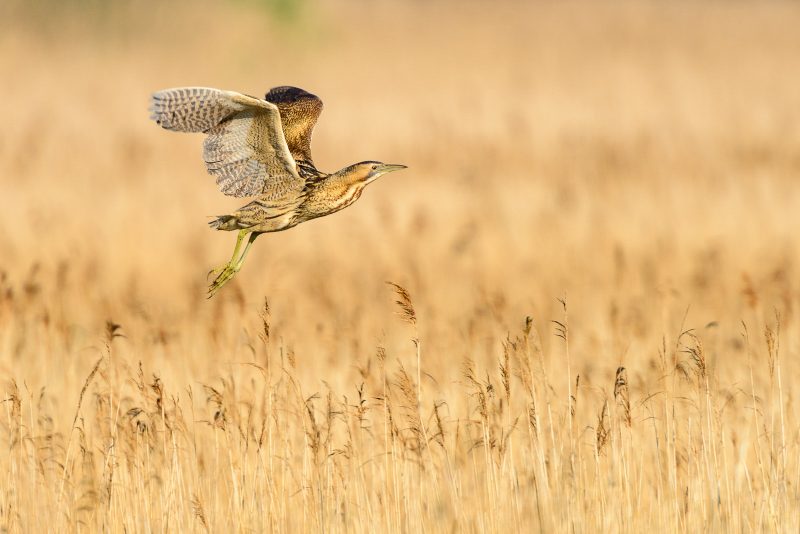 Be prepared to spend a lot of time watching and waiting, as bitterns spend the majority of their time hidden in reed beds. Many opportunities will not last long, especially with birds flying over the tops of the reeds. I would strongly recommend using a tripod if photographing bitterns, as while you are waiting you can have your kit set up and ready for when your quarry appears. Trust me, it’s pretty galling when you’ve been waiting for several hours, only to miss the shot because your camera was lying on your chest!

Using a tripod also minimises the risk of the autofocus jumping to the reeds in the background, which can happen easily as they are a similar colour to the bird. I’ve found some individuals seem to have a routine, whereby they will often appear in the same place at a similar time for a few days. It always pays to make the most of this, as it won’t last forever! 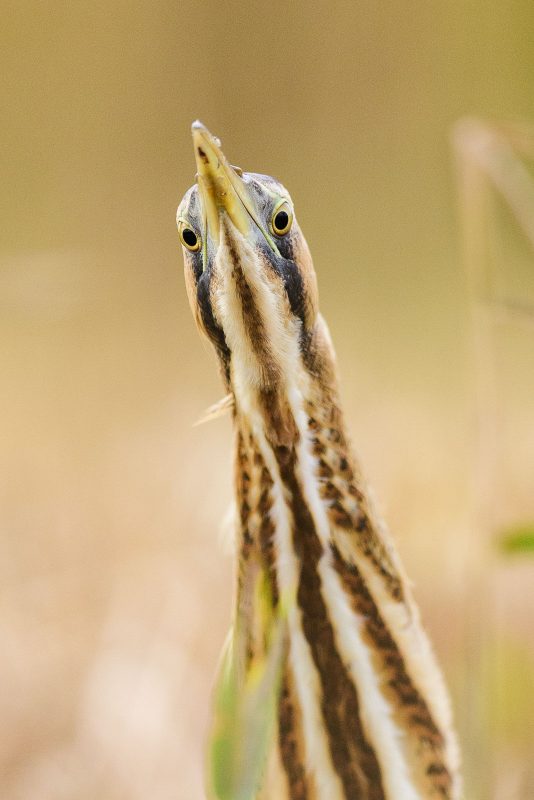 An ethical approach when photographing bitterns

Bitterns are a Schedule 1 species in the UK, and as such it is an offence to “intentionally or recklessly disturb at, on or near an ‘active’ nest”. Whilst it is extremely unlikely you will find yourself disturbing them during the breeding season, as most birds are confined to nature reserves where access is confined to footpaths, if you do happen to know of breeding bitterns on other sites, do not be tempted to go looking for the nest, as they are very prone to disturbance, and you would be breaking the law.