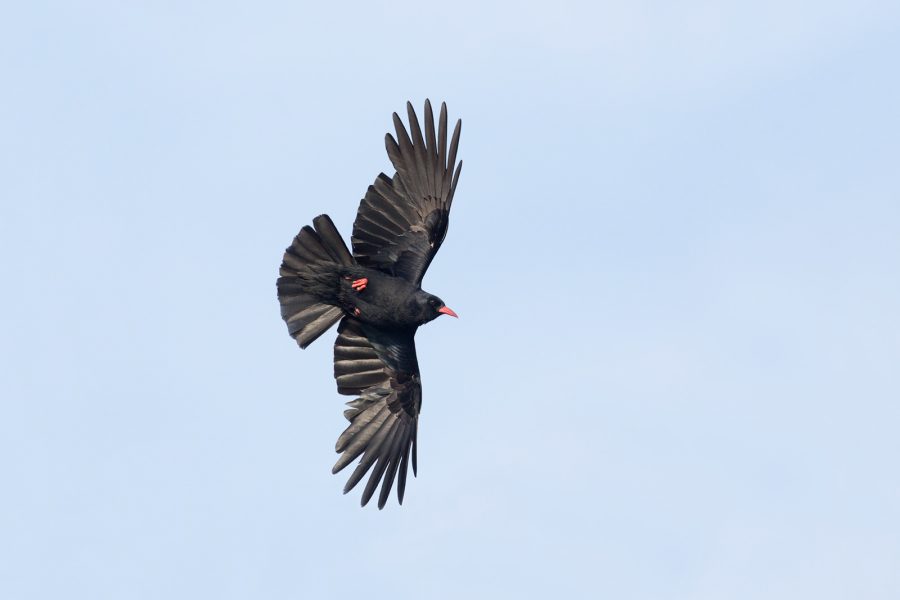 Cornwall is the most southerly county in mainland Britain – it is situated on a long peninsula jutting out into the Atlantic. These two features help to determine the climate of the county and the wildlife that live there.

Having such a strong maritime effect in a part of the world which is influenced by The Gulf Stream means that the climate of Cornwall is mild and temperate. It never gets particularly hot in summer, but more importantly there are parts of the county which hardly ever suffer a frost. The county does get more than its fair share of strong winds and some significant rainfall, and at times these combine to make ferocious storms which lash its west-facing coast.

It has a long history of tin and copper mining which hints at its rich geology, and being a narrow peninsula means it has a long, beautiful and rugged coastline. Its continuous coast path is thought to be about 300 miles long and is adorned with a wondrous selection of focal points, both natural and man-made.

Woodlands may be in short supply but there is plenty of moorland, heathland, marsh, and farmland. But it is the interface between land and sea which give the county its distinctiveness with beaches, coves, rock pools, dunes, cliffs, islands, and several good estuaries – many of which along the south coast of the county are actually flooded valleys, or rias, rather than simple estuaries.

It is also blessed with a higher than average number of gardens and estates which play host to their own unique blend of wildlife.

In this article I am going to pick out some of the natural history which is special to the county due to the geographical and climatic conditions mentioned above and I will give advice about where, when and how it can be seen and photographed.

The best places to photograph wildlife in Cornwall

In summer, the dunes around Hayle and Perranporth come alive with flowers and insects. The pyramidal orchid is probably the showiest of the flowers and can be found from early to mid-July. At around the same time (late June to mid-July) we also have a huge abundance of the nationally scarce silver-studded blue butterfly.

Read more: How to Photograph Butterflies

I think the best spot for this butterfly is at Upton Towans, near Hayle. I have never seen a greater density of these tiny blue gems than at this intriguing Cornwall Wildlife Trust Nature Reserve.

In terms of photography I advise arriving in the afternoon and being prepared to stay into the evening. On a sunny day the butterflies will be active; this will enable you to find the butterflies, but as the evening progresses they settle down to roost, often on the tall grasses.

If you have chosen a calm day then this is the time to get the photos. Be prepared to use a reflector to bounce a little golden light onto your subjects. Use a tripod which gets down to ground level, and you will also need a dedicated macro lens because these butterflies are small.

If you are on the dunes until late in the evening have a look for the glowing spots of glow-worms. In my experience these are much more common at Penhale Dunes near Perranporth, and they start to glow at about 10pm.

The beaches of Cornwall are stunningly beautiful, and if I was to pick out the one which epitomises the county it would be Porthcurno in the far west. However for a nature photographer the beaches can be made much more interesting by the scattering of unusual flotsam and jetsam found after a storm.

The strandline of any Cornish beach can hold an array of wonders, but try to choose a beach which faces the direction of the latest storm for the best results.

One of the most common, and most photogenic, creatures to be washed ashore is the goose barnacle. This often occurs in dense colonies on a wide range of floating objects such as logs, bottles, and buoys. Amongst them look for buoy barnacles and even Columbus crabs.

In autumn and winter we can have masses of by-the-wind sailors on the strandline and, over recent years, we have also had Portuguese Man o’ War which are particularly photogenic.

The beaches at Sennen Cove, Praa Sands, and Gunwalloe are among those that are very productive for strandline searches.

The wildlife of Cornwall

Top of the Cornish charts when it comes to birds are the choughs. Cornwall is the only county in England where these characterful birds are found and they only started breeding here after a long absence in 2001.

They are a schedule 1 species, in the Wildlife and Countryside Act of 1981, a level of protection which signifies their scarcity and importance as a breeding bird in the UK. They are also greatly loved by the people of the county, so woe betide any photographer who breaks the law in trying to get a photo.

Remember, being schedule 1 means we are not allowed to disturb this bird when it is at, or near to, the nest or while it has dependent young. So it is best to photograph this species outside of the breeding season which runs from March to July.

The largest concentrations of choughs occurs in the far west of the county between Land’s End and Pendeen. Botallack, Cape Cornwall, and Kenidjack, near St Just, are all good places to look for them.

You will need a long lens, but it’s easiest to use a portable lens combination such as a 300mm f2.8 with a teleconverter than it is to carry a massive 600mm f4 with a tripod. With good field craft it is possible to stalk choughs without causing disturbance.

Cornwall has more than its fair share of fulmars, ravens, and peregrine falcons – all of which can be seen and photographed around the coast, but I would also pick out this county for being one of the best places in the world for rare migrant birds.

The west of Cornwall and the Isles of Scilly can be a magnet for rarities from east and west, particularly in autumn, but also spring and winter. To help, there is a good level of up to the minute information available through the websites CBWPS and Cornwall Birding.

Rare birds arriving from America or the far east can be quite obliging. Sometimes, I suppose, they are tired and want to concentrate on feeding, and at other times they are species which naturally has less fear of people. Either way, I have photographed a wide range of unusual species of birds from around the world without needing to leave the county in which I live!

The mild climate has enabled an unusual blend of insects to thrive in Cornwall. One of the most unusual are the stick insects, which were first brought to the county in the tree ferns imported from New Zealand over a century ago. We now have unarmed stick insects across most of the county, as well as prickly stick insects in some areas. On The Isles of Scilly the four species present also include Mediterranean and smooth stick insects.

The best places to look are in the public gardens and open spaces of Truro, St Mawes, and Falmouth, as well as Tresco Abbey Garden on the Scillies. The best time to look is in late summer when the insects are at their largest, they can often be found in bramble patches because they like eating the leaves of brambles.

Another special insect to look for in late summer is the hummingbird hawkmoth – a migrant species visiting us from the continent. This wondrous moth flies like a tiny hummingbird, flapping its wings at a rate of 80 beats per second as it hovers beside a flower to drink the nectar. The best places to look for these moths is on the south coast. Look for them wherever there are thin tubular flowers such as buddleia and red valerian.

Photographing a hummingbird hawkmoth can be a challenge. I wouldn’t even attempt to photograph one unless it proved to be coming back to the same flowers repeatedly.

Try to find a spot which is brightly lit by the sun and position yourself so the sun is roughly behind you. Use an ISO which allows for a shutter speed of 1/4000th of a second or faster. Use a macro lens of 100mm or longer and compose a photo which uses the colourful flowers as well as the insect so you don’t have to get too close.

If your autofocus struggles to stay on the moth, try pre-focusing in manual focus and rock back and forth when the subject comes into frame. If you are lucky, the moth will remain hovering in one position long enough to get some shots. Don’t be afraid to take lots of photos.

Having picked out just a small number of the subjects which are special to Cornwall, I realise that I haven’t mentioned a huge number of places and species that can be easily photographed in the county.

But you’ll be pleased to learn that more advice is available through my latest book entitled Where to Watch Wildlife in Cornwall and the Isles of Scilly. I have been working on the content of this book in one form or another for the last twenty years and it is bang up to date with all the latest information including recent reintroductions, introductions and spreading species. 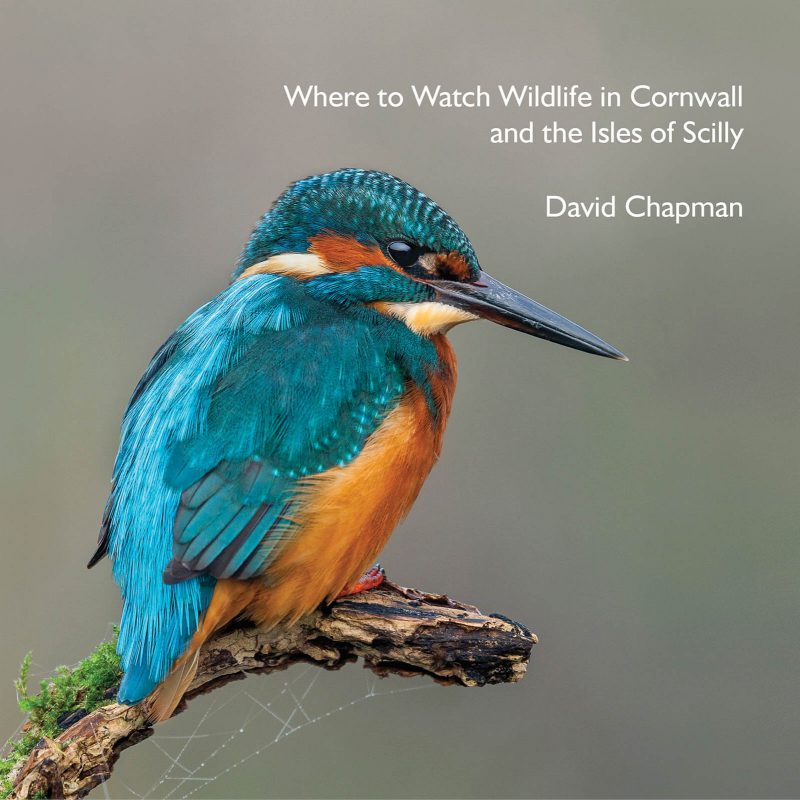 Have you got any top tips for where to photograph wildlife in Cornwall? Let us know in the comments.