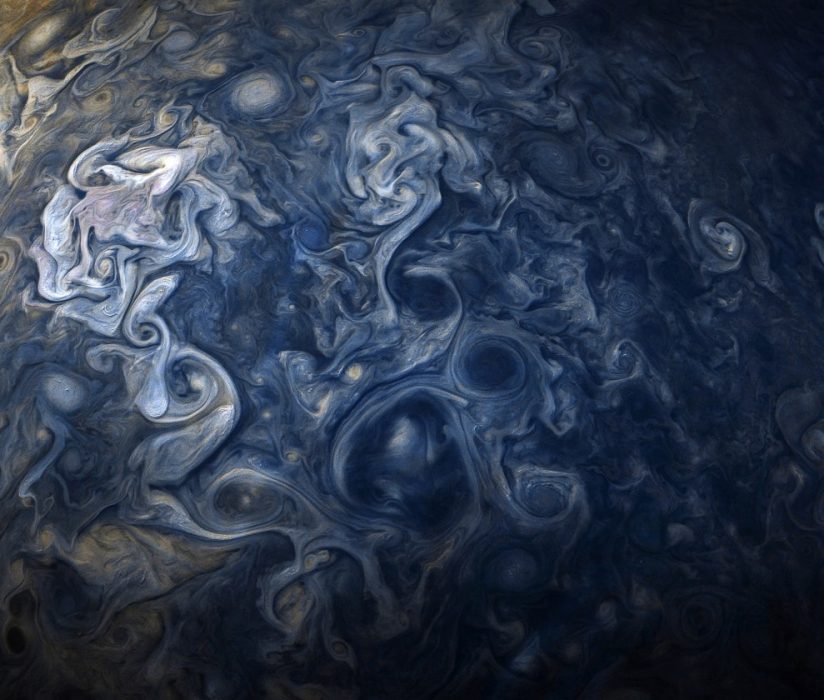 NASA are known for occasionally releasing stunning interstellar imagery, not only in the pursuit of science but to show that nature’s captivating wonder goes far beyond our own stratosphere. Their latest series depicting the swirling, marbled surface of Jupiter, confirms that the solar system is brimming with beauty.

Founded in 2011, NASA’s Juno project has been tasked with deciphering the origins and evolution of the mysterious gas giant, Jupiter. Named after the ancient Roman goddess, the spacecraft Juno project hopes to understand how much water is in the planet’s atmosphere, to map its magnetic and gravity fields, and more.

Captured over the previous year, this series of wonderfully abstract images exhibit the amalgam of colours whirling together on the planet’s gaseous surface. From gunmetal greys, to moody blues, Jupiter’s twisting clouds of its surface are easily mistaken for a marbled painting.

The below image, appropriately titled ‘Jupiter Blues’ by NASA, depicts Jovian clouds in a striking array of blues. The spacecraft Juno capture the image only 11,747 miles from the heights of Jupiter’s clouds, which NASA state is “roughly as far as the distance between New York City and Perth, Australia”. Higher-altitude clouds are casting shadows on their surroundings, with this most obvious in the white regions of the image, alongside some spots in the bottom and right sections.

‘Jupiter: A New Point of View’ beneath was created by scientists Gerald Eichstädt and Séan Doran, using data collected from the JunoCam imager on the spacecraft. Taken from 10,274 miles from the cloud surface, this planet-wide panorama shows the “tumultuous Great Red Spot” at Jupiter’s North, with the “dynamic bands” of the southern region coming into view on the right.

NASA have also provided an animated video that takes the viewer on a simulated tour of Jupiter’s upper atmosphere, centred on the location of its Great Red Spot. Created from combined imagery from the JunoCam, this computer-generated short video is a rollercoaster ride across a planet so unfamiliar to our own.