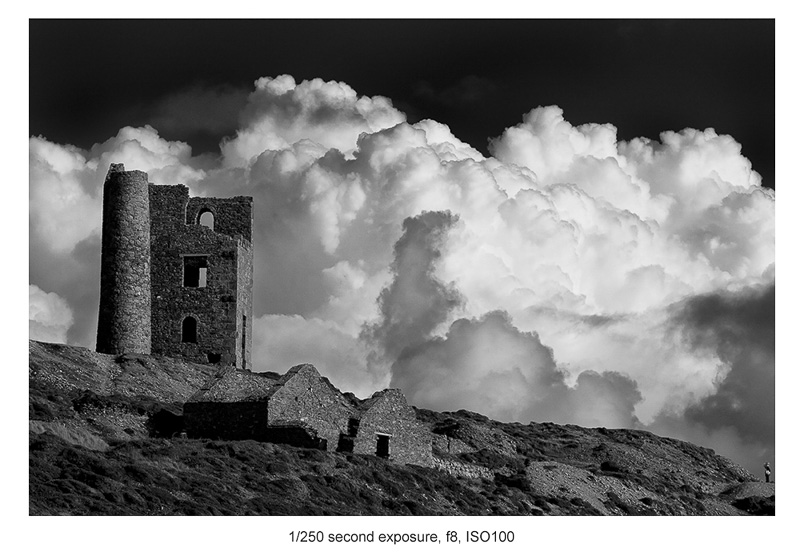 Black and white photography is about experimentation, both with the camera and the digital darkroom. When I take a photograph I decide how I want the image to look, and I do this using the camera’s spot meter to work out where I want to place the tones. I always work from the brightest area first, in this case it is the cloud that has the brightest tones.

Step 1: Set the ISO. The smaller the number, the better the quality the image is. I always aim to get the best quality I can, and on my camera it is ISO100. There is an ISO expansion where you can lower it to ISO50, but you then loose about a stop of dynamic range – so I stick to ISO100.

Step 2: Decide on an aperture value. The bigger the f-stop number, the greater the depth of field. In the above image there was nothing in my immediate foreground, and everything was quite a long way away, so depth of field was not an issue. I chose f8 because it’s my lenses midpoint aperture, and this is where it will optically perform at its best.

Step 3: Select the shutter speed. Point your camera’s spot meter at the brightest part of the scene (never the sun), and adjust the shutter speed until the light meter gives a reading of +2EV. A reading of 0EV is a mid-tone; +2EV is the brightest tone that your camera can record where detail is still present. A meter reading greater than +2EV is basically overexposed, although it is possible to recover some detail in the highlights of an overexposed RAW file.

Step 4: Having based my exposure off of the brightest area of the sky, I then checked what exposure reading my spot meter gave when it was pointed at a mid-tone on the land. In this case it registered just under 0EV which was fine. A mid tone on the land looks roughly how a mid tone should.

If the land was -2EV it would then be recorded two stops darker than it should be, and it would be underexposed. If you were to then adjust the shutter speed to make the land correctly exposed (-2EV goes to 0EV) the sky becomes two stops overexposed (+2EV to +4EV). Time then for a two stop graduated ND filter to darken the sky to within the range of the camera’s sensor (+4EV to +2EV). 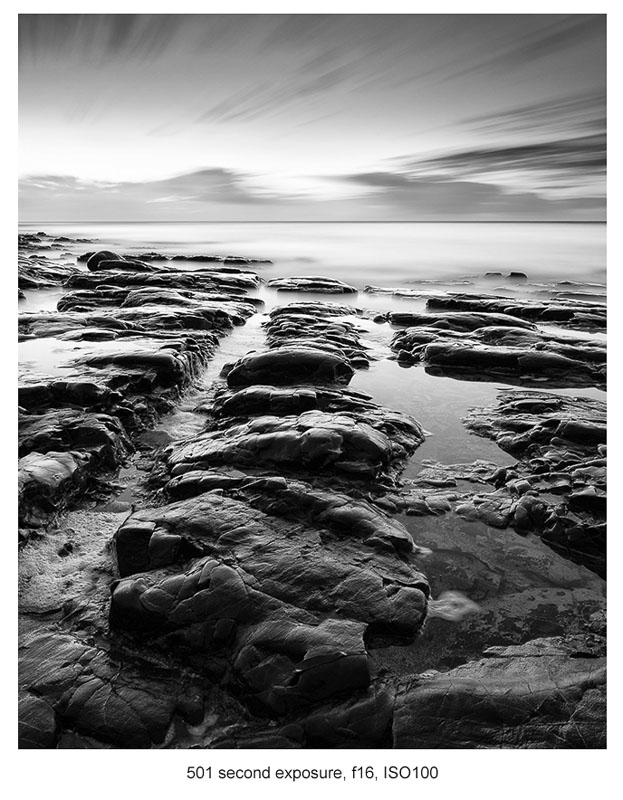 A long exposure works best when you can show movement in the frame. You are capturing the passing of time; clouds are recorded as streaks and water looks like mercury. Although you can shoot in the middle of the day using a ten stop filter to lengthen your exposure, I prefer the results you get at the end of the day when the light has almost gone. The receding light draws the eye into the frame and the shadows are recorded as deep dark blacks. I chose this location because I knew the falling tide would expose the reef and, being wet, it would reflect the light. My composition was based around two channels in the rock that led the eye off into the distance. Shapes in the landscape also work as excellent compositional aids, and in this case the two channels form a triangle which points into the distance. 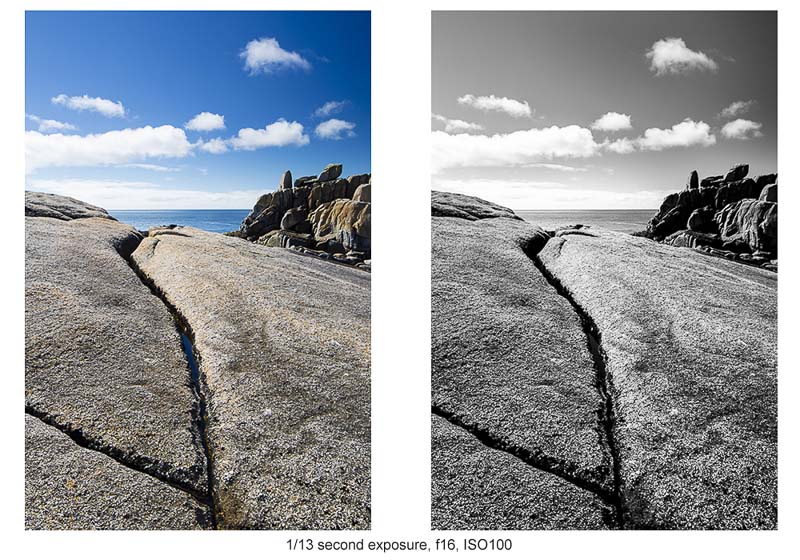 Contrast is the black and white photographer’s friend, and extremes of contrast that are normally avoided in colour landscapes should always be considered for black and whites. The example above was taken in the harsh midday sun, and the tonal range exceeds the dynamic range of the camera, but the deep black shadows add to the image. I chose to edit this image in such a way as to remove some of the shadow detail, as I felt the dark tones added to the image. How you choose to interpret the RAW file is a major part of black and white photography. There are no rights and no wrongs: it is simply down to what makes you happy. 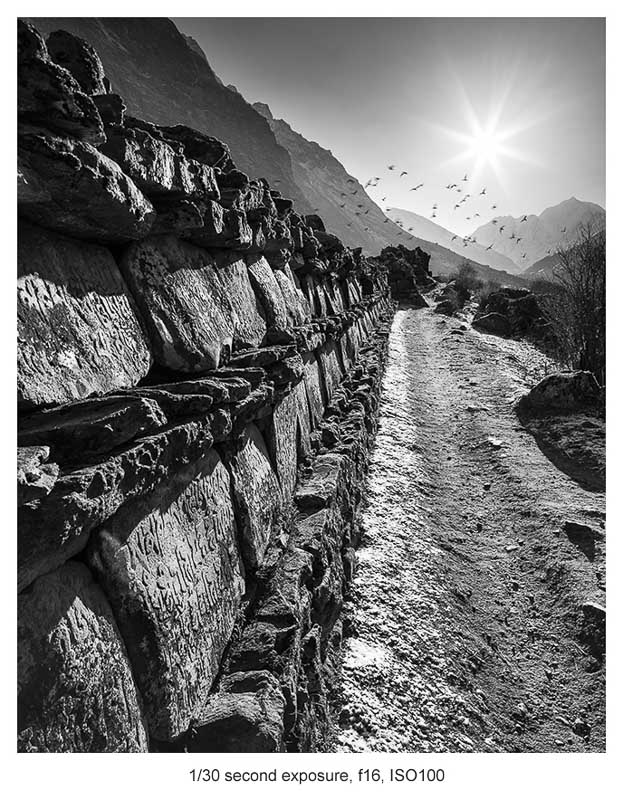 I knew as soon as I walked around the corner and saw this view that it was going to be a black and white photograph. It works as a black and white image because of the strong contrast between the highlights and the shadows, the bold shapes and the movement in the birds. Compositionally, the wall and path lead the eye through the frame towards the mountains in the distance giving depth to the image. The sun is ideally placed both in terms of the composition and also with regards to lens flare. Had it been any higher in the sky controlling lens flare would have been impossible. As it was, I took the photograph you can see here and another one with my filter holder blocking the sun to stop the lens flare. I then merged them together in Photoshop and was able to remove the lens flare. 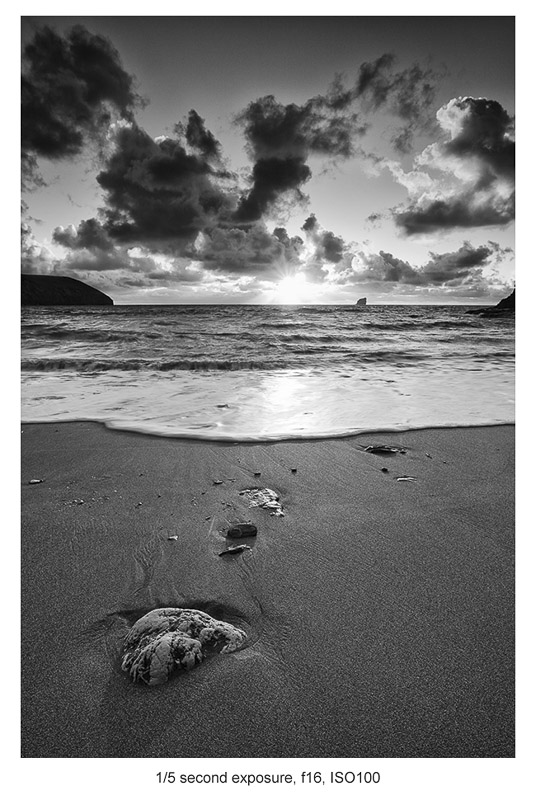 All the usual compositional guidelines apply to black and white photographs as much as they do to colour. However, one of the main things to look out for, that is arguably more important in black and white photography than in colour, is tonal separation. You might have found what you consider to be amazing foreground interest, but if the tones are the same as those around it, it won’t stand out. A mono-tonal landscape with great lighting might look good as a colour photograph, but as a black and white image it will just be flat and boring.