How to Photograph Starling Murmurations 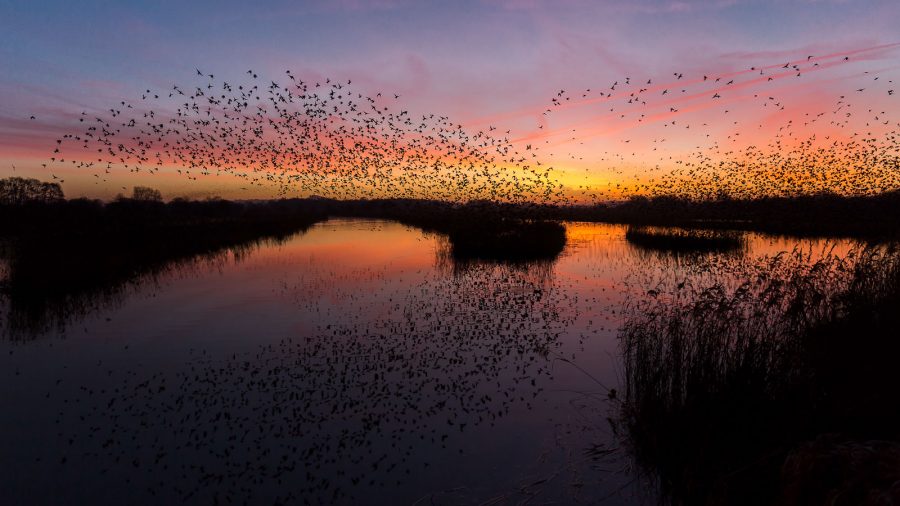 Throughout the world there are some pretty incredible natural spectacles. In this guide, I’ll talk through how to photograph one of my favourites: the starling murmuration.

Each winter, European Starlings migrate from Eastern Europe to Western Europe in search of a warmer climate and more abundant food sources. The first birds tend to arrive in October and leave in January, but numbers and time of year can change as this is dependant on the climate. The warmer it is, the fewer birds will feel the need to move from the east. 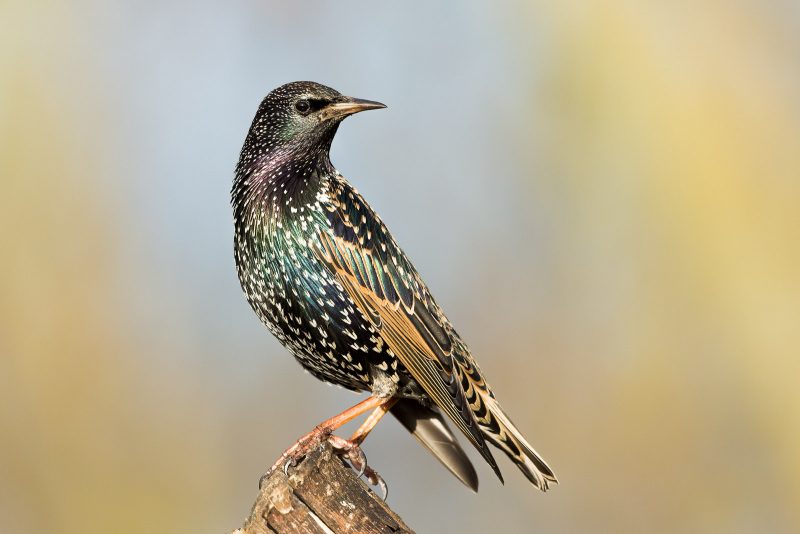 Starlings can often be found in towns and farmland where they spend their days feeding in small groups of usually less than 50 individuals. During the evening, these groups head off to roost sites and join up with other groups to form larger flocks numbering into the many thousands. One of the most common sites for birds to roost in is large reed beds, but they have been known to roost in urban locations and in trees when in smaller groups. 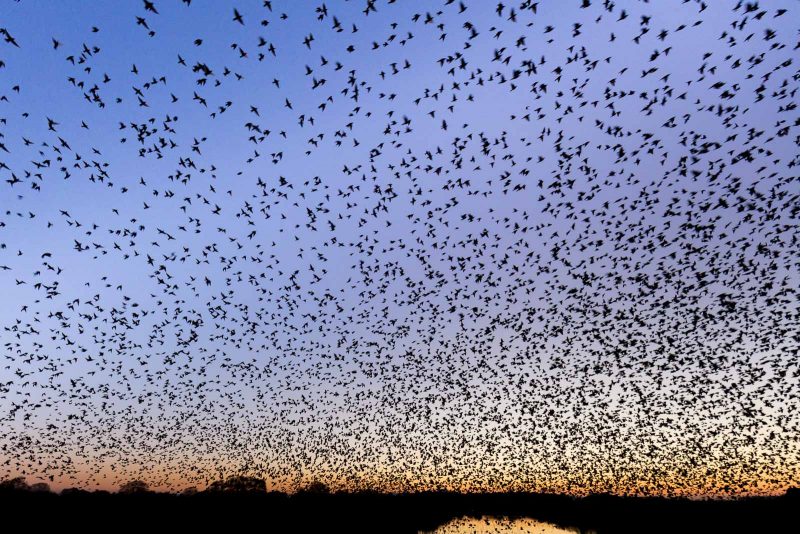 This behaviour is mirrored across the UK and Western Europe with some sites like that in Rome, Italy, getting over 5 million birds congregating together for the evening roost. Here in the UK, our largest site is the Avalon Marshes in Somerset with up to 2 million birds counted in recent years.

When these birds reach the roost sites, they often (but not always) engage in a mesmerising spectacle known as a murmuration. This is where the birds perform incredible manoeuvres in large groups above their chosen roost sites. It isn’t known why they engage in this behaviour, but experts think it could be anything from socialising to avoiding predators. 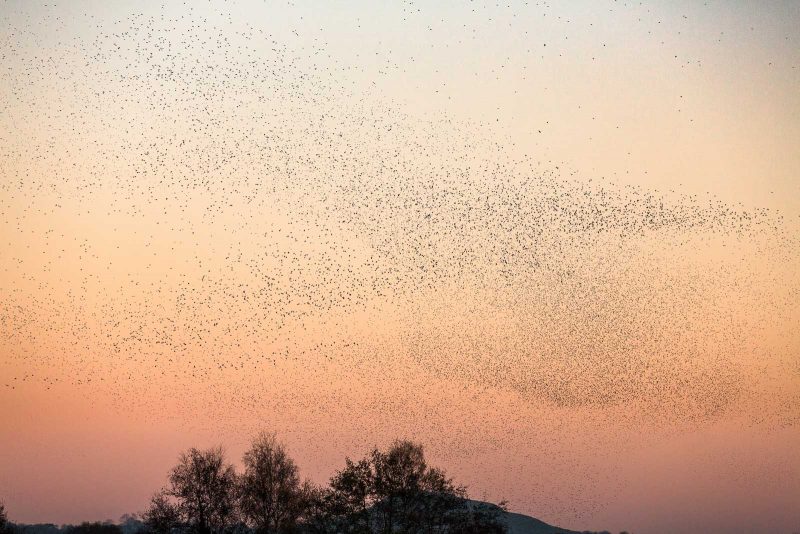 How to find starling roost sites

In recent years there has been a surge of people wanting to witness this spectacle; as a result, there are a few online resources to help locate these sites. My favourite is the Starlings in the UK website, which includes a detailed map of roost locations across the UK. All the site locations are updated by members of the public and they tend to be really current and up to date.

When you arrive at a suspected roost site, it is almost impossible to predict where the birds will land. A site like RSPB Marazion Marsh is great because you can view the whole reedbed from a single viewpoint, so have no chance of missing them. Sites like the Avalon marshes are huge and the birds can go down anywhere over miles of reedbed, so your best chance is finding a spot that offers a great vantage point and be prepared to move if needed.

Starlings usually return to roost sites around sunset, and as the days grow shorter they come in earlier with the sunset. In order to find a good spot and to make sure you don’t miss them, it is recommended that you arrive at your chosen site at least an hour before sunset and expect to be there for up to an hour after. Murmurations occur as the birds come in to roost, however they can go straight down into the reed beds without dancing for you. The weather has its part to play too, so aim for still evenings to be in for the best chances. 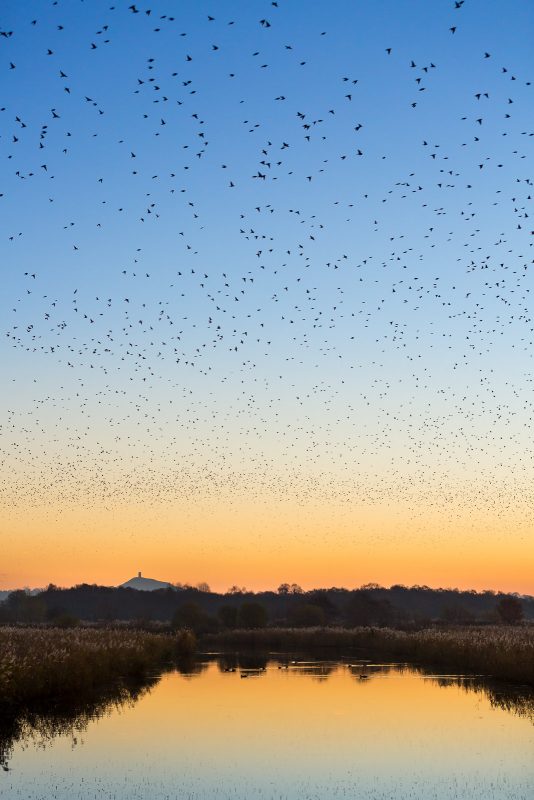 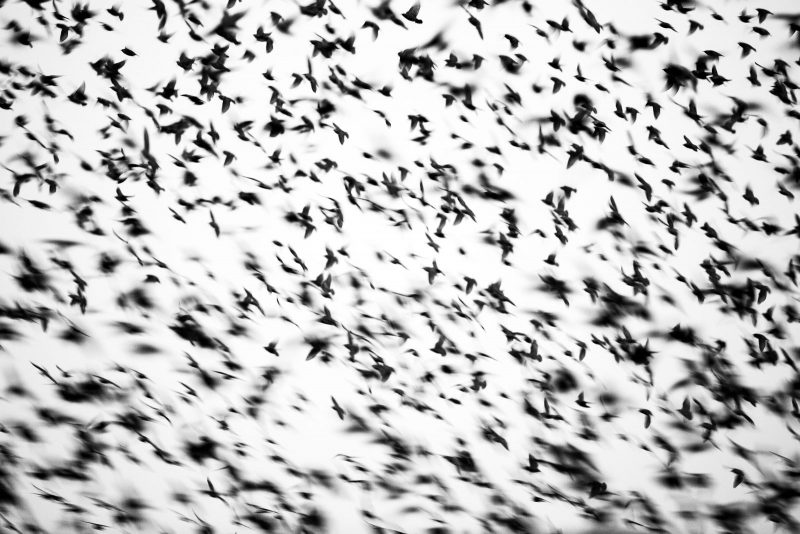 At really popular sites you can get almost as many people as birds (well at least it might feel like it), such as Ham Wall in the Avalon Marshes with some evenings having over a thousand visitors. To avoid such crowds, I prefer to go in the mornings. When birds leave the roosts in the morning they don’t murmurate but they all leave in one mass emergence which can be just as impressive. They tend to depart just before sunrise so aim to get onto site an hour before, but for this effort you will have the site almost to yourself. In order to find them in the mornings just use your ears: the birds can make a huge racket as they wake up, so listen and head in their direction. Even a roost of just a thousand birds can be heard from hundreds of metres away. 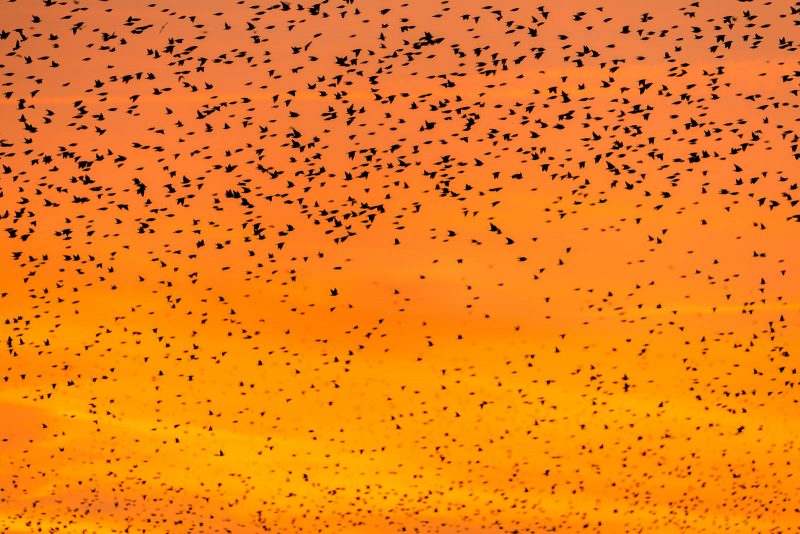 How to photograph starling murmurations

It’s a good idea to take a wide range of lenses with you. Wide angles, medium zooms, and telephoto lenses all have their place. At first you would do well to bring all of your kit. But once you know the kind of images you are after, you can quickly cut back to only take what you need. On most days, I’ll only take two lenses with me. 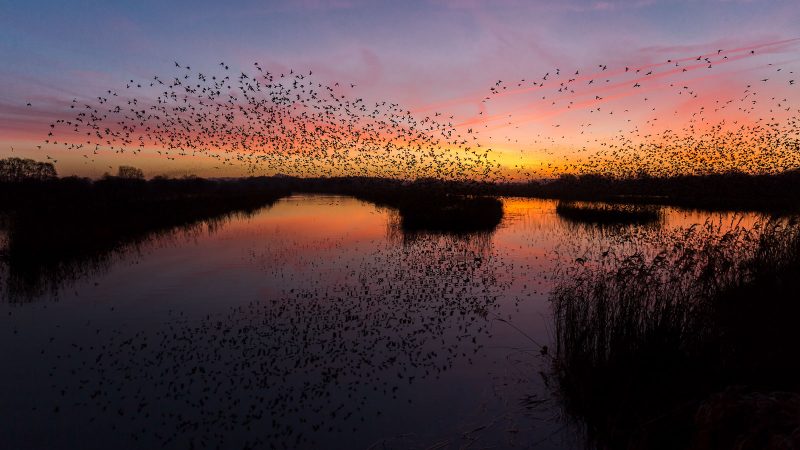 When photographing starlings, you often need to be in the mind of a landscape photographer as opposed to a bird photographer. Wide angles are great for getting the whole scene in the frame. Using long focal lengths such as 300mm or more can be difficult and is often reserved for getting more detailed or ‘arty’ Images of murmurations. Most images you see of murmurations are taken with medium focal lengths as they provide a nice isolating ability as well as being wide enough to get the majority of birds in. 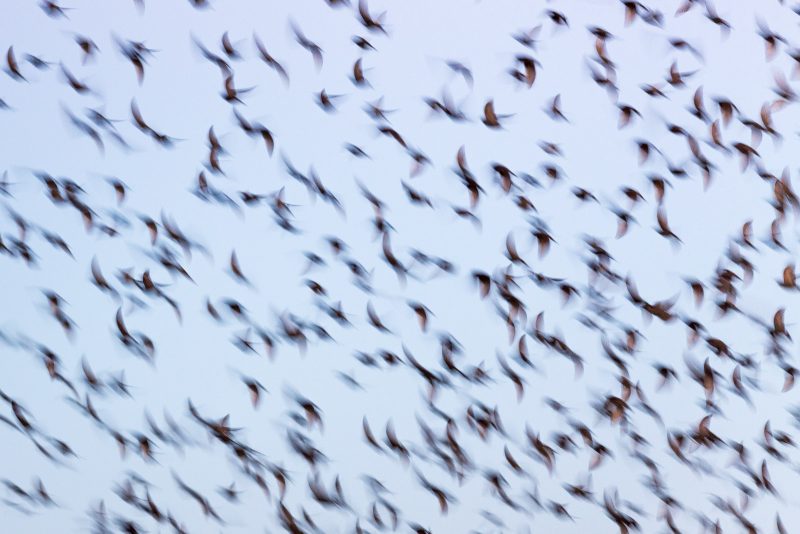 The main issue you’ll face is light, due to the times of days involved with photographing murmurations, so you’ll either need fast lenses or will have to bump up your ISO. One way to get around this is to produce more arty images using slower shutter speeds; this can make for some stunning photographs.

Read more: How to photograph flocks of birds 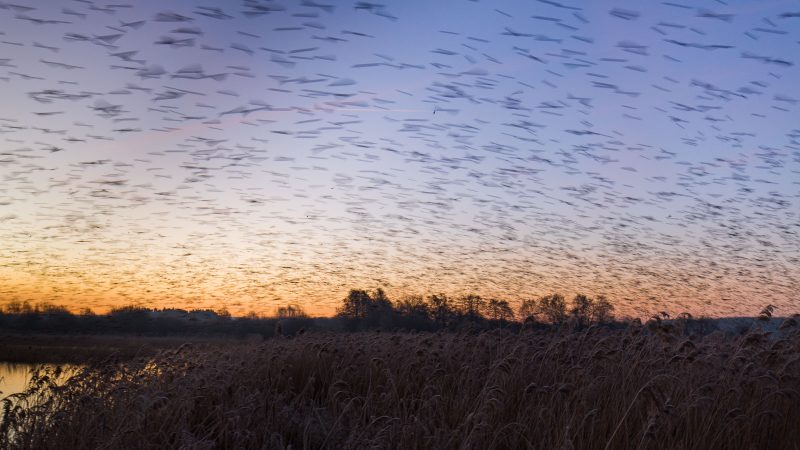 Things to bear in mind

As with all wildlife photography, the welfare of the animal must come first. Don’t go heading into the reedbeds where the birds are roosting, and flying drones is a big “no no.”

Due to the time of year it can also get very cold, so take appropriate precautions, warm clothes, hot drinks… and going in groups can make the experience a lot safer and more enjoyable.