How to Photograph Frogs and Toads in Water 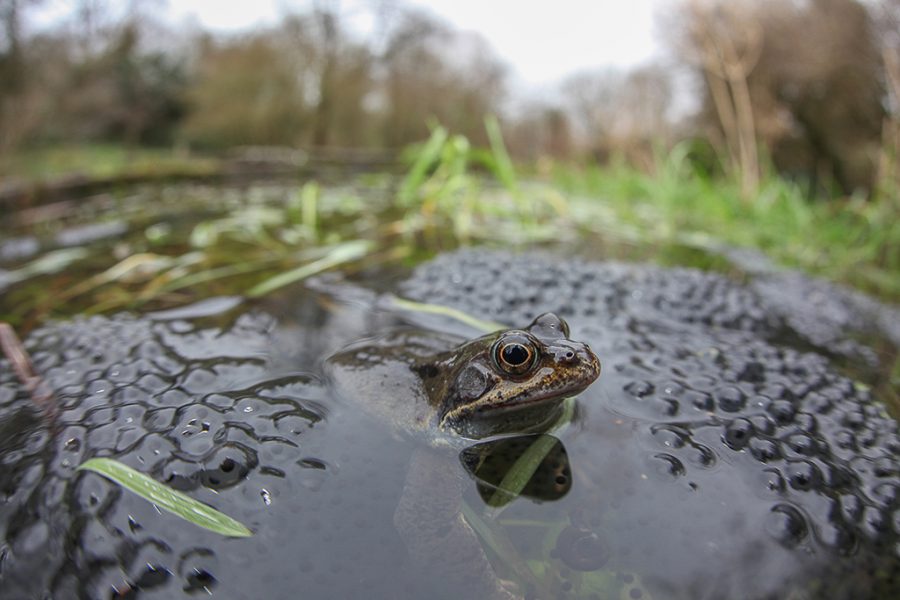 For me, the highlight of the year’s wildlife calendar isn’t photographing red deer rutting on a cold misty morning, nor is it bluebells illuminating a woodland with a carpet of blue. It’s the moment frogs, toads, and newts awake from their winter slumbers and arrive en masse in gardens, ponds, lakes, and even streams to find a mate and spawn, continuing the cycle of life.

Over the years, I have tried many different approaches, techniques, and equipment to be able to capture unique and interesting photographs which tell the story of this amazing spectacle. Below are some basic tips for photographing Amphibians during spawning.

As the winter comes to an end, and temperatures start to rise above 10 degrees Celsius, amphibians start to move away from the safety of their woodland refuges and begin the incredibly dangerous journey back to their ancestral ponds. Check the weather forecast each day and when it’s wet with moisture in the air, and little or no wind, it’s time to venture out to your local ponds and pools. Late February and throughout March is the perfect time for frog and toad photography. 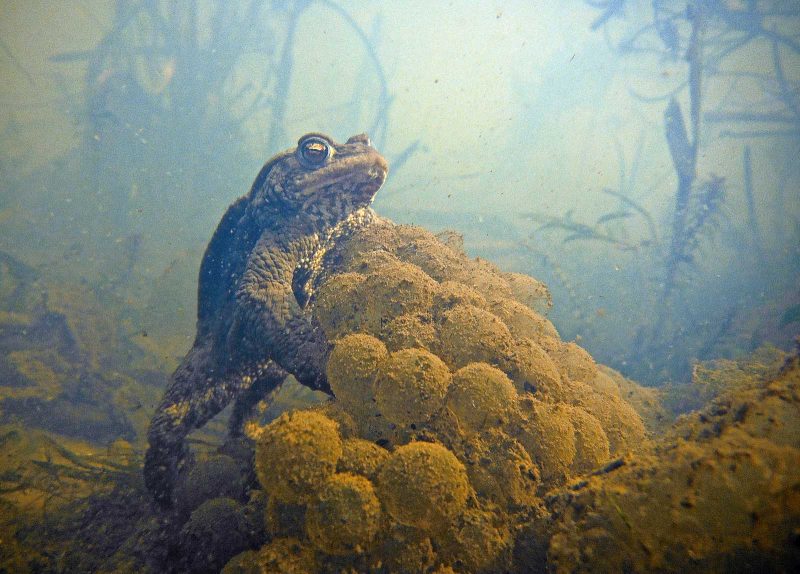 This image received Highly Commended in the British Wildlife Photography Awards back in 2014. It was taken on an entry-level Fuji-film XP50 which cost me £70 on eBay. This shot was really a waiting game, as the frogs had spawned a week before at this location and I had missed it.

I knew in the following days the toads would descend en masse when the conditions were right, so I kept going back each morning until the pond was full of toads. I was really lucky on this day because the light was great – and this is vital for underwater photography. If it is a dull, dark day then your camera may struggle underwater and the images will be dull, flat, and too dark. I don’t use a flash that much as if the water has particles of dirt and sediment floating around the flash will pick this up (known as backscatter) and cause lots of white areas on the image. It also tends to scare off the amphibians and could disrupt their spawning. It’s important not to interfere and put your subjects in harm’s way.

Looking at the pond, I could see a lump of frog spawn underwater and near the bank-side. I thought this would be a really interesting shot, and so I lowered my hand into the cold water and waited for twenty minutes until one of the many toads in the area climbed onto the spawn. I knew I didn’t have long to take a picture, so I took as many as possible because I was having to judge the height of the spawn and the toad from the surface; it takes a large amount of guesswork.

After a few shots, it will become a lot easier to do this and properly frame the image. I took ten shots and only one of them turned out ok. I tend to shot as many frames as possible until the subject has moved, and then I review the images on the camera once it is out of the water. This particular camera has underwater capabilities, if you hadn’t guessed already, and subsequently features an underwater macro mode; I tend to use this for all my spawning images. 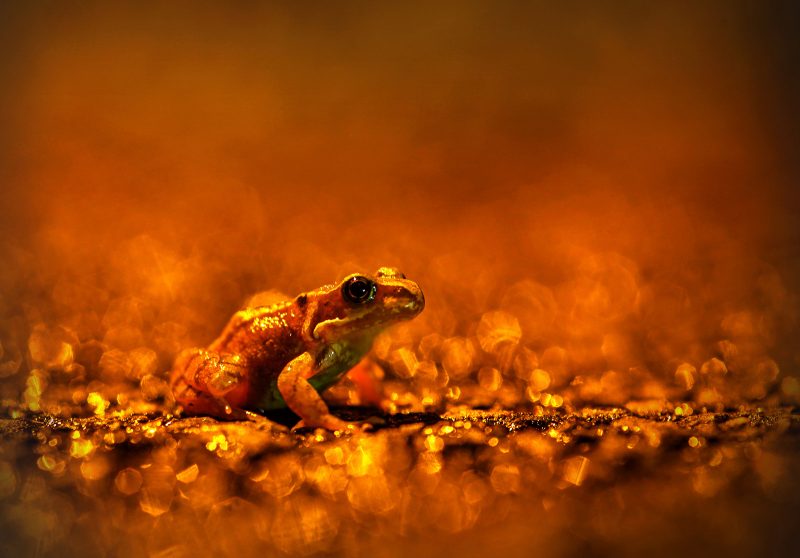 I stumbled upon this small frog whilst putting my bin out late one night after a huge downpour. It was a complete stroke of luck, but sometimes wildlife photography happens like this. It is often said that you “make your own luck”. Another happy coincidence meant that this frog was making its way down the road and heading towards a street light. I knew when the frog was underneath the light it would give it a golden look and feel. I really like using lighting of the urban environment I live in, whether it is from cars, street lighting, or lights from houses; they add an element of uncertainty and excitement as you’re not in control of the light, and sometimes it makes for a creative image.

By using a 5-second exposure time, I am able to give the image a glow and unnatural colour. An aperture of f/4.5 allows me to give the bokeh effect an extra kick, blurring the foreground and background nicely. The water adds extra shapes and textures, bringing some more interest to the scene. This image was taken on a Canon 5D Mark II, with a Sigma 105mm macro lens. 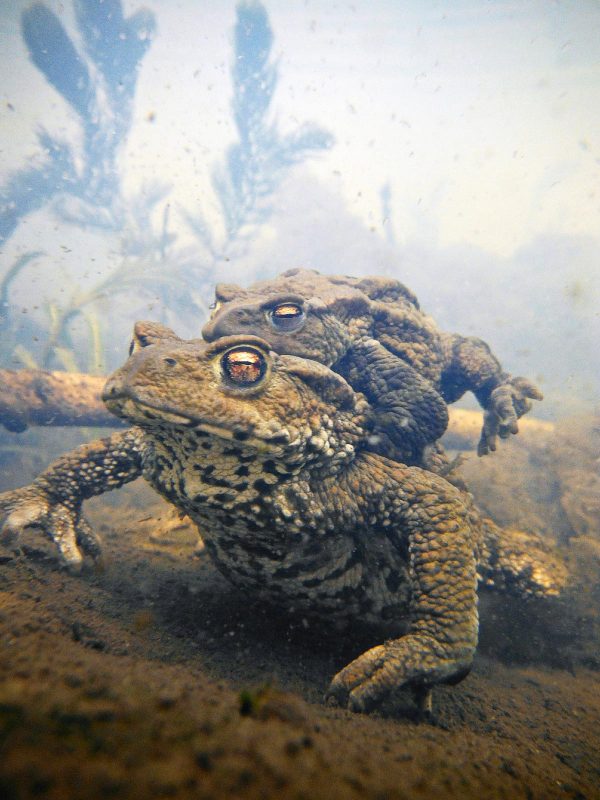 Timing is everything with a shot like this. I had a spent a couple of days at this pond in Bristol, UK, which was full of male toads all waiting for a female. As soon as this female (the larger of the two toads) arrived she caused the male toads to go into a complete frenzy. After a while, she escaped all of her potential suitors and found a quiet corner at the end of the pond. I grabbed my underwater compact (the trusted Fuji XP50) and slowly submerged it in-front of the female.

When doing this, always ensure that you are not touching the bottom of the pond as you can easily disturb silt and ruin the image. With the camera in the correct position, I didn’t have to wait long until a male toad swam over and mounted the female. This was the behaviour shot that I had always wanted to achieve, and I took as many shots as possible before the two moved off to a deeper area of the pond. I took the same approach as before of not using a flash and relying on natural light. Again, the tricky part is judging the height of the toads underwater when I am the surface – everything looks distorted looking into the water, and it’s hard to judge perspective properly. After a while, you soon get your eye in and this becomes second nature. 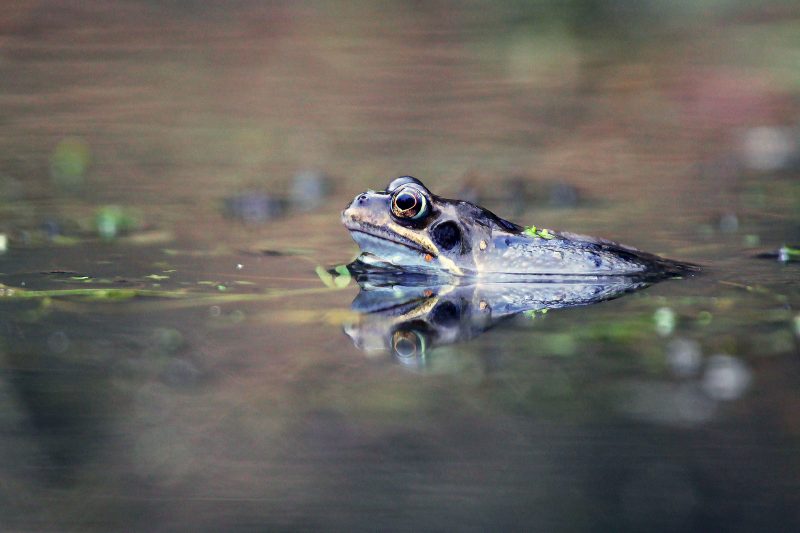 Getting low down, at water-level, with a shot like this really helps. It takes away all the distracting clutter from the background and presents a clean image with lovely tones and textures, allowing the subject to really stand out from its surroundings. When a frog is waiting for a mate it generally hangs around for a while, so you can take your time to frame the subject and play around with the settings to achieve the shot your after.

The urge to mate and spawn is so great with frogs during this period they will try and mate with anything. Each time I tried to take a photo underwater, this frog would attach itself to my camera thinking it was a frog. Maybe the green colour of the camera helped fool this frog! 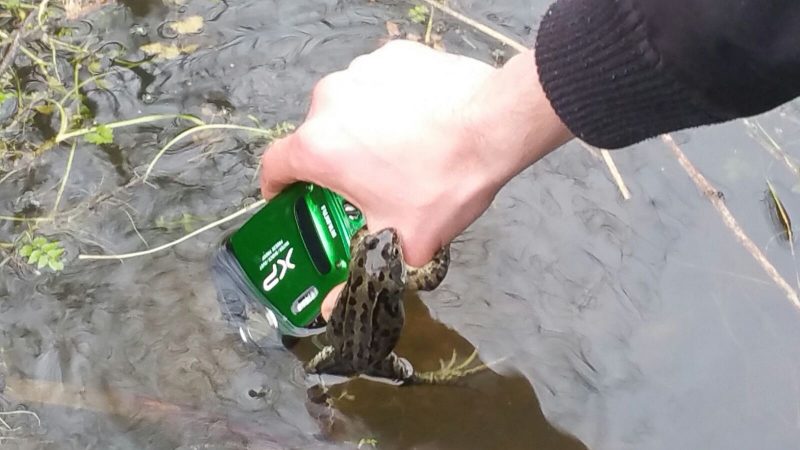 If you follow these simple tips the next time you head out during spring to photograph frogs, I’m sure you will be able to capture some inspiring images. Also, if you want to help your local amphibians when they embark on their dangerous journeys back to their ponds to spawn, have a look for your nearest “toad patrol” and sign-up to volunteer and help them to make the trip back to their ponds to spawn.