How to Photograph Birds in Africa 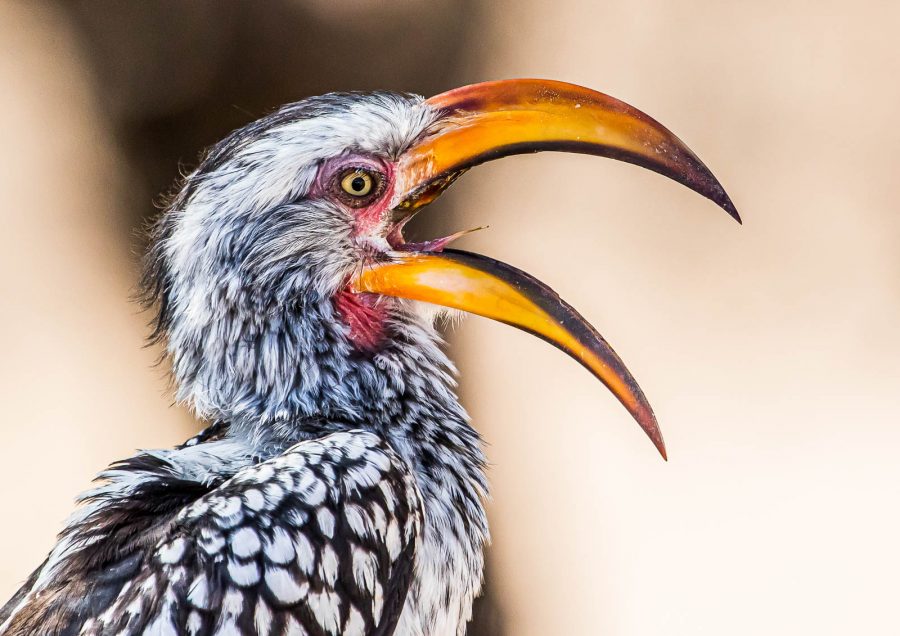 Home » Photography Tutorials » Wildlife » How to Photograph Birds in Africa

Africa has a huge and extremely varied array of birds that spans across all of its countries at different times of the year. Photographers often take flight with the hopes of photographing some of the most iconic birds, but often fall short of these goals due to a lack of knowledge and prior research.

Hopefully, if you’re a keen birder, the following will be useful if you’re planning on photographing birds in Africa.

Variety of birds in Africa

From the large raptors to the smaller waxbills, Africa has an incredibly diverse selection of birds that is rich with photographic potential. 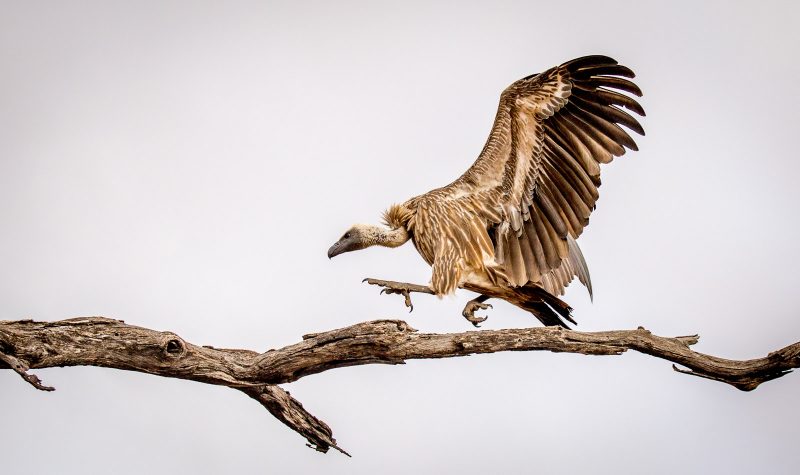 Naturally, as with all wildlife, certain species have become favourites amongst the iconography of Africa, with the hornbills and vultures generally taking most of the limelight due to their presence in the media (Lion King, I’m looking at you).

It’s interesting to note that, above all else, one single bird has classed itself as the most photographed bird in Africa: the lilac-breasted roller.

It’s considered as the national bird of both Botswana and Kenya, but can be found widely distributed all throughout sub-Saharan Africa. Due to its vibrant colours and tendency to perch atop trees, poles and powerlines, it’s an easy and beautiful catch for anyone with a camera. 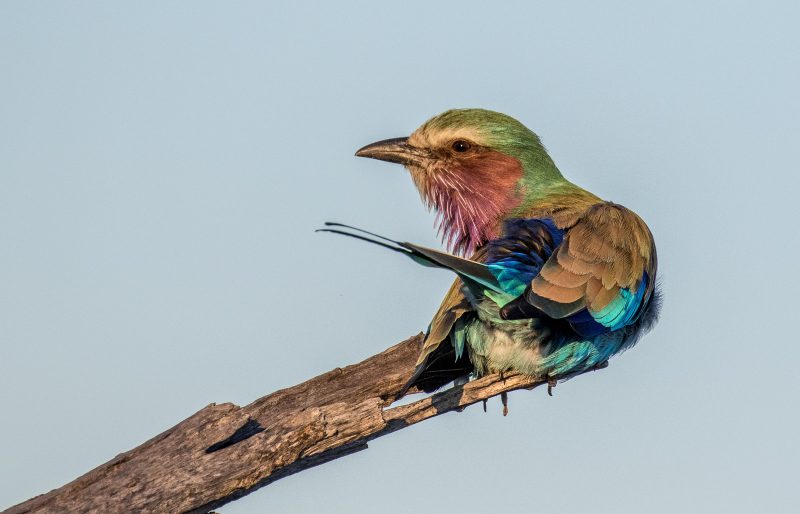 Despite its popularity, however, the lilac-breasted rollers’ numbers are near infinitesimal to that of the red-billed quelea, which is in turn the world’s most abundant wild species of bird with an estimated population of 1.5 billion breeding pairs.

Their large flocks tend to be reminiscent of locusts, and cause widespread damage every year to crops – resulting in them earning the title of Africa’s most hated bird. Despite this, even seeing a relatively small flock is impressive and captivating; often resulting in breath-taking imagery. 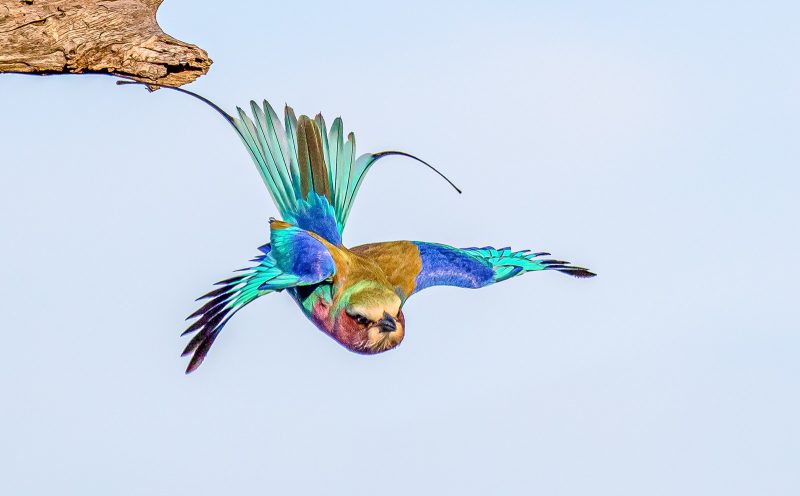 Moving on from the most photographed and most hated, I’m going to touch upon the most under-appreciated: the vulture.

There are 21 species of vulture in the world, of which Africa hosts 11 – and 7 of them are on the edge of extinction. This is due predominantly to loss of habitat, but also due to poaching. Certain body parts are used for traditional medicine and superstitions, and it’s commonly (albeit incorrectly) assumed their presence is a threat to healthy livestock.

In actuality, they’re an essential species to the health of the ecosystems they inhabit. They clean up carcasses, wiping away the threat of disease.

For photography, they’re one of my personal favourites to photograph (especially in black and white) and, when numerous in numbers, can often be an indicator for a nearby kill – which means predators might be nearby. 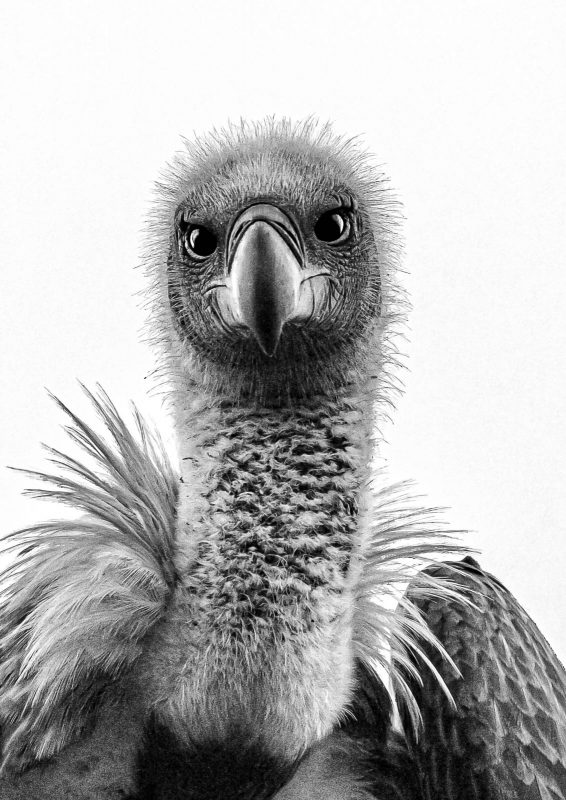 These are just three wonderful examples of birds in Africa, yet there are many more to fall in love with and all can deliver fantastic photographic results.

However, if birds are high on your list of priorities, then it’s best to do your research before jumping on a plane, as many birds are migratory.

The ‘When and Where’ of bird photography in Africa

In South Africa, for instance, the best time for birds is generally considered between the months of October and March, as many migrant species start to return to the area to take advantage of the rainy season and the subsequent effect it has on the country. Many species, such as European bee-eaters and woodland kingfishers will only be found here during this time period; with the pivotal woodland kingfisher being the dominant signifier of summer, its iconic call ringing like a welcoming song to the high temperatures and dramatic rains that the season is well known for.

The huge benefit to this season is also the colours. With flourishing flora and life being breathed back into the bush after winter, the contrast is incredible and being able to photograph beautifully coloured birds against vibrant and lush foliage often leads to almost unbelievably colourful photos which some may question in regards of realism. 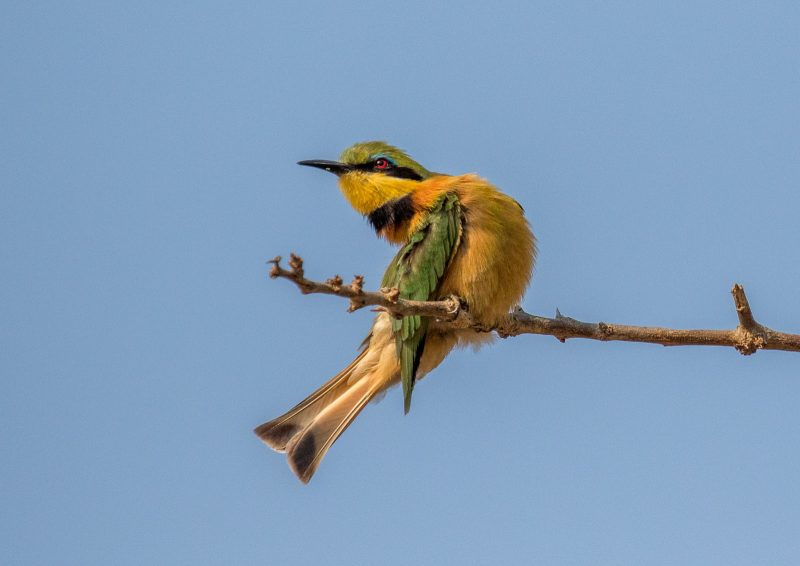 Now, despite knowing the best time of year to photograph birds, the next question is where to go.

This isn’t quite as easy, as different countries and regions are higher in density than others, with certain species being endemic and specific to a certain area. Quite frankly, it all comes down to what you, as a photographer, want to photograph.

The Okavango Delta in Botswana has recorded upwards of 500 species of birds and is arguably one of the very best destinations for birds.

Spotting birds is one thing, photographing them is a whole other ball game. For the best results, there’s a mixture of needed equipment, technicality, skill, and research that’s needed. I’m going to break it down into those three sections for bite size and easily digestible and actionable points. 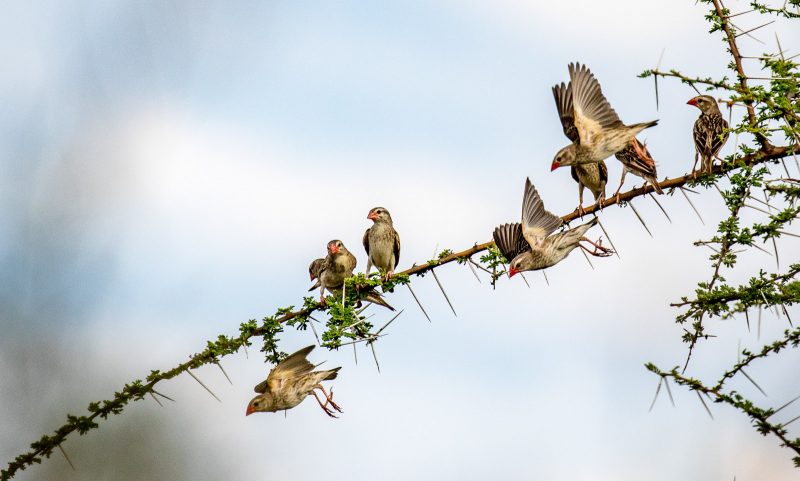 In short: a long lens. Getting up close to birds is difficult, even when photographing from the hidden perspective of a hide, so something like a 400mm or more is advisable for best results.

I shoot predominantly on a Canon 100-400mm, a lens I dearly love, but crop in more often than not on my bird photographs to help them fill the frame.

The popular 150-600mm models from Tamron and Sigma are also great, but just take note that they are often heavy and slow lenses, meaning you may want to invest in additional support (beanbag, tripod, monopod, gimbal) and you may struggle with settings when light is anything other than perfect.

The biggest benefit that these super-zooms offer is that they make it easy to zone in on your subject. They allow you to start out wide, find your target, and then zoom in to fill the frame as much as possible – something you can’t do with a large prime lens. 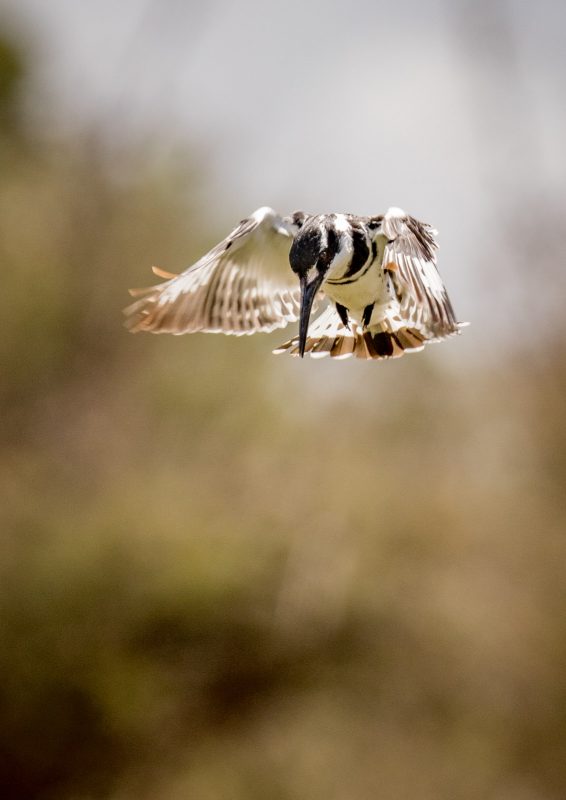 It’s also recommended to use a camera with a fast frame rate, as the more shots you can take per second will give you more options when photographing a bird taking flight. It’s incredibly frustrating to have one image of a bird perched, with the next one having missed the bird entirely; a fast frame rate really does help you get the action shot.

A good rule to remember is that the smaller the bird, the faster it moves. Vultures require a lot of energy to take flight, and then will often glide and ride the thermals rather than actually fly.

Bee-eaters and swallows, however, are as fast as lightning and tracking them is a huge challenge. As such, fast shutter speeds are a must, with 1/4000th of a second being my preferred setting to photograph smaller birds.

Obviously this is light dependent, but even in less than optimal lighting conditions it’s worth pushing your ISO in order to perfectly freeze some of the beautiful and surreal forms and poses these birds often display. 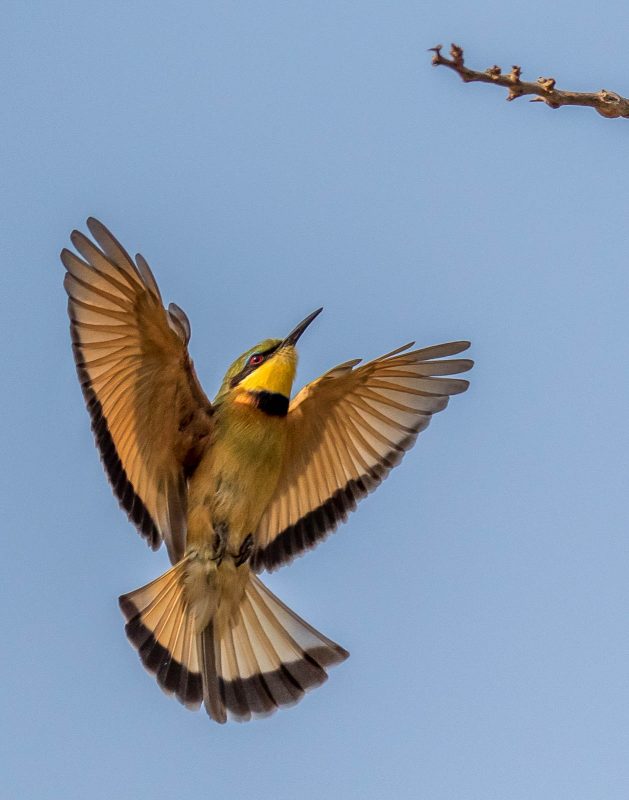 Spot-metering is ideal when photographing birds against a bright sky, to make sure you don’t end up with a dark silhouette against a blue backdrop – you want the detail and the colour of the wings to stand out!

Back-button focusing is, hands down, the best recommendation I can give to anyone wanting to photograph birds. This disables the focusing function from your shutter button, and instead transfers it to the back of your camera (usually the AF button but it can be customised).

This, when used in conjunction with continuous focus, means you can track and focus on a flying bird and, upon landing, let go of the button (to lock focus) and recompose your frame to get the best shot possible. 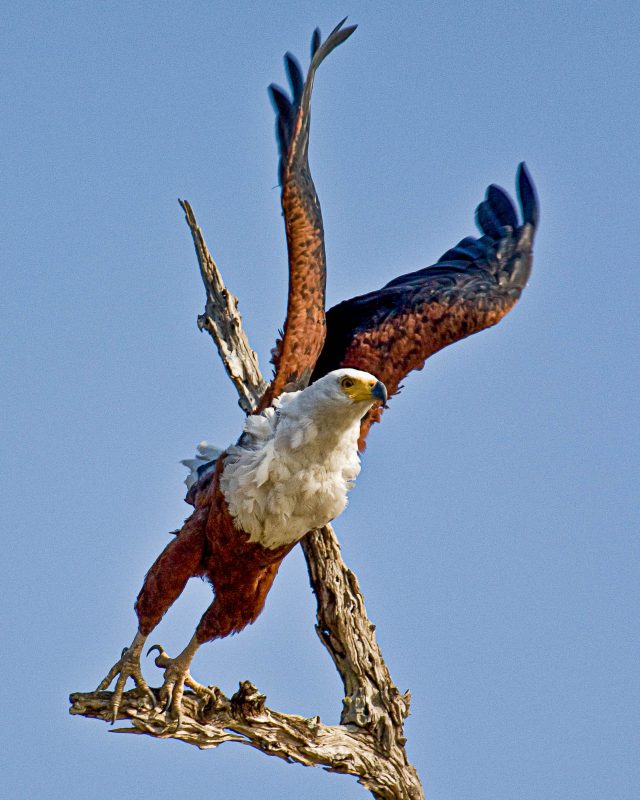 This is a technique that I know a lot of professionals admire, but it can take a bit of practice before it starts to feel natural – but I’ve personally found I’ve doubled my keep rate since converting years ago.

Like any type of photography, the key comes down to practice and gaining skill and experience. Being able to whip-pan your camera and chunky lens to keep up with a fast-flying bird whilst rattling off a dozen images takes time to learn and perfect, and of course different birds require different approaches.

Kingfishers, for as quick as they are, are great to photograph due to them often hovering in the same spot before plunging into the water, and they often return to the same branch too – so if you missed them taking off, you might get the opportunity to photograph them upon landing.

Large raptors often ruffle their feathers and defecate before taking flight (to lighten the load), so this is a good indicator to get ready and prepared for that imminent moment of action. 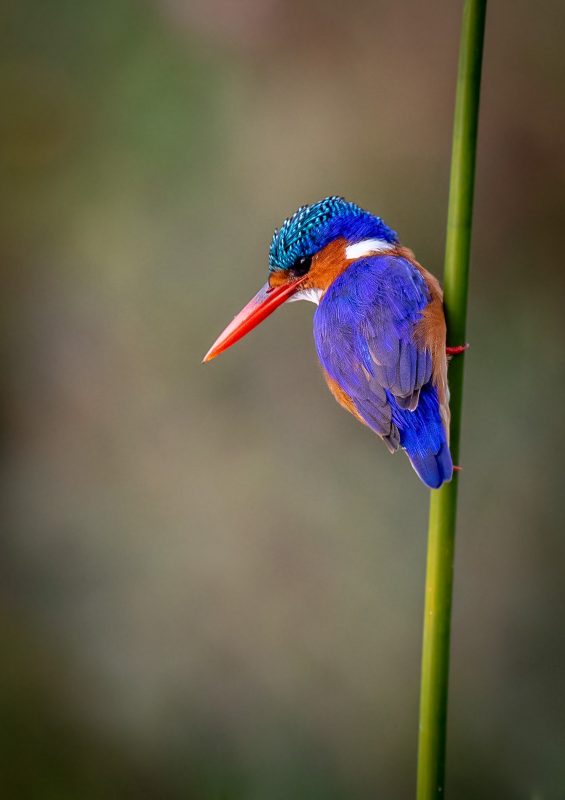 Research is a thing I always insist is an absolute necessity to photographing any wildlife. You can’t expect to turn up at any given time of the year, at any location and go looking for birds without a clue of what you’re looking for or how to find it.

Do some reading, buy a bird book or an app for your phone, or go on safari with a professional field guide who know exactly how to get the best opportunities available to you. 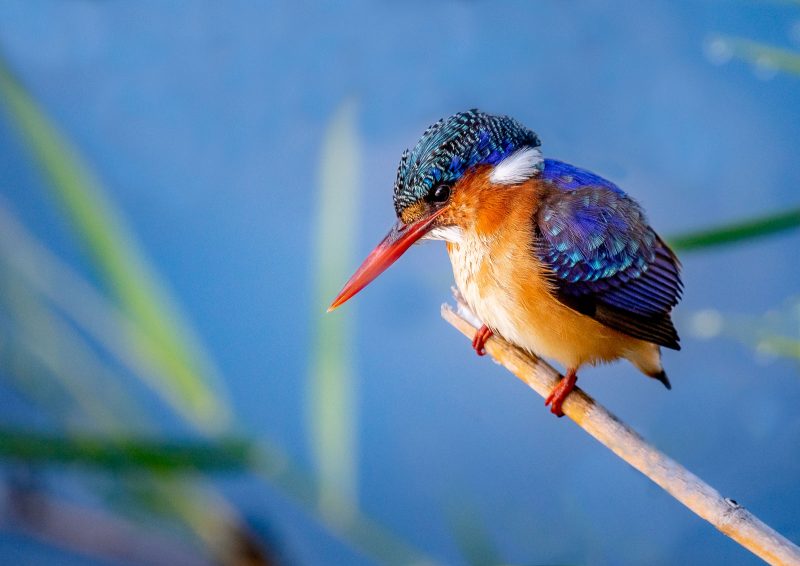 The community surrounding bird photography is one that I’ve personally seen growing in numbers and in passion, and for good reason. It’s incredibly fun and rewarding, with the challenge of checking off new species and getting better and better photographs becomes quite a dangerous addiction.

Living in South Africa, I had a personal challenge to photograph my favourite bird, the malachite kingfisher: a species that I have a love / hate relationship with, due to me finding it difficult to find and photograph them.

Over the years, my sightings increased and during that time I got better photos with each subsequent sighting, culminating in one moment in Kruger where one flew to a reed no more than a couple of meters away.

The buzz of adrenalin and satisfaction was incomparable to anything else I’ve photographed, with it literally taking me years to get to that specific moment. It’s a moment I hold dear to my heart and I see variations of that accomplishment throughout my guests and even online. 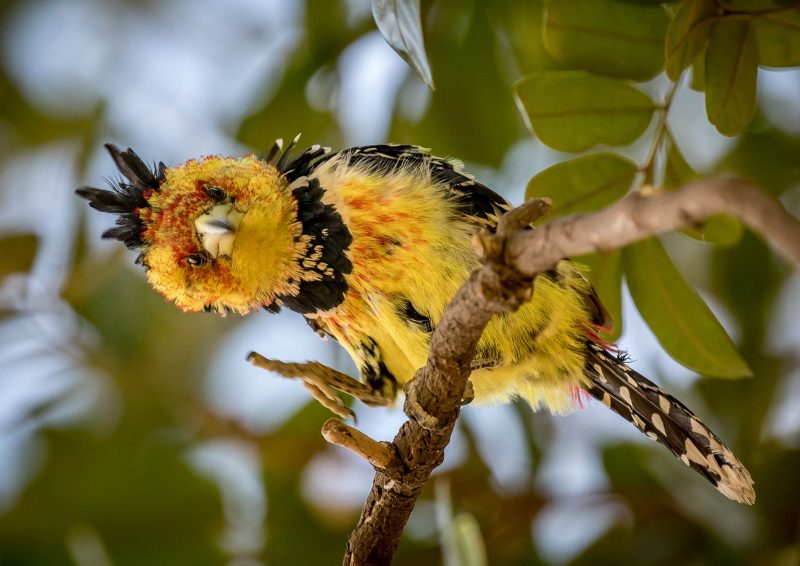 The lucky thing about bird photography is that, in most cases, there are opportunities on your front doorstep. Why wait until you’re abroad to start practising? I’d heavily recommend sharpening and honing your skills on your local bird life so that when you fly out to Africa you’re much better prepared with an already established skill level.

In reality, the majority of photographers who come to Africa do so for the bigger mammals: elephants, rhinos, lions, leopards, zebras and giraffes. They don’t often think about the extraordinary gift that birds have to offer, but it’s always a highlight to see those photographers fall in love and take on the challenge of photographing our winged friends.

They are always the ones that walk away with the most out of their time in Africa, and my hope is that any photographer out there reading this takes the time to consider the wealth of content and joy that birds could bring to them too.