Ethiopian Wolves: Photographing the Rarest Canine in the World 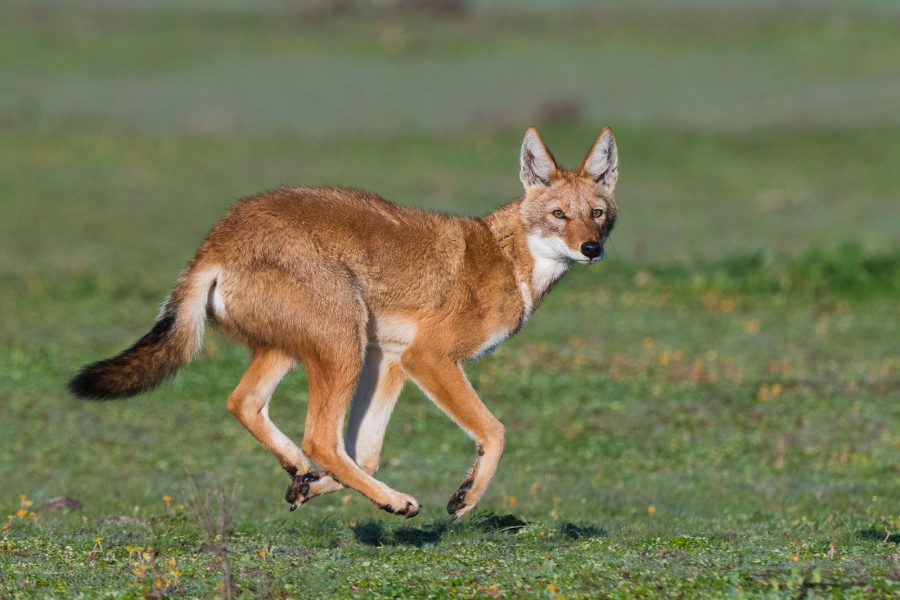 Ethiopia is a relatively overlooked country amongst the wildlife photography community. Whilst it’s home to many of Africa’s “typical” safari animals, I was in pursuit of its more elusive creatures back in May 2018.

Seeking sanctuary at the top of Ethiopia’s mountain ranges, the Ethiopian wolf now numbers at only 500 individuals and is found nowhere else on the planet. Despite a dainty fox-like appearance, they are more closely related to grey wolves than they are to our familiar red foxes. The Ethiopian wolf’s ancestors were once found over a far wider area than they are today, back when Africa was colder and their favoured afro-alpine habitat was more common. As East Africa warmed up, they were forced up Ethiopia’s towering peaks, where they can now be found on the high plateaus. Here they’ve now specialised to feed on high-altitude rodents and, whilst still social pack animals, they split off during the day to hunt rats individually. 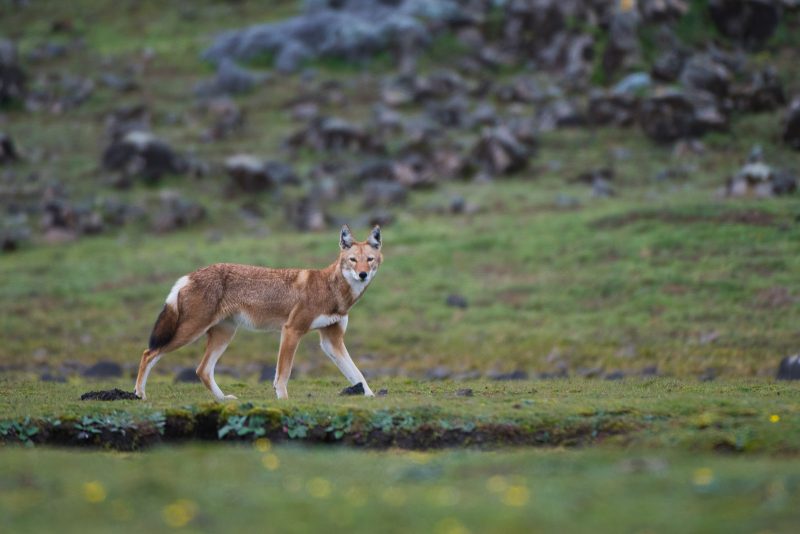 However, all is not well for Ethiopian wolves. Rabies and canine distemper plague is decimating what’s left of the 500 wolves, broken up into many isolated populations across the country. With Ethiopia’s growing human population, more and more people are pushed up into the mountains, bringing their dogs with them. The diseases are an epidemic in Ethiopia, and so they are frequently transferred to the wolves by wandering domestic dogs.

Working with Biome Productions, I co-produced a ground-breaking Virtual Reality (360°) stereoscopic film for The Born Free Foundation, looking to use this exciting new medium to share the story and raise awareness of the greatest threats to these unique animals. One of my duties was to be the film’s official photographer, documenting the shoot for promotional purposes on its release.

Our four-man-strong production team set off on the arduous journey to the Bale Mountains, a 10 hour drive through rural Ethiopia. Across this transect, the stats I’d seen of the country’s enormous population growth became reality. However, eventually we caught our first glimpse of the mountains and the excitement immediately began to set in. We saw our first wolf surprisingly quickly, along with hundreds of rats running for cover, massive lammergeiers flying overhead, and bizarre lobelias (a flowering plant) growing around us. The Bale Mountains truly is an extraordinary place.

Based in a camp at the top of a small glacial valley 3,600m up, home comforts weren’t an option. Half of the team’s tent bedding was ridden with bed bugs, a hole in the ground was our shared toilet, and -5°C temperatures were an almost nightly occurrence. But, being in such a beautiful landscape with Africa’s rarest carnivore, these realities were quickly overlooked. 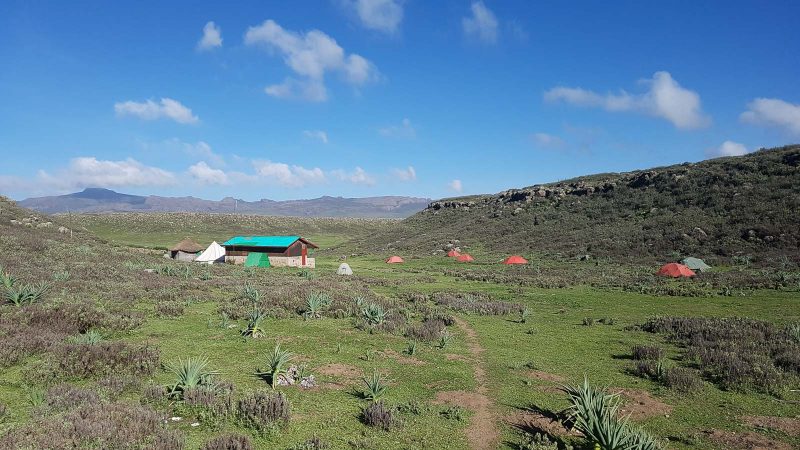 The challenge for me photographically on this trip was squeezing in enough time for some decent photography around the tightly-knit filming schedule. I saw some simply epic scenes which I just couldn’t photograph as it was my priority to be operating the 360° camera.

On my first drive one morning there was a frost cloaking the plateau, and the first light was just creeping over the mountains. A pack of wolves ran up to the vehicle, stopped at about 10m from the car and went through their morning rituals of grooming and licking one another before heading off individually to hunt for the day. As I was setting up our 360° camera, it was agonising not to take some photos!

As the days went on and the 360° shots began rolling in, our drives looking for wolves became more relaxed. This is when my photography of the Ethiopian wolves started to become a little more productive. 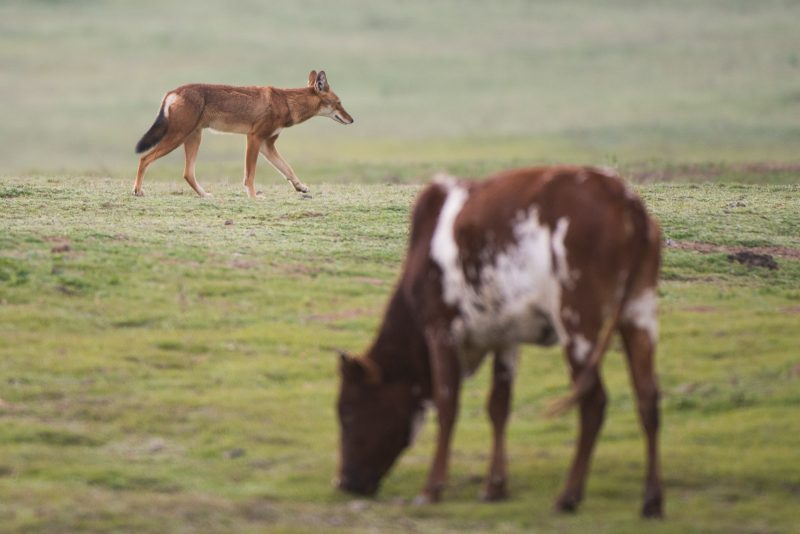 I like to tell stories in my photos, and this one is a great example of that aim. Here I am illustrating another threat to the wolf – habitat loss. The wolves follow herds of cows on the plateau, using them as cover to catch their rodent prey. But overgrazing from cows also eliminates the habitat of the rodents, and therefore the wolves too. 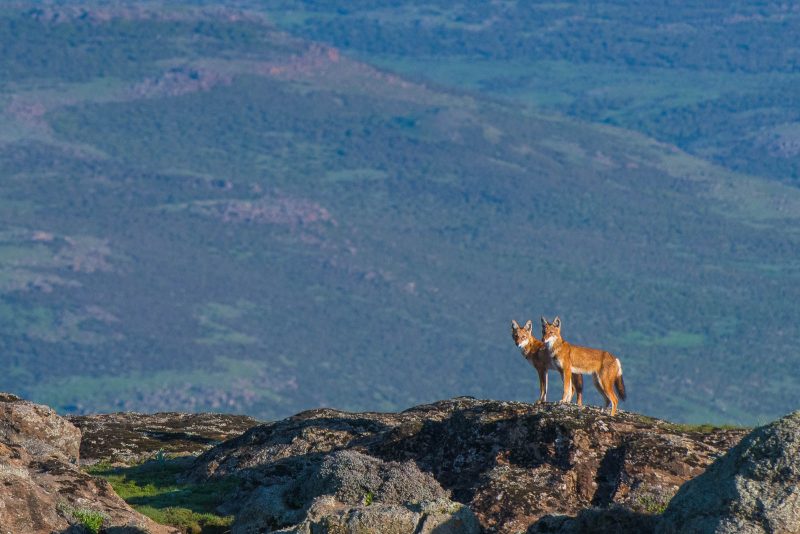 I’m a huge fan of photographing animals in their environment. It’s a great way of presenting your subject in perspective of the wider landscape and providing some context for it. Having such dramatic, beautiful landscapes combined with an iconic species helps too! This kind of photography can make your life much easier; you don’t have to get as close to your subject. 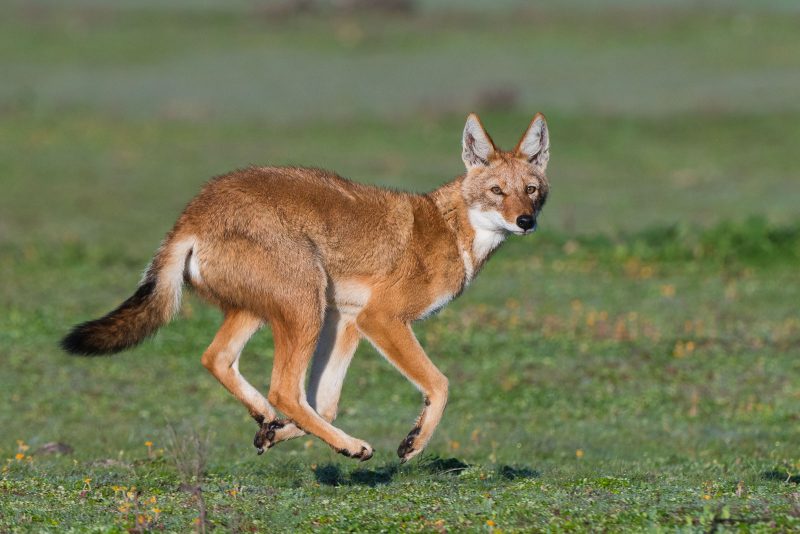 This was one of my most exhilarating encounters with the wolves. The team and I had just placed a 360° camera on the ground and were praying that one of the wolves would be curious enough to approach it for a closer look. Instead, it veered around the camera, running straight towards us. We were tucked away in vegetation and it seemed to not have seen us. When it was within only 10m or so it finally caught sight of us, and sprinted off immediately! This photo is my souvenir from that moment.

I was working on aperture priority mode at f/5.6, slightly higher than I’d usually go to boost my odds of a sharp photo, without compromising the shutter speed too much in the strong sunlight. 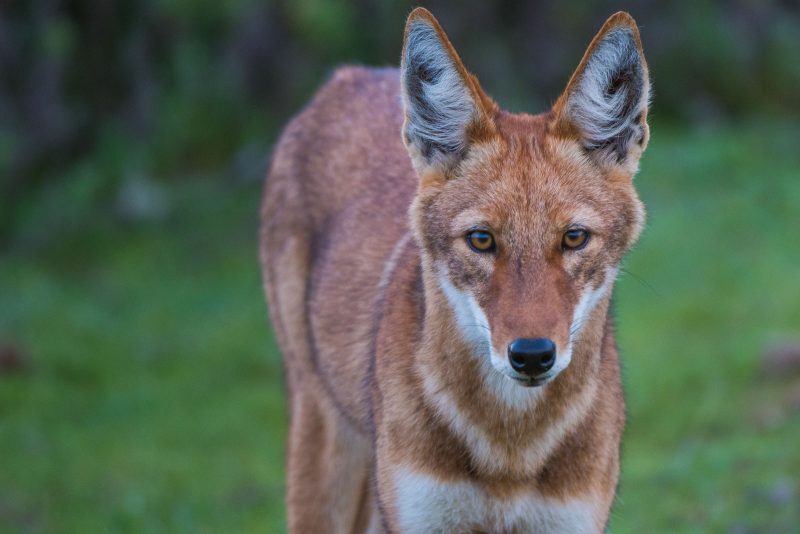 We purposely chose to film the wolves in May, when the cubs were old enough to leave the den, but were still curious enough to come for close encounters with us and our cameras. This particular shot was taken on our last evening with the wolves and proved to be our closest encounter. A pair of cubs came extremely close to our vehicle seemingly out of pure inquisitiveness. Frustratingly, the light had died down for the day and I had to shoot from the car window, something I always find extremely restrictive. But it was an epic opportunity to get close up shots of the wolves. 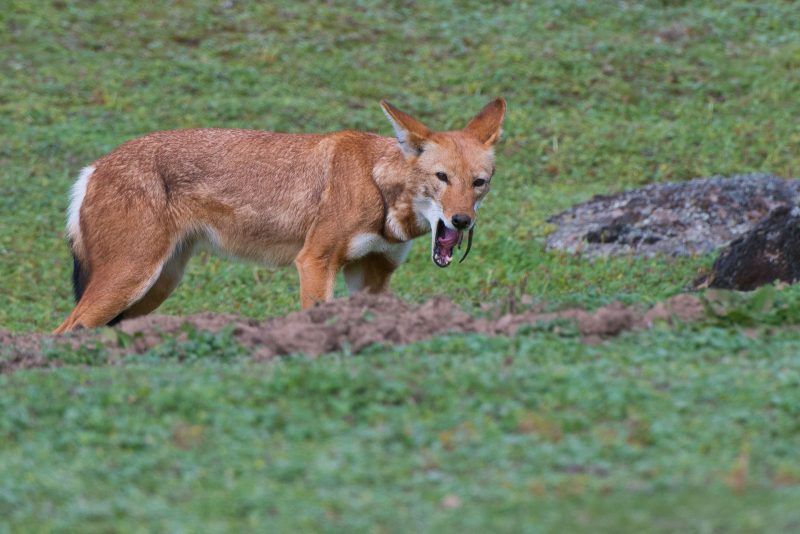 Yes, that is a rat’s tail dangling from its mouth! This wolf had just successfully stalked and killed a rat right in front of us. Unfortunately, all we could see the entire time was its bottom, as it was prowling away from us. Just as it was about to swallow it, it turned towards us. Whilst not the best shot photographically (the background and foreground were too close to the wolf and the light is boring), the behaviour carries it. 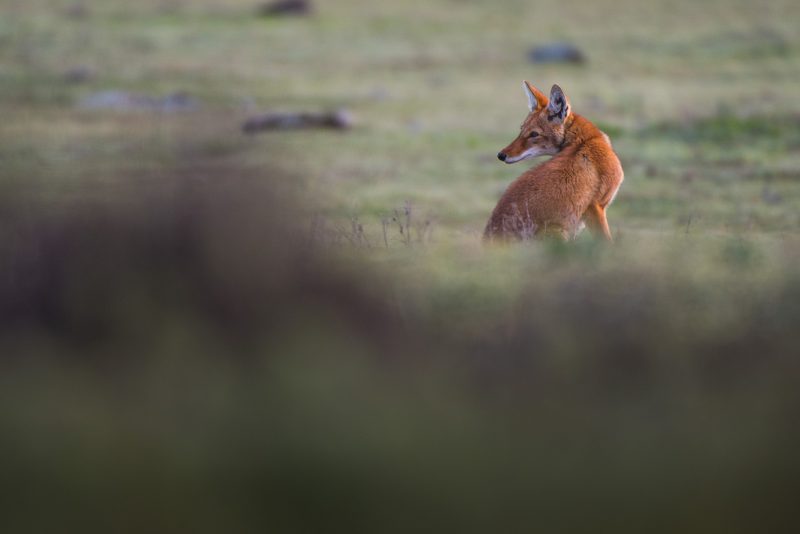 This is one of my favourite shots from the trip and a perfect example of thinking outside the box with regards to composition. By moving position slightly in the bushes where I was hiding, I used them to eliminate a less blurred expanse of grass which would’ve been in the foreground. When I was pleased with my framing, I simply waited for an interesting pose in the fading evening light, and this was my reward.

I’ve been lucky enough to go to a number of amazing places in the world, but the Bale Mountains of Ethiopia was particularly special to me. It’s such a stunning landscape, which is rarely ever visited photographers and tourists. There’s a real risk that the landscape, and its wild inhabitants, will be a thing of the past in a few decades.

I highly recommend that you visit the area yourself with a local guide. By doing this, you will support local ecotourism initiatives which can provide an alternative source of income for local people. If you can, please donate to the conservation efforts of the Ethiopian Wolf Conservation Programme: the Ethiopian’s wolf last hope.

You can watch the film I made with Biome Productions here: