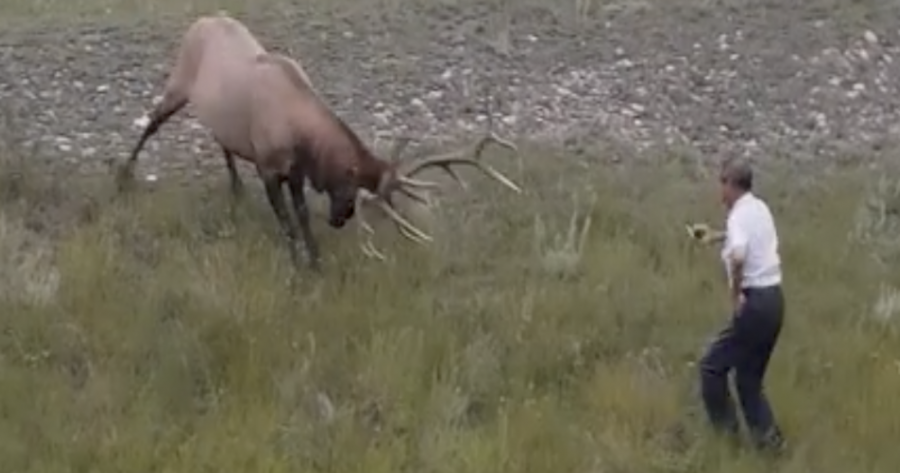 Photographing wild animals can be a risky business, so most of us know to be respectful and keep our distance when out on a shoot – for the safety of all involved. Unfortunately, this doesn’t stop some people from breaking these  rules, and causing a hoof load of trouble in the meantime.

One such individual was recently spotted in Alberta’s Jasper National Park, Canada, getting up close and personal with a bull elk.

Sundog Tours guide Kendra Neef Nance was busy touring with a group, watching a large elk safely from the roadside. All of a sudden, a man outside of their group decided to approach the elk, waving what appears to be a small camera or smartphone in its face.

Understandably, the elk becomes frustrated by the obnoxious action, and begins to stamp and wave his antlers – which is a clear sign of agitation in the species. The man acknowledges this threat and begins to flee, albeit whilst laughing and jeering at the actions of the animal.

Nance caught this brief video of the incident, seen below:

The highlight of tonight's wildlife tour ?

“This man was not one of my guests,” Nance told Petapixel. “We were viewing this elk and his harem when this man approached. I shouted out the window at him multiple times that it was dangerous and recommended he return to his car. He laughed and waved at me saying it was fine, and that’s when I started recording.”

Despite ending without incident, Nance said that the man was “extremely lucky” to not get hurt, and that if he was injured, the elk would likely have to be humanely put down in the interests of “public safety”.

According to Nance, this type of disturbance happens frequently in the park, and is a huge risk – especially during mating season.

A photographer was recently killed by a Hippo whilst recently on safari in Kenya, giving a stark reminder of the real dangers of interfering with wildlife for the perfect shot.