Yes, the Butchered Rhino Photo DOES Deserve to Win WPOTY 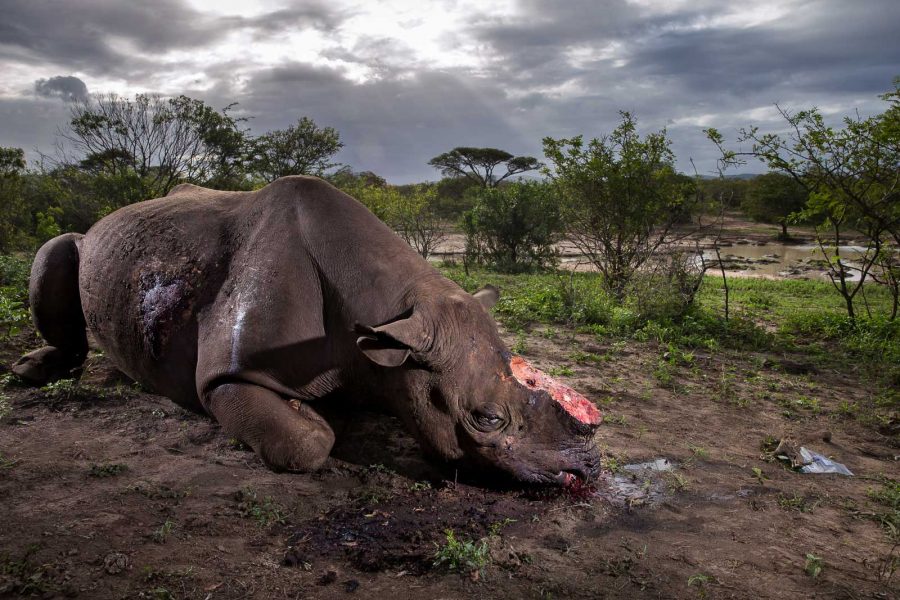 On the 17th October, 2017, the Wildlife Photographer of the Year competition announced the winner of its 53rd annual competition. That winner was Brent Stirton, and the image was probably one of the most emotionally shocking to ever be awarded the most coveted prize in nature photography.

The photo of a black rhino with its horn brutally cut off, laying dead in the dirt in South Africa’s Hluhluwe Imfolozi Game Reserve, immediately polarised onlookers online. Whilst some celebrated the fact that the spotlight had been moved onto the threat of poaching to black rhinos, many others were shocked to see the image in their social media feeds.

The thought that such a shocking photo of a dead animal “did not deserve” or “should not have been awarded” the overall prize in a wildlife competition was a relatively common one online.

One person commenting on the image suggesting that it “would have been nice if it had [been alive].”

Another comment stated that the awarding of the image was “wrong,” both by the judges and the photographer. In fact, this person went as far as to say “shame on you” to the competition and Stirton, stating that this shouldn’t be “deemed as acceptable.”

It’s comments like this that reflect the surprisingly large group of people who wish that everyone would just shy away from the inconvenient truth of wildlife exploitation and pretend everything was pretty and perfect.

Well, I’m sure if the rhino was alive today he would apologise for his poor attire. Not.

However, for every negative comment, there were a number of positive ones.

Yes, it is a brave move from the judges of Wildlife Photographer of the Year. But it is a necessary one.

Black rhinos are critically endangered, teetering on the edge of extinction. Whilst conservationists and those interested in the natural world may already support the prevention of wildlife crime, there are a huge number of people who simply do not know about it, or prefer to turn a blind eye because it’s “too horrible to think about.”

In 1993, there were only 2,475 black rhinos left according to the WWF. Now there are around 5,000 thanks to conservation efforts. But poaching continues. Rhino horn is sold mostly to China and Vietnam where it is used in “traditional” medicines – the addition of rhino horn has no effect, by the way.

This image will now be thrust, by force, into the sight of millions of people around the world. That, in my opinion, is a necessary move. Frankly, so what if it upsets people? That’s what it should do. Why should we ignore something like this just because it’s horrid to look at? That poor rhino is laying dead in the dirt, as have thousands of rhinos before it. It has to stop.

To those who think that this photograph did not deserve to win because it is of a dead animal and isn’t alive, because “surely” that is what wildlife is all about, I say this:

Wildlife photographers have a duty to promote and protect the natural world, in whatever little way we can. The job description of a wildlife photographer no longer means shooting just the pretty, “convenient” side of nature. We must shine a light into the very, very dark places where wildlife crime and exploitation hides.

Winning wildlife photos do not need to be pretty. A good photo has a strong message and a story. A great photo should evoke emotion. An amazing photo should leave people shocked – for whatever reason – and that’s what this photo does perfectly.

I hope that this photo appalls and leaves its mark on everyone who sees it. Maybe then we will see the beginning of real change. Real change that spells the end of wildlife crime like this.

My congratulations go to Brent Stirton, for an image that I am sure he wishes he never had to take, and to the judges of Wildlife Photographer of the Year for being brave enough to award such an image in the competition.

If you want to support rhino conservation, Brent Stirton and many other high-profile photographers have started a Kickstarter campaign to launch a new book, Photographers Against Wildlife Crime. The book will be published in English but also, crucially, in Mandarin for distribution in China.

Please consider supporting them, and the black rhino, with this brilliant initiative. Here’s some more information:

Agree with this article? Please take a moment to share its message far and wide.