Formed over millennia, the Greater Yellowstone Ecosystem is the largest area of pristine wild land in the continental United States and is considered to be one of the world’s finest ecosystems. At its heart is Yellowstone National Park, a world first, that rates as one of the finest locations for wildlife and landscape photography in North America. Lying predominantly in the western state of Wyoming, but straggling Montana and Idaho, Yellowstone contains a treasure trove of wildlife from primitive bacteria that form colourful mats around the Park’s thermal waters to the grey wolf, reintroduced in 1995.

Yellowstone was formed by three climate-changing cataclysmic volcanic eruptions. The last, around 640,000 years ago, released more than 1,000 cubic km of rock and ash and led to the extinction of some species. The 1km deep caldera left behind has since been mostly ‘filled-in’ by subsequent less violent eruptions but this is a continually evolving process.

With over 300 geysers (two-thirds of the world total) and over 10,000 geothermal features, the Yellowstone Caldera remains the largest volcanic system in North America. Add to these thousands of small earthquakes every year and you get a sense of the massive geologic forces that are taking place just beneath the surface of this ever-changing landscape. And it is this intense geothermal activity coupled with the wealth of wildlife riches that makes Yellowstone such a fascinating location to visit.

A visit to Yellowstone is a rewarding experience for photographers at any time of year, but with over 3 million annual visitors it can be crowded during the popular summer months. For this reason it is advisable to plan your trip sometime between end of September and March, when the wildlife and scenery is arguably at its best and you are less likely to be standing alongside dozens of other photographers whilst taking your pictures. That said, if you are prepared to walk just a few hundred meters from any parking area the number of human companions you can expect to see will reduce dramatically.

I have been fortunate to make a number of visits to Yellowstone in spring, autumn and winter leading a photo tour group. Several of these visits have been at the end of September / early October to coincide with the autumn colour and elk breeding season when the stags engage in their macho rituals. This is a great time to visit as you stand a good chance of seeing all the megafauna species including bison, elk, pronghorn, bighorn sheep, coyote, bears and wolf set against the changing backdrop of autumn and the prospect of the early snow.

But of all the seasons, winter remains my favourite time to visit. It is during the frigid months of November to March that the Park takes on a whole new persona, bearing little resemblance to the frenetic activity of summer. Blanketed in deep pristine snow, the landscape is quiet save for the honking of ravens and the haunting howls of coyotes and wolves. The mass of visitors have long gone, the roads that remain open are almost deserted and there is a real feeling of untamed wilderness.

A visit to this exquisite winter wonderland is a totally different experience than at other times of the year, and although the range of wildlife species you’ll encounter is more limited, the settings are truly magical. There is a downside to a winter visit in terms of logistics, since most of the roads within the Park are closed between November and May. The North Entrance near Gardiner, Montana is always open though, which provides access to Mammoth Hot Springs and onto the Lamar Valley – two spots that you should include whatever season you visit.

Out with the northern section of the Park, access to other areas is by either snowcoach or snowmobile. There are a number of winter service providers that operate guided snowcoach and snowmobile tours from mid-December to mid-March depending on weather and snow conditions. It is no longer possible to take unguided or private snowmobiles into the Park, although you can cross-country ski or snowshoe on designated trails if you are feeling particularly energetic.

Often the best way to get the most from a winter visit to Yellowstone is to join an organised photographic tour either from the UK or US. This can often work out cheaper as all the logistics and driving is taken care of by experienced tour guides, leaving you to concentrate on capturing some great images. Look for tours that include the Lamar Valley, Old Faithful (Upper Geyser Basin), the Grand Canyon of Yellowstone and the Hayden Valley as part of their itinerary.

Of all the attractions of winter, none are more dramatic that the spiralling towers of steam that billow high into the air, their magnitude exaggerated into giant columns of steam by the sub-zero conditions. The concentration of geysers in the Upper Geyser Basin makes this an especially rewarding location. I’d recommend booking at least one night at the Old Faithful Snow Lodge as this puts you right on the doorstep of this cauldron of geothermal activity and means that you can shoot at dawn and dusk for the best light.

Castle Geyser is a favourite for many photographers, and is well positioned for capturing spectacularly backlit steam at sunrise. The ‘castle’ of mineral deposits provides added interest and the boardwalk here goes very close so you are able to include the water run-off in your pictures. And although Castle Geyser only erupts approximately every twelve hours, steam spews from its cone almost constantly so there is always something interesting to photograph.

Approximate eruption times for many of the active geysers are posted in the very well appointed visitor centre from where you can access most of the Upper Geyser Basin on foot via a series of boardwalks. A full day will allow you to see and photograph a wide range of features that also includes some fantastic hot springs fringed by colourful heat-loving bacteria.

Other geothermal hot spots include Midway Geyser Basin where you’ll find the most colourful of all Yellowstone’s features, Grand Prismatic Spring. Best viewed from above it is possible to shoot this hot spring from a nearby hillside, but access in winter is difficult so you may want to concentrate on closer abstract views from the boardwalk. Norris Geyser Basin is also worth checking out, as are the many other geothermal areas that you’ll encounter if you take a snow coach tour.

Aside from the thousands of geothermal features, you can’t fail to be equally inspired by the myriad other photo opportunities that abound within the Park. Cloaked in a pure white mantel, Yellowstone has endless potential for simplistic graphic landscape images of isolated frost-encrusted trees and burnt forests in addition to towering mountain peaks and frozen waterfalls. Or if you like abstract close-ups, head for Mammoth Hot Springs with its ever changing travertine terraces formed by the slow accumulation of minerals. A great subject on an overcast day. 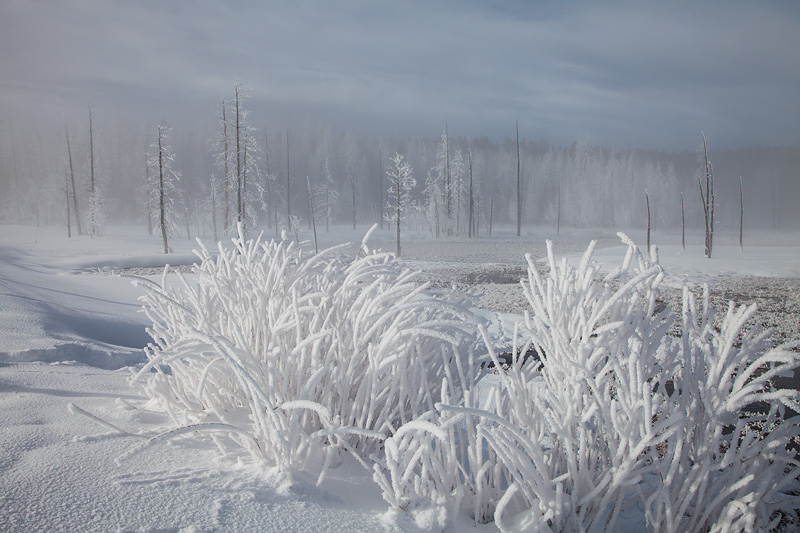 And of course there is the wildlife! Bison are the most ubiquitous of all the large mammals within the Park and are likely to be found along the Lamar Valley, Hayden Valley, Fountain Flats and around the warming geothermal basins. Herds of 100 or more are not uncommon and you’ll inevitably ‘bump’ into some of these along the snowcoach routes, as they like to use these thoroughfares for an easier transfer between grazing areas. These mammalian bulldozers are perfectly adapted to the harsh winter conditions swaying their massive head and neck from side to side to reach vegetation buried deep beneath the snow.

Wolves were reintroduced into Yellowstone in the mid 1990’s, having been previously hunted to extinction in almost all of the Lower 48 states. But now with the top predator in place the ecology of the Park has been transformed and the natural balance of predator and prey re-established. Wolves are seldom seen but winter is by far the best season for sightings and with patience and luck its possible to photograph them close to the road, most often early in the morning after an overnight kill. Regardless of whether or not you are privileged to see one, just knowing that wolves are there or better still experiencing their hair-raising howls is a something to savour.

Since the return of wolves, coyote numbers have decreased due to competition but these canines are still regularly seen hunting for voles on the snow-covered meadows, sometimes jumping high into the air and plunging head first through deep snow to reach their prey. Red foxes, along with many of Yellowstone’s inhabitants, have also benefited from the change in top dog and are now commonly seen employing similar hunting techniques to their larger relatives. Dressed in their thick winter coat they look superb showing little concern for humans as they quietly go about their daily patrols.

Alongside these charismatic carnivores, there are small numbers of elk (the mass herds migrate south in winter), mule deer with their comical over-sized ears, pronghorn, bighorn sheep and otter. Bobcat and even mountain lion are not unheard of and postings of their whereabouts plus anything else of note, especially wolf sightings can be found at visitor centres, National Park ranger services and some hotels. Most folks you’ll meet are also usually very willing to share information about sightings.

I could go on but I think by now you’ll have realised that Yellowstone is a very special place. It is unique in so many ways and represents one of the greatest natural wonders on the planet. Any of its multi-faceted attractions alone would be reason enough for a visit but add them all together and you have a spellbinding array of photographic potential. If you haven’t been, put it high on your list. Trust me, you won’t be disappointed!

More information about planning a trip to Yellowstone can be found here.