Winners: Underwater Photographer of the Year 2017 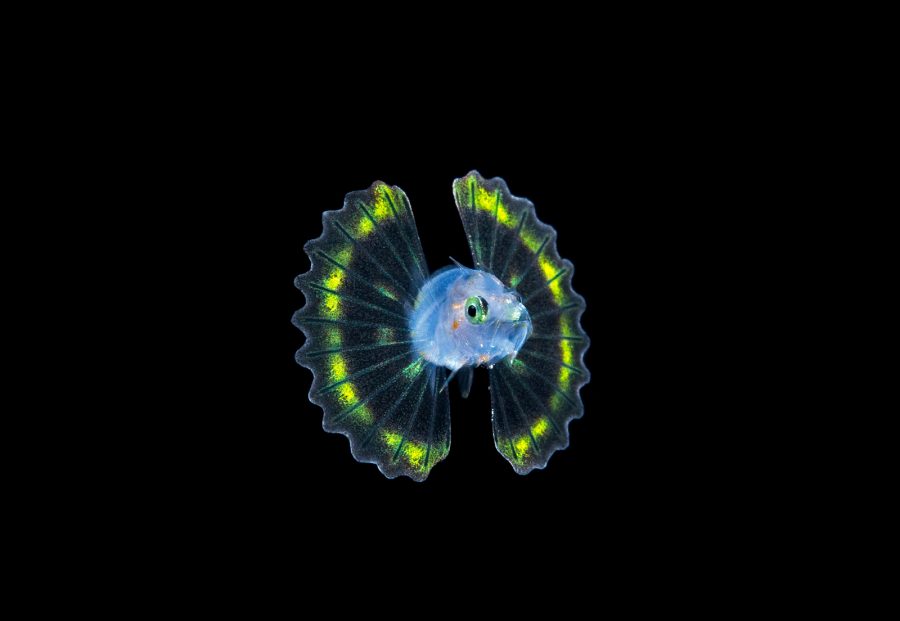 The “Dancing Octopus” photo was taken in the lagoon of the tiny island of Mayotte in the Indian Ocean. Barathieu explains “I had to wait for a low spring tide when the water was just 30cm deep (1 foot) so that the octopus would fill the water column. I got as close as possible with a wide angle lens to create this image, which makes the octopus look huge.”

“Both balletic and malevolent, this image shows an octopus that really means business as it hunts. The way it moves is so different from any predator on land, this truly could be an alien from another world,” commented competition judge, Alex Mustard. “It was taken in knee deep water, showing that underwater photography is open to anyone who is prepared to dip their toe in the water.”

The title of British Underwater Photographer of the Year 2017 goes to Nick Blake, who lives in Dublin, Ireland, for his photo “Out Of The Blue” taken in a freshwater sinkhole in Mexico, known as Chac Mool Cenote. Blake commented “underwater photographers can move freely in three dimensions, so I adjusted my position in the water to capture the symmetrical framing of the light beams by the rocks”.

Competition judge Martin Edge commented “I love the enclosure of the light within the Cenote, the composition contains all the sunlight so that the eye of the viewer cannot escape.”

The Underwater Photographer of the Year competition also aims to promote new photographic talent. Argentinian Horacio Martinez was named as Up & Coming Underwater Photographer of the Year 2017 for his image “Oceanic In The Sky” photographed in Egypt. “I noticed this oceanic whitetip shark patrolling in the distance and exposed for the sun beams, and was pleased by the dreamlike effect. Oceanics are great subjects for close ups as they are anything but shy. Yet, I wanted to capture their apparent loneliness in the big blue.”

Chair of the judges, Peter Rowlands commented “The photographer has seen the light and realised its dramatic effect extremely well and used it to contrast the small shark in a lonely world. Very evocative indeed.”

The title of Most Promising British Underwater Photographer, 2017 goes to Nicholai Georgiou for his image “Orca Pod” taken in the depths of winter in northern Norway. “the days are short and the water is barely above freezing, but with orca around the cold is quickly forgotten. The light was beautiful as the sun skimmed the horizon, but the water was dark and foreboding. Then these orca swam by, nice and close. It was a moment, which will be hard to top.”

Chair of the judges, Peter Rowlands summed it up neatly by commenting “I’m jealous.”

A notable category winner is Melvin Redeker from the Netherlands who won British Waters wide angle with the first photo of orca (killer whales) taken in Shetland in the UK. Redeker explains “We studied the Mousa pod over a few weeks and decided the best opportunity would come if I hid on the seabed where the orcas were hunting seals. Staring in a wall of water, suddenly the pod appeared. Totally silent. Eye to eye with these mighty apex predators, my heart skipped a few beats.”

Chair of the judges, Peter Rowlands commended “this is a groundbreaking shot for British waters.”

You can view the rest of the winners on the Underwater Photographer of the Year website.