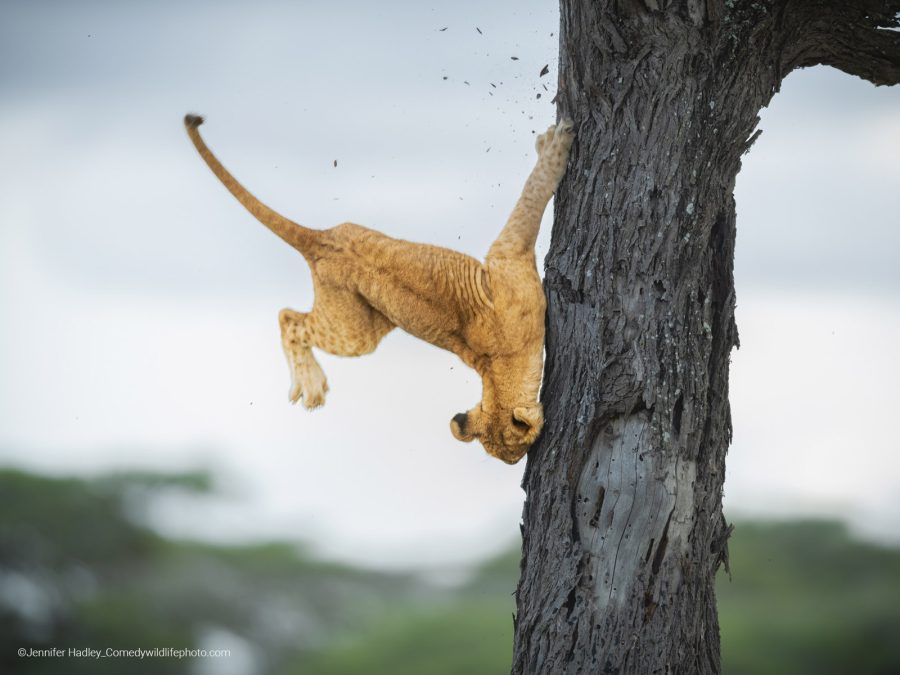 The funniest photography competition in the world – The Comedy Wildlife Photography Awards – has reached its conclusion and is ready to announce the 2022 overall winner.

Jennifer Hadley’s photograph of a lion cub losing its grip on a tree trunk, entitled ‘Not so cat-like reflexes‘, was awarded as Overall Winner, and also won the Creatures of the Land category.

Up against 5,000 incredible entries from over 85 countries around the world, Jennifer’s image fought off fierce competition in the closest voting ever!

The image was captured in Serengeti, Tanzania, where Jennifer managed to capture the moment that a 3-month-old cub tried to descend from a tree… although it didn’t go as planned for the lion cub.

“I think part of what makes this contest great is that most of these photos probably happen by complete accident and that was certainly the case with the lion cub falling out of the tree,” explained Jennifer.

“It was very late in the afternoon and so I had my aperture as open as possible to capture the most light possible with my shutter down lower than I would have liked but I figured with the cub walking around in the tree, I didn’t really need the speed.

“It didn’t even occur to me that he would make a go of getting down by himself in the most un-cat-like fashion. I mean, how often do cats fall out of trees?

“The gasp that emanated from our vehicle was palatable. No one expected this to happen and, of course, we were concerned for his safety but happily, as cats do, he righted himself just in time and landed on all fours and ran off with his siblings.

“A happy ending for a hapless kitty who didn’t quite know how to get down from a tree.”

This year, the winner of the Think Tank Photo Junior Category, went to Arshdeep Singh, who entered a fabulous shot of a winking owl resting in a pipe.

The Comedy Wildlife Photography Awards is a global, online and free-to-enter photography competition, showcasing hilarious images of the earth’s most amazing wildlife.

In addition to providing some light-hearted relief and joy, the competition aims to highlight the extremely important message of wildlife conservation in an engaging and positive way.

The competition champions the work of charity partner Whitley Fund for Nature (WFN), donating 10% of net revenue to them.

WFN is a UK charity that supports conservation leaders working in their home countries across the Global South. Over 29 years it has channelled £20 million to more than 200 conservationists in 80 countries.

The Affinity Photo 2 People’s Choice Award, voted for by the public, also went to Jennifer Hadley, for her charming shot of two stroppy penguins entitled ‘Talk to the Fin!’

The Comedy Wildlife Photography Awards was founded in 2015 by Paul Joynson-Hicks and Tom Sullam, both professional photographers and passionate conservationists.

It is a global, online and free-to-enter photography competition, showcasing hilarious images of the earth’s most amazing wildlife.

The Alex Walker’s Serian Creatures of the Land Award

The Spectrum Creatures in the Air Award

Creatures Under the Water Award

In addition to the 5 Category Winners, there were 10 entries that were recognised as Highly Commended Winners.