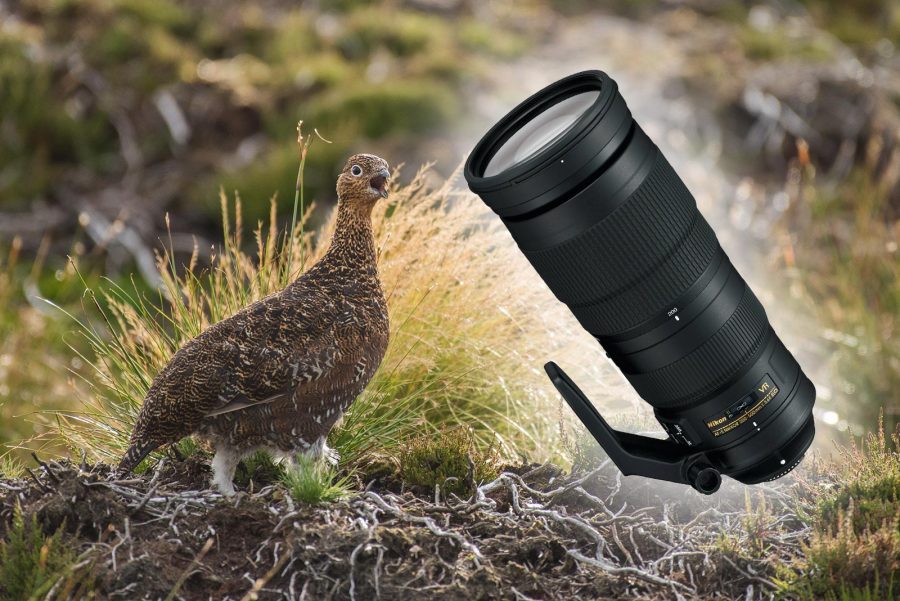 For a long time it has been the case that telephoto lenses from the likes of Canon and Nikon have been very expensive. £5,000 would be a good guess for how much you’d be spending if you wanted to score something with a range of 400mm or more. For this reason, many of us would head over to third-party manufacturers like Sigma and Tamron to buy lenses like the Sigma 150-600mm and Tamron 150-600mm.

But now things are changing, and Nikon brought out the 200-500mm f/5.6 lens. This is their response to the cry for a ‘budget’ telephoto lens, in an effort to eliminate the need for users to head to other brands for their longer lenses. It retails at the same price of the Sigma lens: just under £1,200. That’s pretty impressive for a telephoto lens, and especially one that doesn’t have a variable aperture. We’ve been knocking on Nikon’s door asking to review this beast for a while, and eventually managed to get our hands on one.

I was particularly keen to test this lens because my main weapon of choice is the Nikkor 200-400mm f/4 lens. It’s a professional level telephoto, and it was a little surprising to see Nikon offer a much cheaper lens covering this range and more.

One thing about telephoto lenses that really bugs me is how heavy they are. They’re a burden, especially if you’re travelling long distances with your equipment on your back. If you’d dare try handholding a super telephoto lens, then camera shake is going to be a real danger in your photos. As soon as I picked this lens up out of the box, I noticed how lightweight it is. At just 2.3kg, the Nikon 200-500mm is a whole kilogram lighter than the Nikon 200-400mm f/4 VR II lens. Wow – big thumbs up from me. 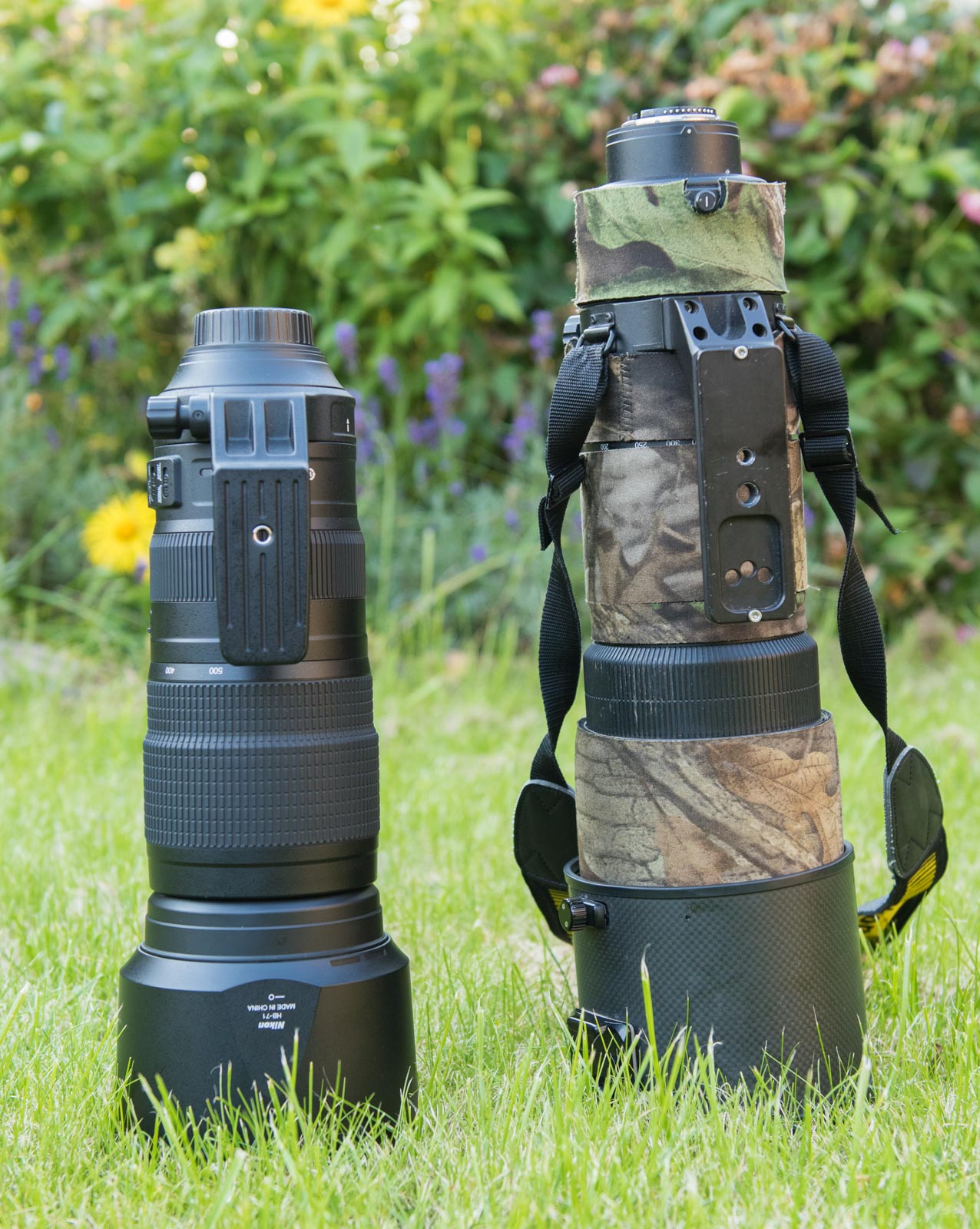 But what about the size? Unsurprisingly, the movement in this lens is external. That means that when you zoom in, the lens extends and becomes longer. That’s a real shame, but common place in a budget telephoto lens and part of the reason you aren’t going to be paying over £5,000 for it. Even so, at full 500mm extension, this lens is a fraction shorter than the 200-400mm. When it’s hunkered down to 200mm, the lens is really compact. It’s the perfect lens for a travelling wildlife photographer.

There is a handy locking mechanism to keep the lens at 200mm – this will stop it extending when you don’t want it to. I would’ve liked to see a locking mechanism that worked at any focal length however, as the lens barrel will move with gravity. If you’re shooting upwards at 500mm, expect the lens to wind itself in unless you are holding it on the zoom ring. Now admittedly when you are photographing you are going to be holding the zoom ring, but it can be irritating at times.

It’s an FX-format lens, so it’ll work perfectly on full frame cameras. Crop sensor cameras (DX) will see an increase in the reach of this lens. More information on how FX and DX cameras work is available in this tutorial.

A small detail, but one that I appreciated is that the lens hood has a twist-to-lock mechanism. It’s much quicker and easier to attach than the screw-on hood of the 200-400mm.

Thanks to the 200-500mm lens being so lightweight, it is perfectly suited for handholding. If you find yourself constantly on the move chasing down wildlife to photograph, then this is going to be a big plus for you. The vibration reduction built into the lens lets you battle camera shake effectively, with a possible shutter speed 4.5 stops slower than when the VR is not engaged. I’m used to the loud whirring noise of the VR on my 200-400mm lens, so when I heard (or didn’t hear) the 200-500mm’s VR at work I thought it was broken! The VR is so quiet that you barely notice it is kicking into action. This is great if you are a film-maker, as you won’t pick up the noise of the stabilisation in your recording.

The VR system sees the introduction of a ‘sport’ mode. There is a switch allowing for either Sport or Normal modes. The former supposedly gives a more stable viewfinder and should be used to photographing subjects that move erratically, such as birds in flight.

The main question you probably have is about the lens’ sharpness. Well, I am pleased to report that this lens is incredibly sharp. In fact, I found it almost as sharp as the 200-400mm lens. At times, I couldn’t even see much of a difference. The following comparison should give you an idea of the marginal difference in sharpness for the two lenses. Both photos were taken at 400mm, with a shutter speed of 1/400, f/5.6 aperture and ISO 400. Click here to load a higher resolution copy of the comparison.

I was also pleased to see that the minimum focusing distance is 2.2 metres (just 20cm more than the 200-400mm). I was expecting this to be somewhere closer to 3 metres, so that was a nice surprise.

One issue that quickly became apparent, however, was the focus speed of the lens. In bright light, this lens is pretty rapid and silent in its focus – totally capable of photographing birds in flight. However, as soon as the light began to drop in the evening (and actually it didn’t feel that dark) the focus slowed up a lot. I was surprised, and swapped to my 200-400mm to see how that performed – its focus was still rapid as normal. Sure, this is a budget telephoto lens so this is to be expected; but it’s still a little disappointing to see. Especially when a lot of wildlife photography is undertaken at dawn and dusk. If you’re feeling slightly discouraged about this lens now, I’d say that this is something you can learn to deal with. Personally, I spent a few years of my career shooting with one of the earlier Sigma budget lenses; they were even slower to focus in low light (if at all). It was frustrating at times for sure, but when you’re buying a budget lens this is something you can adapt to.

But shoot in good light and you have nothing to worry about. I took the Nikon 200-500mm up onto the moorlands in the hope of finding some red grouse to test the lens with. It locked straight onto them, and I was stunned by the detail this budget telephoto was capable of capturing.

We’ve already touched on it earlier, but just look at the clarity of this lens. I feel like I need to ask Nikon if they accidentally sent me a high-end telephoto instead of the actual 200-500mm. None of these sample photos have had sharpening applied in post production.

Now whilst the rabbit was shot at 500mm, and still appears pretty sharp, I did notice some softness at the long end of this lens at other times. It tended to occur when things were further away, whereas the rabbit was relatively close to the camera and large in the frame. Take a look at this photo of the cow, for example. It’s not filling the frame at all, but the closer crop shows a lack of detail in the face.

It’s fairly normal for softness to creep in for far away subjects, but it was a little more apparent with this lens than I would’ve hoped. On the 200mm end, it’s tack sharp. Just look at this photo of a rare UK big cat. 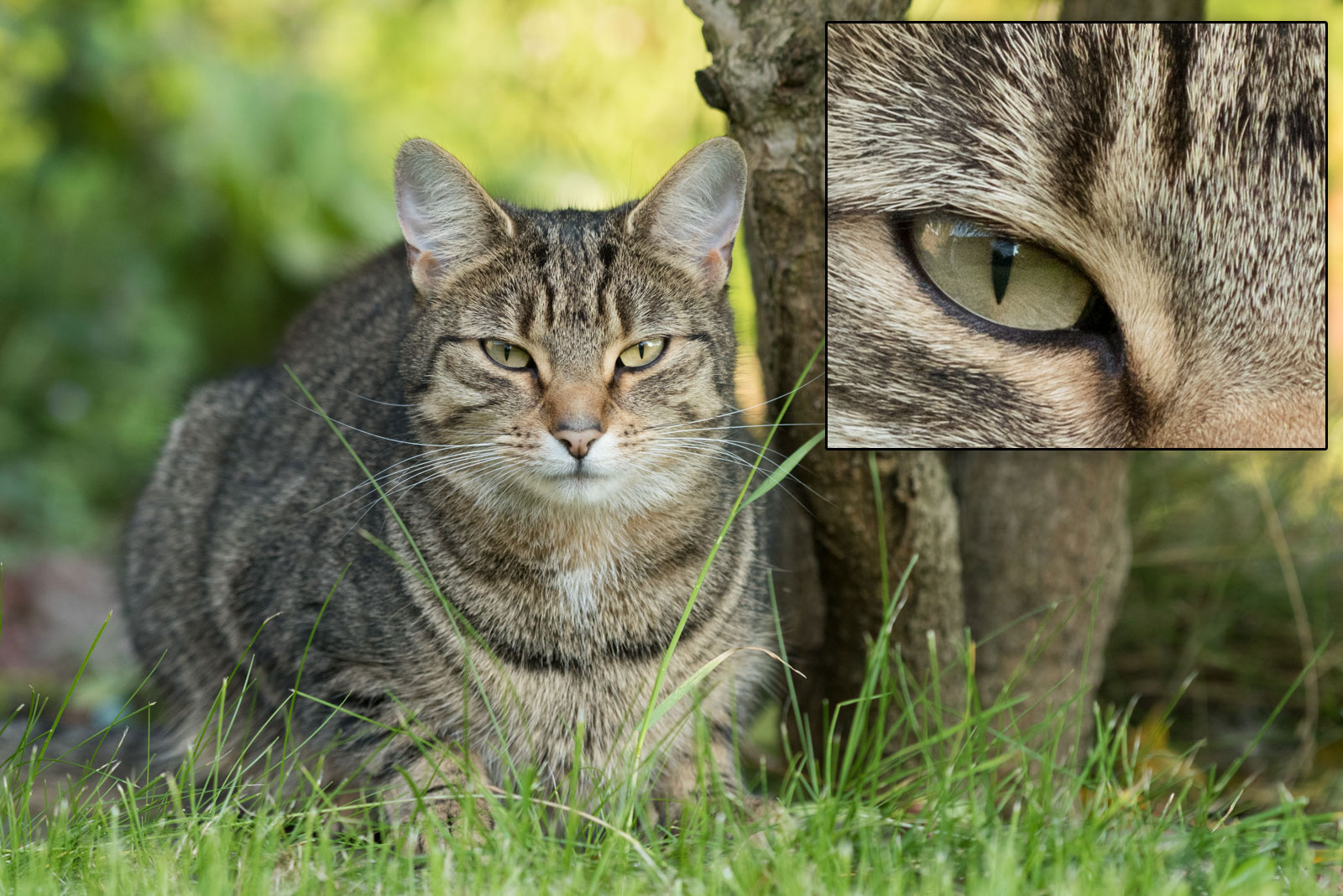 Finally, on the topic of sharpness, I had read that the lens goes soft at infinity focus. I tested this out briefly, and I didn’t find this to be the case. Perhaps other reviews had a dodgy sample, but this is what I found. It’s not pin sharp, but it is far from totally soft – you can still pick out detail in the branches.

One of the most surprising things about this lens was the fact that it has a constant aperture throughout. Just like the 200-400mm, which has a constant aperture of f/4, this lens won’t vary its maximum aperture depending on your chosen zoom. I have yet to see a budget telephoto lens other than this one that offers this, as the rest will vary between f/5 and f/6.3 across the range. This is a real bonus for wildlife photographers as you often need all the light you can get. Nothing is more frustrating than having to zoom out just because your maximum aperture has shrunk.

It’s the answer to your budget telephoto needs. Honestly, I really think I may buy one myself. It just makes so much sense as it’s pretty sharp, lightweight and perfect for travelling.

Sure there are some compromises, but then if that’s a problem you need to be spending over £5,000 on your lens. The main issue is the slow focusing speeds in lower lights, but adapting your technique to suit will let you overcome this as best you can. You may miss a few shots because of it, but such is life and that can happen anyway for a number of reasons.

Overall, the Nikon 200-500mm f/5.6E ED VR lens is a great contender for the budget telephoto market. I’m pretty sure Sigma and Tamron will be looking over their shoulders now this lens is on the scene. I’d give this lens 4 out of 5 stars.

Looking to get your hands on this lens? You can buy it from any of the following trusted retailers. Please consider making your purchase via one of the below links, as we earn a small commission on the sale and it helps to keep our servers online.