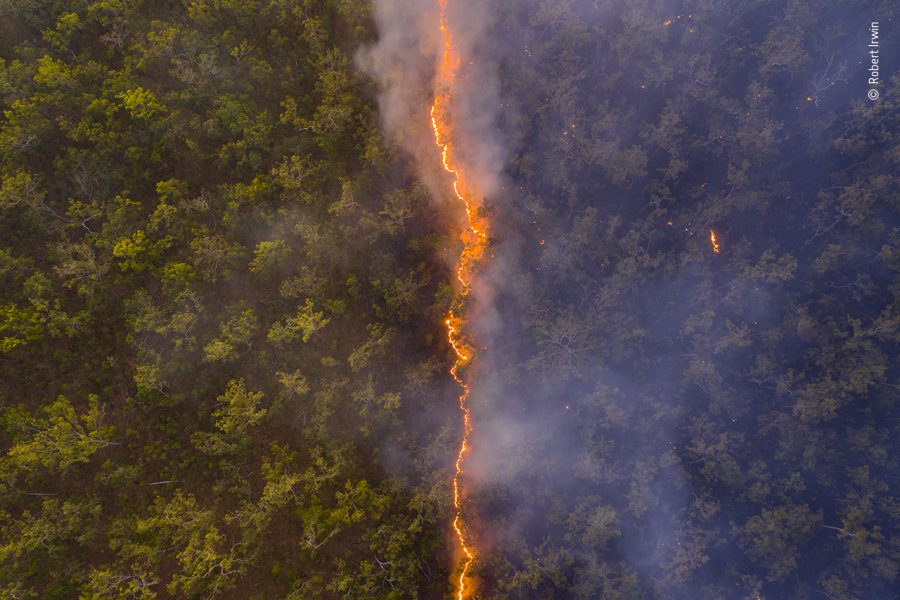 Robert Irwin, the son of television conservationist Steve Irwin, has won the People’s Choice Award in the prestigious Wildlife Photographer of the Year.

Captured using a drone, Irwin’s dramatic image of the devastation caused by a bushfire in Northern Australia was the favourite image according to the public. 55,486 votes were cast to determine who would win the special award this year.

Having spotted smoke “billowing out of the horizon,” Irwin launched his drone and sent it over to the location of the fire.

The dramatic scenes were amplified by the fact Irwin had only a few minutes of flight time left before his drone’s battery ran out.

Taking the drone right into the smoke, he framed a strong composition showing the 50:50 split through the forest. On the left, a pristine natural conservation area is contrasted against the blackened, devastated remains of the rest of the forest.

“I am incredibly excited to win the [award],” said Irwin. “For me, nature photography is about telling a story to make a difference for the environment and our planet.

“I feel it is particularly special for this image to be awarded, not only as a profound personal honour but also as a reminder of our effect on the natural world and our responsibility to care for it.”

Irwin’s image was put to the vote alongside four other images. All five photos will be displayed in the Wildlife Photographer of the Year exhibition at the Natural History Museum in London, UK, when the building reopens. The exhibition will be open until 1st August 2021.

Take a look at the other images in the running for the People’s Choice Award.

The Wildlife Photographer of the Year competition is developed and produced by the Natural History Museum, London. For more information, see the competition’s website.