Photographing the Brown Bears of Finland 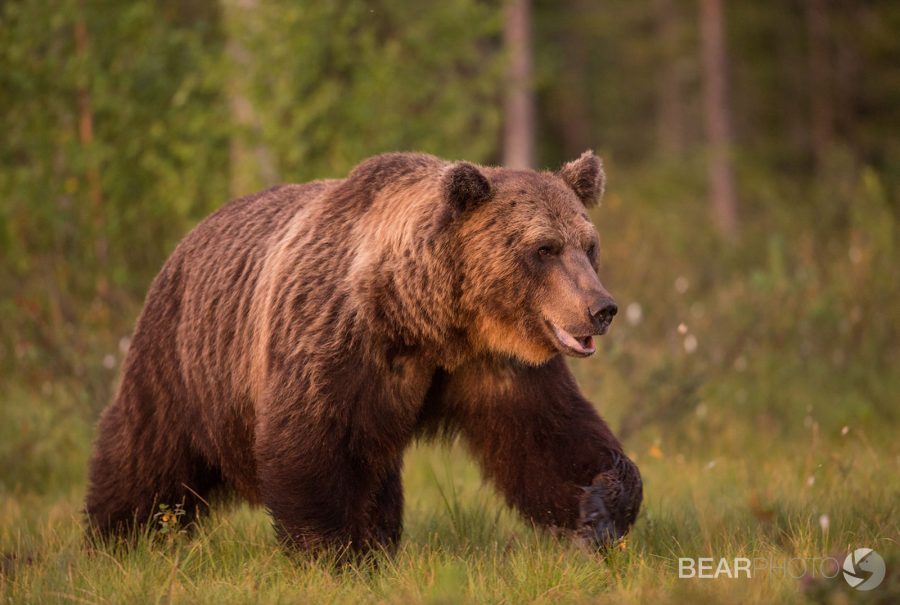 Kyle Moore and Harry Read both share a passion for Nordic wildlife, spending a lot of time photographing brown bears in Finland together. The majestic, and somewhat elusive, predator stalks through the ancient Taiga forests that cover most of Finland, providing a paradise for wildlife photographers.

The pair have come together to create BearPhoto, a tour company dedicated to providing unforgettable experiences with brown bears for keen, and patient, photographers. We sat down with Kyle and Harry to hear about their favourite experiences photographing Europe’s largest predator.

Kyle’s first experience with photography was after receiving his first ever digital camera on his 12th Birthday in 2010. Almost instantly, the interest grew into something of an obsession, and before long he was totally hooked.

Harry first picked up a camera aged 13 to document the impressive diversity of birds in his home county of Suffolk, UK. Through spending many hours out in the field, a focus on wildlife photography soon became the priority.

Have you always loved wildlife?

Harry was first introduced to birds and invertebrates from a very young age, and he quickly developed a passion for all things wild. Growing up on rural farmland, Harry closely followed the charismatic bird species such as kingfishers and barn owls on his doorstep, developing an obsession for the natural world and is now a Zoology graduate. Kyle also developed an interest in wildlife at a similar age, however, it was the frequent visits to his local nature reserve, Carlton Marshes (Suffolk), that sparked his interest in nature.

Tell me how the idea of BearPhoto came about?

At the start of Kyle’s photographic career, he undertook a commission in the Finnish wilderness to document one of the most elusive species of bear: the European brown bear. Unlike their North American cousins, the grizzly bear, this subspecies is extremely secretive, and so it was through the countless hours of observing these amazing creatures that Kyle fell in love with them.

Having returned that same season during mid-summer, with good friend and fellow photographer Harry Read, the pair were keen to once again be immersed in ‘bear country’ in totally different conditions. The encounters they experienced each night during that summer with both bears and wolverine, in such an untouched wild setting, gave the pair an overwhelming impulse to somehow share this amazing experience with other photographers. This was when the seed of thought was planted, leading to the creation of BearPhoto in late 2017.

How did you choose the country/location to maximise the chances of seeing bears?

As brown bears are distributed throughout most of Northern Europe, and as far south as Greece and Spain, we wanted to travel to a location with a healthy, stable population allowing reliable views. As mentioned in the previously, Kyle’s ‘lucky break’ came in spring 2015, when a Finnish naturalist commissioned Kyle to travel to a location in Eastern Finland where the country borders Russia. The location remains one of Finland’s most untouched areas and is a protected reserve, situated just a few hundred meters from ‘no man’s land’, an area between the Finnish-Russian border where bears use the ‘wild corridor’ to travel freely. This healthy, untouched habitat of the Kuusamo region of Finland was the perfect location to observe these enigmatic mammals moving naturally through the endless expanses of taiga forest.

Tell me about the kit you both use for bear photography.

Harry uses a Canon 5D Mark III, with a 300mm f2.8 lens. The impressive noise performance of this full frame camera body means the ISO can be pushed up to 1600-3200, and images retain significant quality with little noise. Bears vary in the distances at which they approach photographers. With the 300mm f2.8 lens, a wider field of view allows for images showing the surrounding untouched habitat, as well as achieving close up portraits when bears venture closer. In summer, Finland’s long days (short hours of darkness) mean light is plentifully available. However, bear activity reaches its peak just before and after midnight when the large aperture of the 300mm lens is ideal for low light situations.

Kyle also uses Canon equipment, favouring the EOS 1DX, however, prefers to take a different approach when it comes to long telephoto lenses often associated with photographing wildlife and instead favours the use of wide-angle lenses. Through this approach, he aims to capture close and intimate portraits whilst retaining the bears among their wild surroundings. This is a challenging technique, and specialist equipment is often required, such as remote camera trap triggers etc.

Can you explain the shooting setup – Is there a lot of sitting quietly?

So far during this project, we have collectively spent a total of 2000+ hours in dedicated bear observation hides (amounting to 83 full 24 hour days). Patience is of absolute key importance during observation, and sitting in silence for extended periods of time is vital. Small wooden observation hides are 6 feet tall and 3 metres long, with just enough space for a cramped bunk bed and two small chairs. During summer and autumn, the hide session begins at 5pm and lasts throughout the night until 7am the following morning (14 hours).

Do you use a certain method to attract the bears?

This protected reserve, owned by a Finnish eco-tourism company provides a safe haven for passing bears. Bears are fed at this site using locally sourced meat, which is very strictly limited to around one small ‘chunk’ of meat in approximately 30 locations over a large site (250 acres). The restricted supply of food means sightings aren’t always guaranteed at this location, and bear movements are sporadic.

The composition of the bear’s diet isn’t compromised by unhealthy amounts of a single food source. On many occasions, we have observed this omnivorous species plucking berries from blueberry bushes and even removing tree bark in search of invertebrates, this kind of natural behaviour is usually very difficult to observe elsewhere.

Is there a lot of post-processing to your work?

Both myself and Harry adopt a similar approach to post-processing. We believe that achieving the correct settings in camera is of utmost importance to retain maximum image quality. Our basic workflow is usually carried out in Photoshop Camera Raw and includes minimal tweaks to Exposure, Contrast, Highlights/Shadows and finally colour adjustments if required.

Were there any ‘hairy’ situations where the Bears got a little too close?

Bears have exceptionally large home ranges, and can, therefore, pass through an area at any given time. On many occasions, whilst walking to the hides to set-up for the night, we entered the swamp area where a cacophony of gull alarm calls would alert us to a bear’s presence. On another occasion, we were walking through the forest to maintain camera-traps when suddenly a huge adult male bear emerged from the forest depths perpendicular to us both, only 25 metres away, and walking straight towards where we were positioned. This is an exceptionally unusual encounter though, and after finally catching our scent, the bear peacefully turned back. Unlike their North American relatives, European brown bears are extremely secretive, so this happens very rarely.

Do you have a favourite photo that you’ve taken?

Harry’s favourite photo was taken at the end of summer. A long night’s wait between 5-11pm with not a single bear was suddenly transformed. A drop in the temperature of the swamp prompted a thick layer of mist to form rapidly over the lake. In complete silence across the water, the distant splashes of a bear walking across the marsh echoed around the clearing. A large male bear sauntered past the edge of the lake, almost floating through the mist like a ghost, pausing for a brief moment in the cool hues of the blue hour.

Kyle’s favourite image was captured earlier this year (April 2017) and shows a large male Bear getting down low to investigate his remote-camera-trap under the night sky. The image was one of Kyle’s most difficultly achieved images to date throughout this project, taking 30 consecutive nights in temperatures low as -19°. Each morning Kyle would review the images from the night only to find the front element of the lens had frozen overnight, and on one occasion the camera was completely buried by the persistent driving snow! This resulted in many deleted images which may have otherwise worked very well.

To find out more about BearPhoto and the tours they offer, head over to their website.