Tips to Photograph Wildlife on a Night Safari in Africa 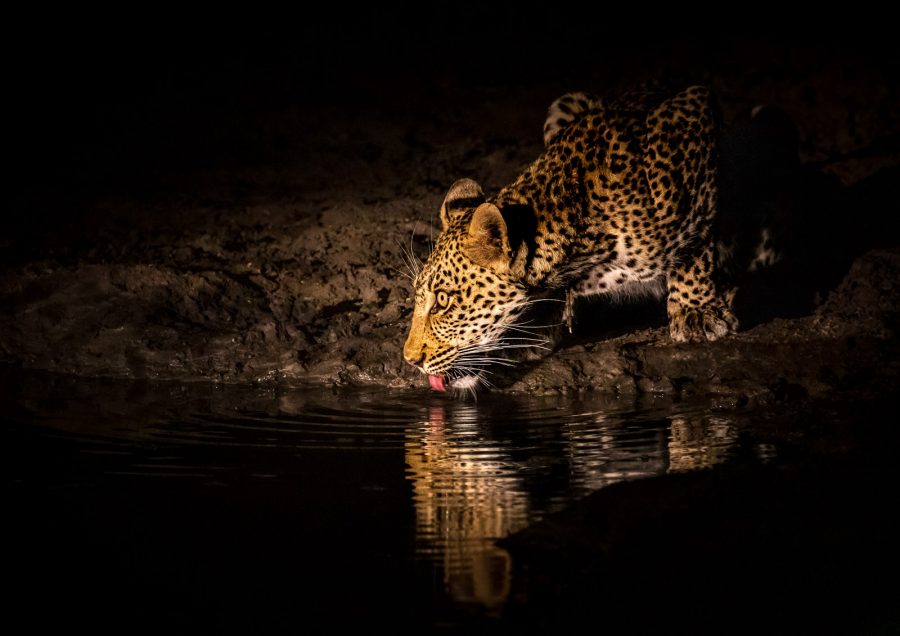 When on safari in Africa, the wonders of nocturnal species often fall by the wayside for most people. The grand and iconic species such as lions and elephants are always on the top of people’s wish lists, whilst lesser known species such as genets, civets, and aardvarks rarely creep into people’s thoughts when planning their African photographic safaris. I believe a lot of this, from a photographer’s standpoint, is due to the requirement of photographing at night – which can result in images that are full of noise and poorly lit.

First and foremost, it’s important to know that once you head out into the African bush at night, you’re entering a completely different world. Predators are more active, different noises can be heard and, depending on the moon, visibility can be next to non-existent. A Land Cruiser’s headlights and a sweeping spotlight are all you have to spot the ever-bustling life that’s now cloaked in darkness. This shouldn’t be scary… but it should be exhilarating. 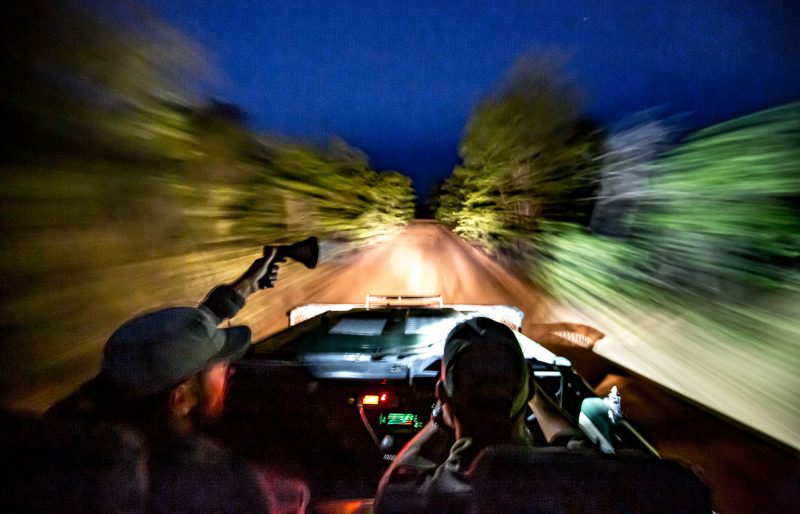 Animals are found, for the most part, by the light being reflected by their eyes, and there’s nothing more adrenalin pumping than turning a corner and seeing bright eyes beaming back at you. After that heartbeat of excitement comes curiosity, and of course all fingers become crossed for the likes of a leopard. Night drives are an experience, and one that I feel everyone should have when visiting Africa, and a successful one will have you addicted to traversing the African landscapes at night.

Now, although photographing at night is possible, it must be stated that it is difficult. Obviously the spotlight, which more often than not a guide will be wielding, is nothing compared to the sun and we have to be familiar with the Inverse-Square Law of Light. You can read more about it here, but the basics are:

This might seem fairly obvious to some, but it’s easy to forget and take for granted when we’re used to photographing in good lighting conditions. Now, with the sun long since set, this law is all the more important. 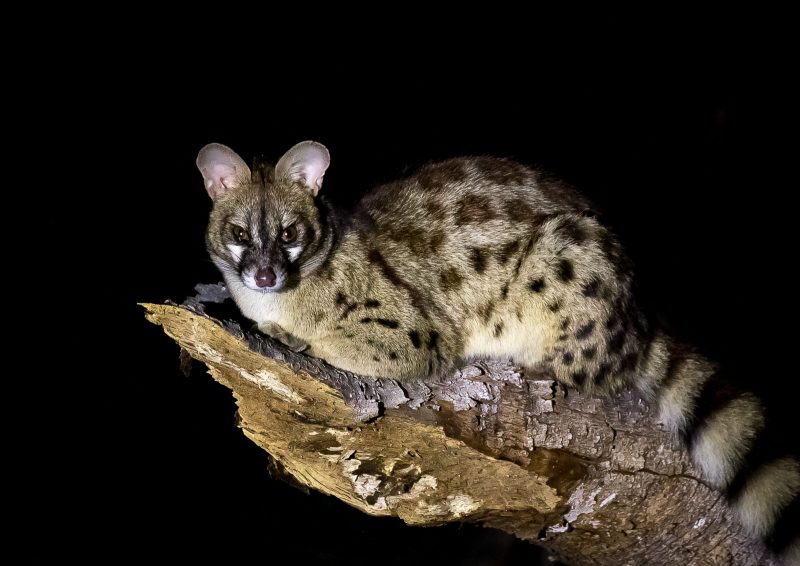 What this fundamentally means is that you’re going to have be super aware of your exposure triangle settings: shutter speed, aperture and ISO.

The best thing to do is to keep to a standard default setting, so then no matter what happens you can pick up and shoot and know you’ll have the best chance to at least document what you saw. From then, you can make some adjustments if you have the time. What I personally recommend, and why, are as follows.

Aim for 1/80th – 1/150th sec. This somewhat slow shutter speed will let in a decent amount of light, whilst still being fast enough to fight against camera shake. However, it’s best to use any form of stabilisation, such a tripod, monopod or even leaning against the side of your vehicle, especially when using a telephoto lens.

The slower you make it, the more you increase the chances of motion blur, but the faster you make it the less light and subsequently the darker the image will be.

Go as low as you can go! A wide open aperture (f2.8, f4 etc) will allow a lot of light in, Make sure to focus directly on the eyes of your subject, especially when using something as low as an f2.8, as that narrow depth of field can often cause a segmenting effect, where parts of the animal are in focus and the rest is thrown out of focus.

Just remember that a high ISO will always be part of night photography. Aim for 3200, but be prepared to go as high as 6400 if need be. What is best suggested is to do an ISO test beforehand to see what this looks like on your camera, as this may not result in useable images with older cameras.

I often get asked about white balance, but in my experience leaving it on automatic is best. Most spotlights are white now, so don’t inject awkward colour tones to the scene, and it’s easy to add a bit of warmth of coolness in post processing.

Quite simply, you don’t have the time to start making these adjustments out in the field, so leave it on auto, get the shot and then make the changes afterward when time isn’t such an issue.

Remember, if you are shooting in raw file format you can adjust your white balance in post without any negative effects on the image.

Behaviour and proximity to wildlife

You have to keep in mind that every sighting is going to be different. Sometimes the animals will be next to the vehicle; other times they’ll be far away. They might be still one moment, and then running the next – and this is when adjusting your settings is purely dependant on the proximity and the behaviour of the animal.

The ideal situation is to have an animal close to the vehicle (say a couple of meters) that’s relaxed and not moving. This means we’re getting a maximum amount of light coming back to us and that our slow-ish shutter speeds are enough to capture the scene.

These ideal moments can bring you some incredible results, and it’s what we’re always after when heading out into the night. 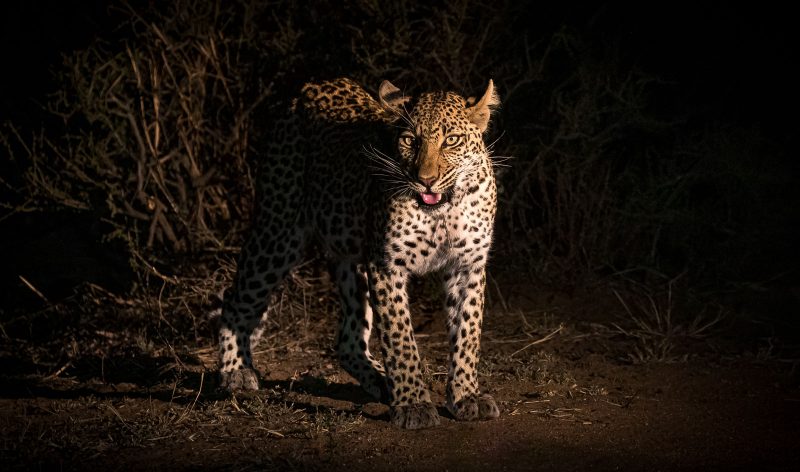 In other instances, the animal might be moving and so you’ll have to pan with their movement whilst shooting to try to freeze the animal in your shot. However, in the worst case scenarios, they’ll be far away and moving in between trees and just focusing alone is proving to be a problem.

What do we do then? Well, this is the time when you put your camera down. There’s an inherent frustration that builds up in photographers with sightings like this as you want nothing more than to photograph this rare and awesome moment, but you simply can’t. It’s better to simply prioritise the experience over the photograph.

Put the camera down. Enjoy the sighting. Don’t allow photography to take anything away from your time in Africa.

Being ethically minded is the most part of being a wildlife photographer. We’re often thrown into intimate situations where we could directly alter or interfere with the behaviour of animas, and we must always make sure we’re doing our utmost to make sure we’re not.

In an ideal world, we would be able to photograph them without them ever knowing we were there, but the noisy, diesel-fuelled vehicles and clicking of cameras makes this difficult.

For the most part, animals are tolerant of our presence, but it’s all too easy to push it too far. As such, no matter how much we want a certain photo or for that leopard to look straight at us, we cannot do anything to disturb them this much. If they keep their back turned to you, then that’s it – making noises for it to turn is not responsible or ethical in the slightest and quite often causes a negative snowball effect for the animals’ behaviour (or our own).

Rules are in place for a reason and your guide should communicate these at the start of the drive. 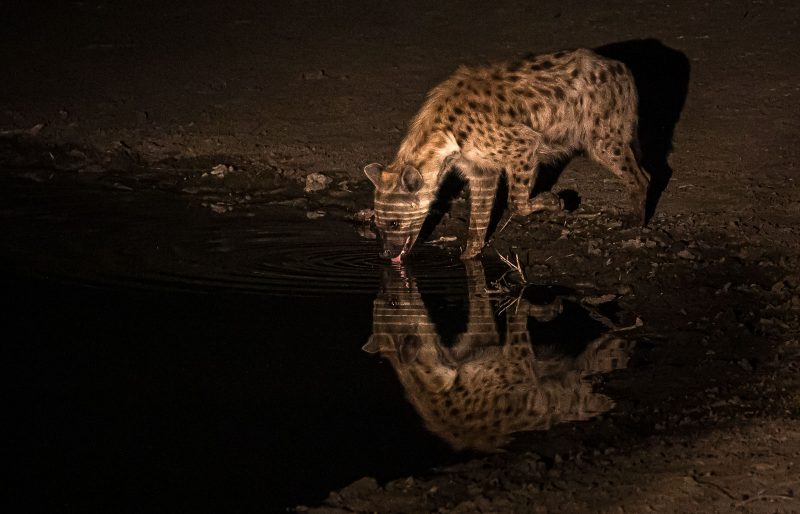 Most animals cannot be photographed at night. General game, elephants, rhinos etc will always be ignored as their eyesight is far too sensitive to our spotlights at night and too much exposure can cause night blindness – which can obviously put an animal such as an antelope at a huge disadvantage. If it gets spooked, it can easily get separated from its herd, take a wrong step and hurt itself, and thus leave itself open for being predated upon.

What you’re after is the animals that are accustomed to low light. Take leopards, lions, and hyenas as an example. These predators are all more active at night and are can tolerate our spotlights, but we still make an effort not to shine on their faces so as to cause as minimal annoyance as possible.

I’ve been at plenty of sightings where these animals couldn’t care less about the light being shone on them, but this is purely because they’ve been treated with respect – it only takes one bad experience to shake them and consequently cause them to flee from vehicles in the future. 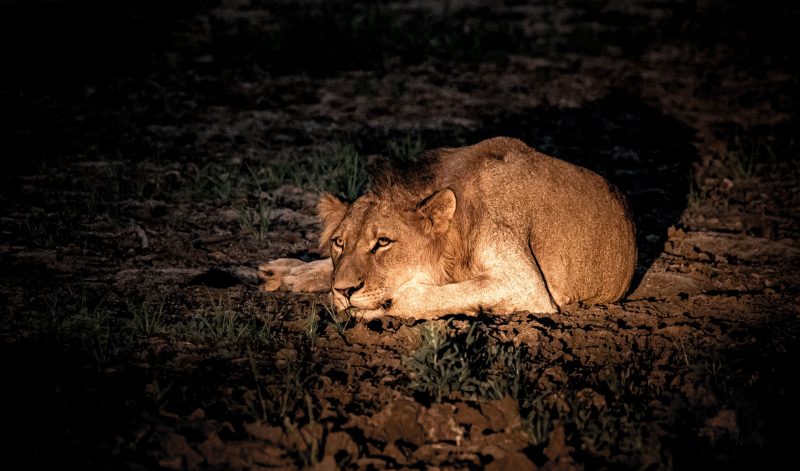 Spotlighting is left to the professionals, who can identify what animal is what by the reflected light from their eyes, who know how to appropriately light an animal, and how to read their behaviour.

As such, flash photography is frowned upon. Some lodges and businesses allow it, but I’ve had nothing but negative experiences with it in the past when I’ve witnessed photographers using it. Instead of one constant light source, an animal is now being bombarded with multiple strong bursts of light over and over again.

This more often than not results in the animal getting stressed and either running away or getting aggressive with the vehicle. Either of which is bad news, but the latter is obviously extremely dangerous.

Instead, I believe in making do with the spotlight, as it will always give you better and more atmospheric results as it’s often being lit from a more diverse angle than with your flash. The wellbeing of the animal must always come first before our own photographic desires.

When an animal looks like it’s starting to get annoyed or stressed, the light goes off and you may even leave the sighting for that animal to get comfortable again.

Embrace the diversity of the night

It’s important to note that not all predators can be spotlighted at night. Cheetahs and painted wolves (African wild dogs) are purely diurnal and as such are too sensitive for our spotlight.

However, there are plenty of beautiful and amazing subjects to photograph from such as civets, genets, porcupines, aardvarks, white-tailed mongoose, honey badgers, bush-babies, and many more. 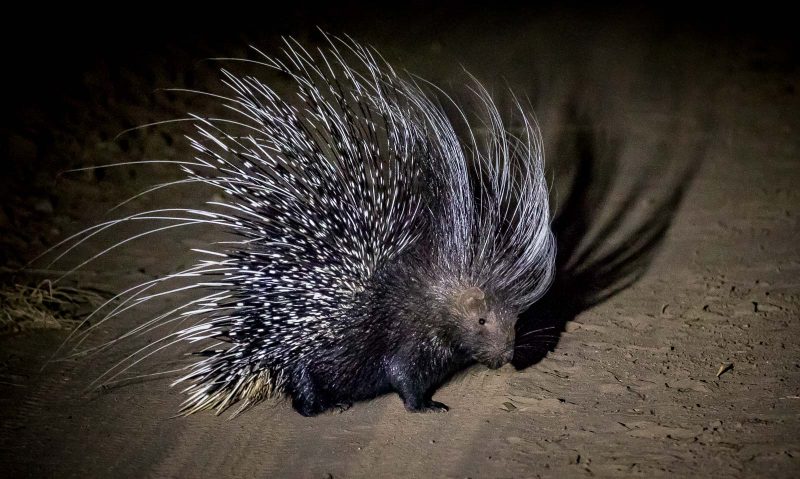 Each and every one of these is overlooked in large by the photography and tourism industries, and only by shining more of a spotlight on them can we generate more interest in them.

As wildlife photographers we are, in essence, ambassadors for the species we photograph and share with the world, so we should take that in our stride and make sure our own creativity and photographic artistry can be used to benefit and bring awareness to the animals that have gone somewhat ignored for far too long. 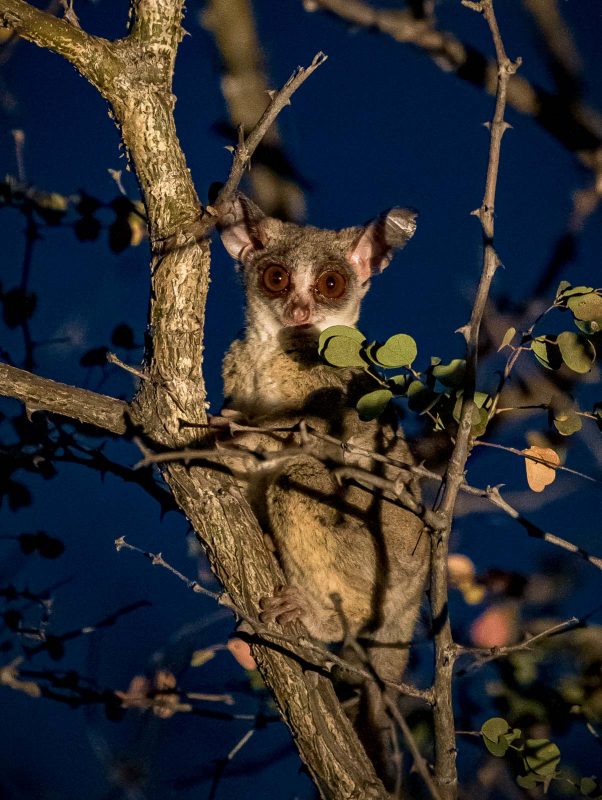 I want to conclude with a brief list of things that I believe are the fundamental takeaways of photographing wildlife at night.

Night drives are, for me, the most exciting and addictive form of game drive, and when you get those spectacular sightings that result in great photographs, the satisfaction can’t be rivalled.

I hope you’ve found these tips for night photography safaris useful. When you next decide to venture out in Africa’s darkness, you’ll surely agree that it truly is a beautiful and unique place!