When it comes to camera bags it’s fair to say that I’ve owned a good many over the years and I currently have four or five, all of which have a specific purpose. At least that’s what I tell my partner when she attempts to hurdle them to cross from one side of my office to the other. I was therefore eager to try out the Rotation 180º Photo Backpack from the American company MindShift Gear on a recent excursion to Airiundle NNR. This is a bag of two halves that has been designed to hold photographic equipment in the lower section while the top half is basically a regular rucksack with a single 17 litre compartment for carrying extra clothes, food and drink and other gear. (There is an optional padded camera gear insert that fits inside this upper section to carry more photo gear if required – not tested).

Overall the bag is quite heavy before you begin to load it up with gear. This is partly because the bag is manufactured from heavy duty materials that are clearly made to last. But also because the rotational waist pack fits inside the rucksack there is a lot of extra material when compared to a conventional camera bag. However, it is this cleverly designed feature that is the unique selling point of the Rotation 180º Photo Backpack by allowing you to access your camera gear without the need to take the rucksack off your back. 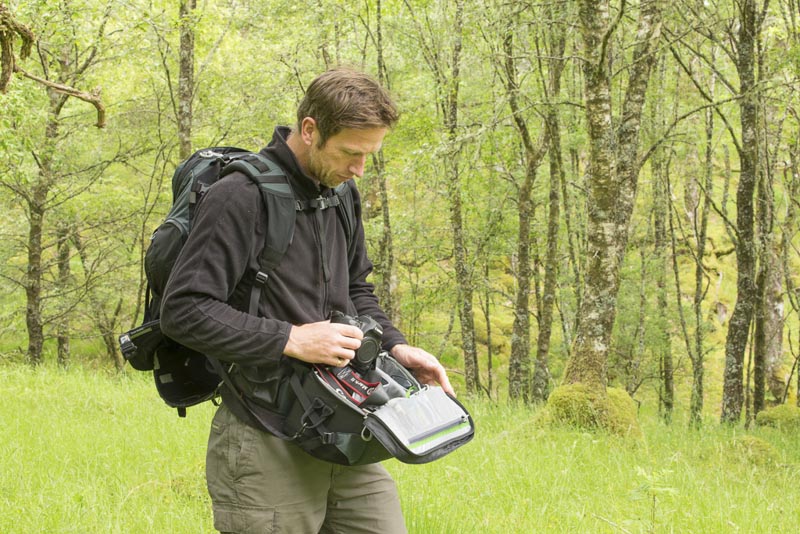 This was done by unclipping the catch that holds the waist belt in place and rotating it 180º so that it was positioned in front of me. This was easily done once I’d loosened the straps and the bag rotated without a hitch and was equally straightforward to rotate back into its original position. You can then unzip the lid, which is hinged away from you for easy access to your gear. This removes the need to take the bag on and off your shoulders and place it on the ground when you want to get at your camera gear. This would be very useful when working in a wet environment or on the beach for example when you wanted to make sure that your gear stayed dry and free of sand.

By keeping the bag on your back there is obviously no respite for your shoulders although the bag is somewhat lighter of course having removed some of the camera gear. The waist bag itself will hold a DSLR and three or four small to medium sized lenses although the depth is only 16cm which meant that I had to lay my 70-200mm f/4 lens horizontally as there wasn’t enough depth to slot it in vertically. A small camera body such as my Canon 5D Mk II fitted in end on, which freed up more space for lenses but the Canon 1DX had to go in with the hotshot facing upwards which left less space for lenses. 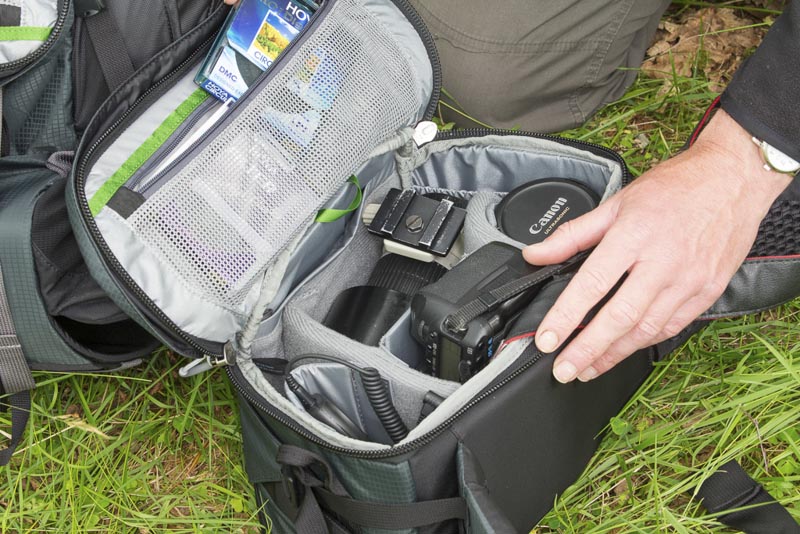 There is a zipped compartment in the lid of the bag which will hold a couple of filters such as a polariser and a small spare battery but there was nowhere that I could easily store my (150mm) LEE filters and these had to go into the main compartment. I found this a major drawback with the bag as it would be filters and other accessories that I would want to get at quickly without having to take the bag off. Having to store these kinds of items in the main compartment of the rucksack somewhat defeats the object as it means that you have to take the bag off to get at them.

The waist belt can also be worn on its own without the larger upper section of the backpack by simply removing it from its docking position. In this configuration it could be worn on the front or back of the body supported by the waist straps. These straps also provide very good support when carrying the entire backpack by taking most of the weight on your hips and they are very easy to adjust and tighten.

In addition to the main compartment, the rucksack also has several other zipped compartments for small items, various loops for carrying extra items as well as an elasticated drinks bottle compartment. It will also transport a tripod very effectively by slotting the bottom of the legs into a pouch and then strapping the tripod firmly against the body of the rucksack. I found this a comfortable way to carry the tripod and unlike other tripod carrying systems I’ve used, the tripod remained held tightly in place. Of course to access the tripod you would need to remove the rucksack from your back. Both the main rucksack and the separate camera bag have their own waterproof covers, stored in individual zipped pockets on the respective bags. 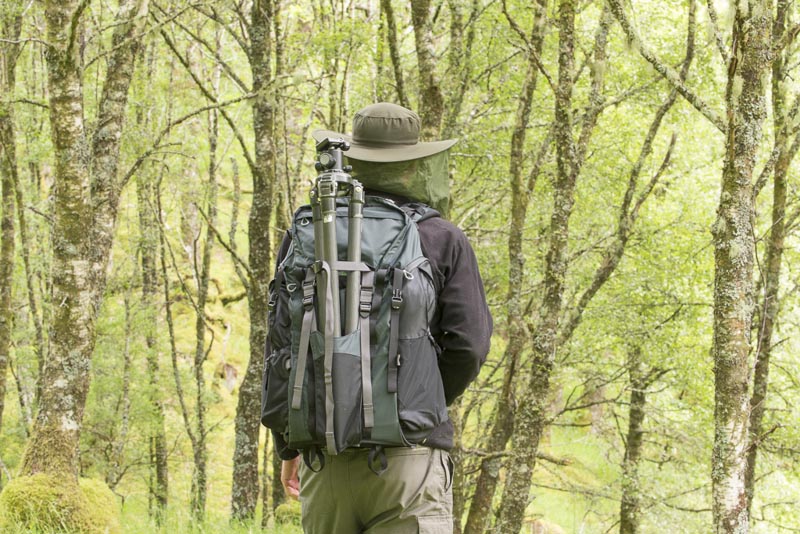 For my shoot I took my standard landscape kit consisting of a Canon 5D mark II and 16-35mm, 24-105mm and 70-200 f/4 lenses, which filled the camera bag. My LEE filters went in the main compartment along with a spare jacket, a drinks bottle and my lunch. The Gitzo carbon fibre tripod attached down the spine of the bag. All told this felt quite heavy and heavier than my usual camera bag for this kit although the weight was well distributed. The dividers in the waist belt can easily be re-configured to suit your gear and it’s also possible to fit in a camera body with a lens attached.

The bag was comfortable to wear with the waist straps taking most of the weight on my hips meaning there was less strain on my shoulders. In this respect the Rotation 180º was more akin to a backpackers rucksack and certainly for longer hikes this would be a real plus point. The shoulder straps were equally well constructed, nicely padded and comfortable. Overall, I was impressed by the build quality of the bag and the design certainly has merits for use in certain situations, primarily when you don’t want to or can’t put the bag down on the ground. It would also be a very useful combined bag for photo shoots that involved a lot of hiking as not only is the bag comfortable to wear but the large main compartment and additional pockets and straps mean that you could carry a fair bit of essential non photographic gear. 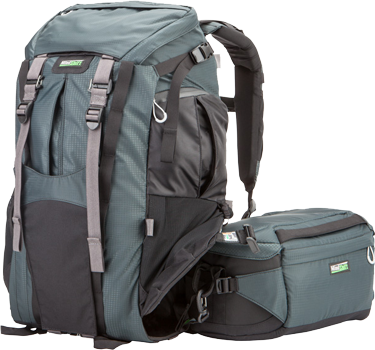 However, for everyday landscape work I would still opt to use my current conventional camera bag in preference to this one simply because it’s lighter and easy to use to access all my gear. The relatively small size of the compartment for camera gear meant that I had to store additional items in the upper section of the bag and this wasn’t very practical or convenient. Overall, the Rotation 180º Photo Backpack is a very well made bag that would no doubt suit some photographers very well especially those who do a lot of hiking or when travelling. I would consider it to be a specialist bag for particular uses and in that respect the bag performs very well but there are perhaps too many drawbacks to make this a generalist bag that I would want to use routinely for my landscape photography work.

Where to Buy It

The MindShift Gear website is the best place to buy this bag, and any of the extras that are available.

It is also available on Amazon, for those in the USA and some other countries.