Michael Snedic: From Amateur to Professional 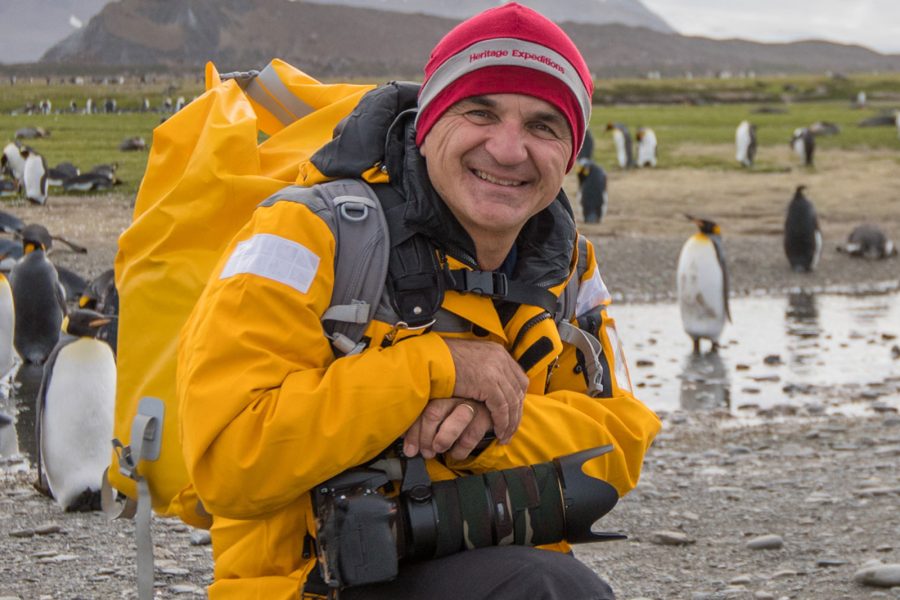 In our interview series “From Amateur to Professional,” we will be asking established nature photographers to share their photos and see how their practices have developed, changed, and improved over time. You’ll get to see the progression of their images, learn how they got started, and find out how they transitioned from amateur to professional.

To see more from this series, subscribe to our free newsletter.

Michael Snedic is one of Australia’s most accomplished wildlife and nature photographers, writers, and tutors. Over the last two decades, his photos and photographic articles have been published in numerous publications in Australia and internationally.

A Nikon School Instructor, Ambassador and Judge for the Nature Conservancy Australia’s Photo Competition in 2015, 2016, and 2017, as well as a judge for Birdlife Australia’s 2022 photography competition, Michael is passionate about wildlife and nature photography.

He has been photographing across Australia (and overseas) for the past 26 years and tells us he has loved every minute of it!

I started out in photography in June 1996. I had just moved to Lamington National Park, in the Gold Coast hinterland (Queensland, Australia) to start work as a nature-based guide. 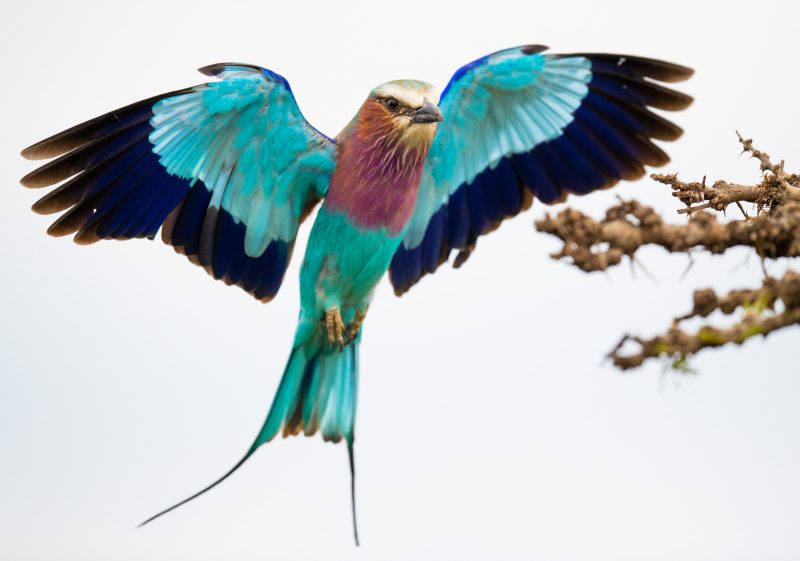 There was an amazing number of different birds and other wildlife, macro subjects, and landscapes, so I decided to try and capture them on film. 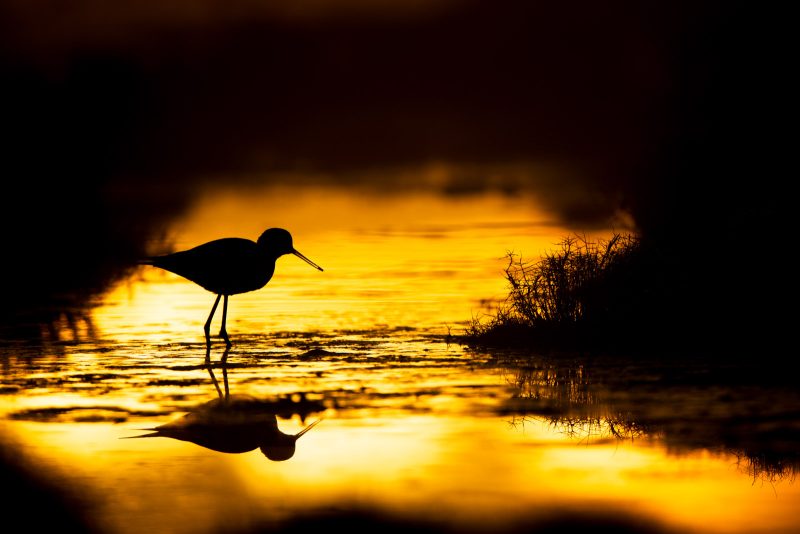 One of Australia’s foremost wildlife and nature photographers and documentary-makers, Glen Threlfo, became my photographic mentor.

One of the first shots I ever took was of the extremely rare Albert’s lyrebird. 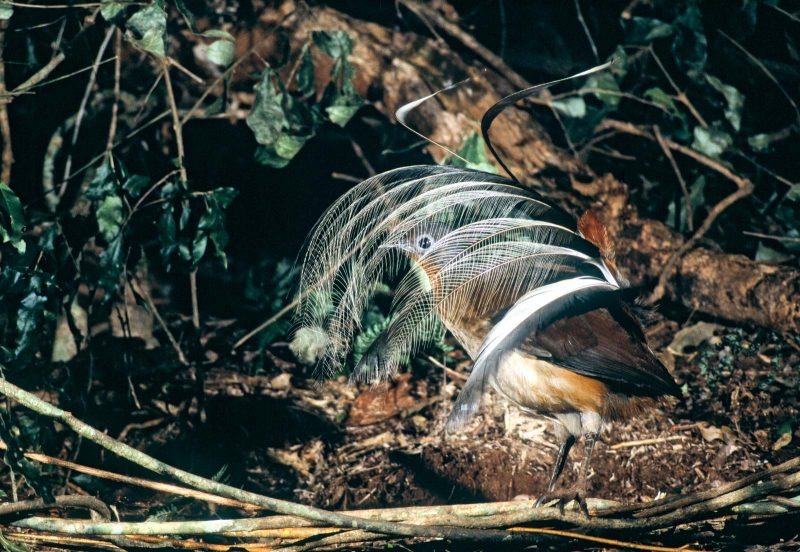 I sat in a bird hide daily for just under seven weeks to photograph this shy and elusive bird. I was the fourth known person in the world to have photographed this bird, using three camouflaged flash units.

I still look back at this image with real appreciation, as this image opened up a lot of ‘doors’ for me as a professional photographer.

Show us 2 of your favourite photos – one from your early/amateur days, and one from your professional career. Why do you like them, what made you so proud of them, and how do you feel about the older image now?

The image of a noisy pitta feeding chicks was taken in the first year of my photography (1996). Yes, I cut the feet off the parent bird but I was pleased with the image overall. 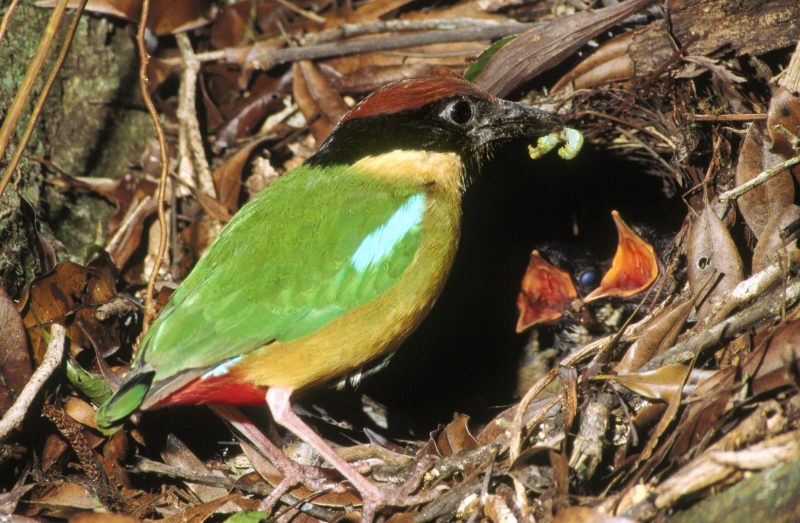 I still look at the noisy pitta image and it takes me back to when I was starting to think about doing what I love, but professionally. This image was also one of my first images published.

The image of a leaping polar bear in the Arctic archipelago of Svalbard (where I have just returned from to present my 5th photography expedition) is one of my favourite photos from my professional career. 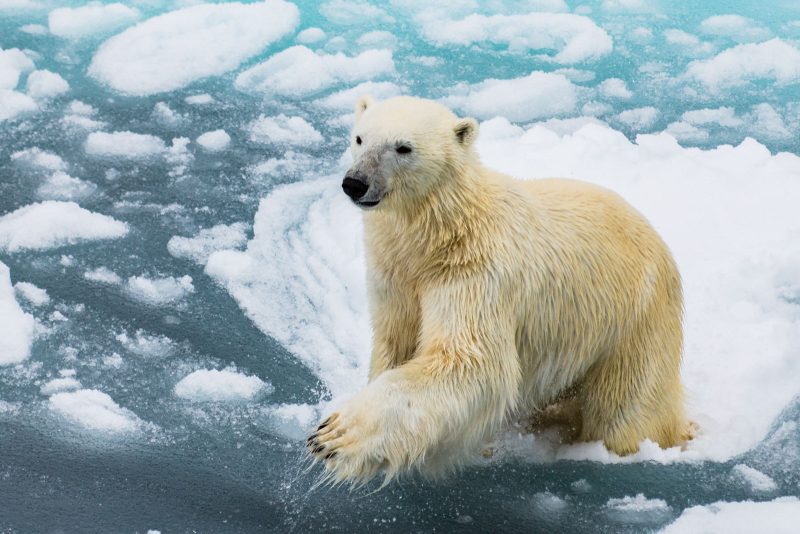 Seeing a polar bear so close to our ship and being able to show my participants how to best capture great images, as well as taking a few myself, is one of many moments where I have felt very privileged doing what I do.

After six or so years, I decided to see if I could make wildlife and nature photography my profession. 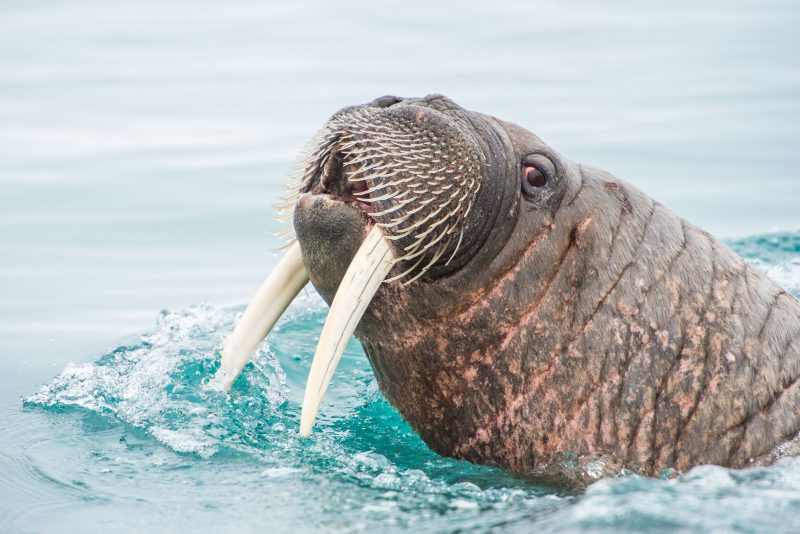 My images were starting to get published, I had requests for articles from magazines, camera clubs were keen to have me present audio-visuals on wildlife photography, and people asked if I could teach them how to take better photos. 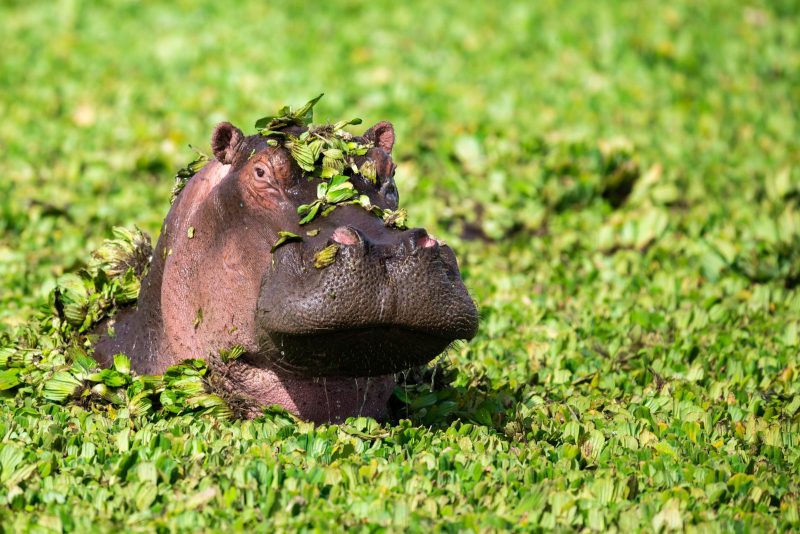 So basically six years from when I took my first image, I decided to take the business side more seriously and worked at building up my portfolio, creating a website, etc.

One ‘eureka’ moment was in Kenya with my photography tour participants; we were face-to-face with a lioness and her playing cubs, right next to our safari vehicle. 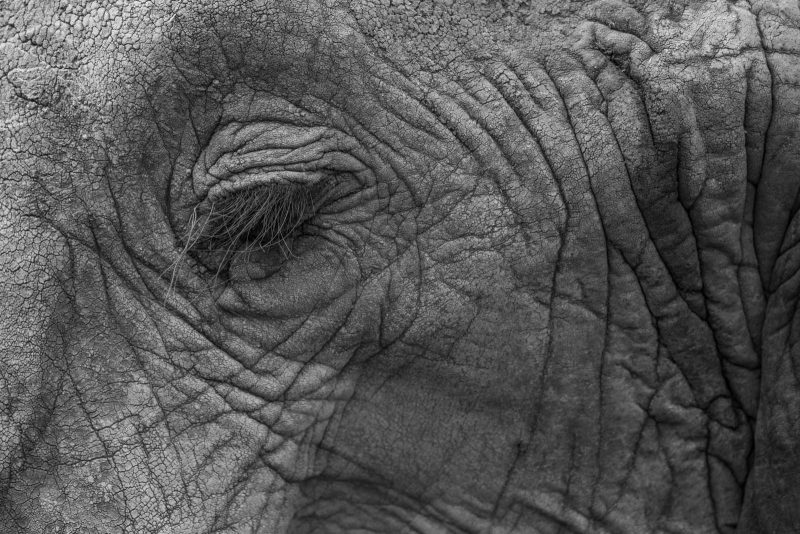 My guests were absolutely ecstatic to witness and photograph this, and I felt such gratitude and appreciation that I was one of the fortunate few who loves his work with a passion!

A second ‘eureka’ moment was when I was metres away from a family of mountain gorillas in Volcanoes National Park, Rwanda, Africa. I had grown up admiring Dianne Fossey and had read her biography. 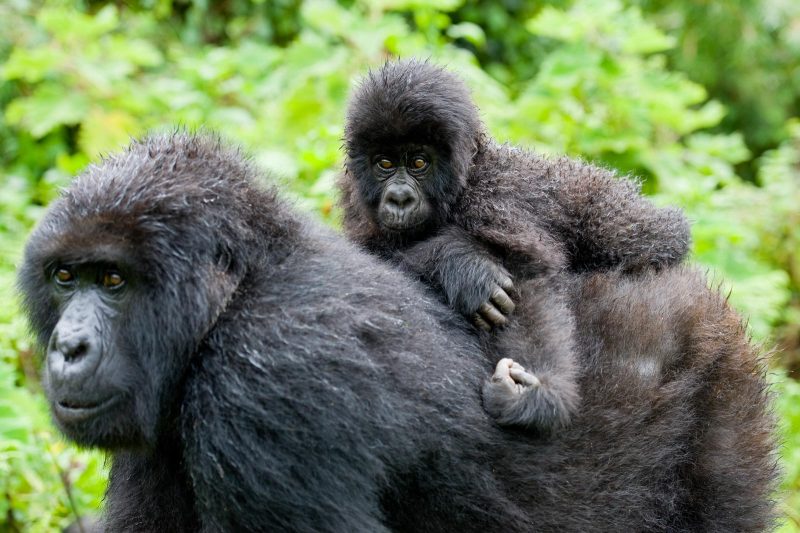 Back then, I couldn’t have imagined in my wildest dreams that I would be taking groups to see and photograph mountain gorillas, as my job.

There have been many subjects I have revisited over time and continue to do so. Photographing humpbacked whales from a ship during their annual migration north from Antarctica, along the east coast of Australia, is one of my favourites and I look forward to going back year after year. 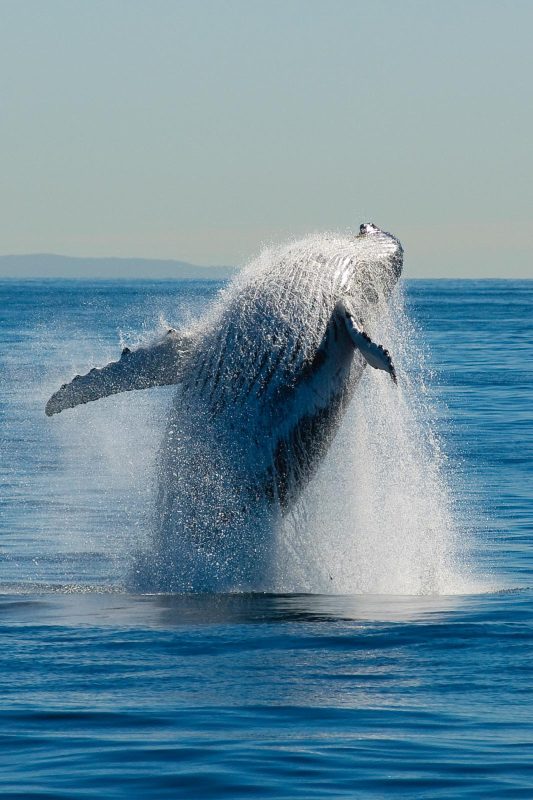 Having just purchased the amazing Nikon Z9, with its animal eye focus activation and 20 frames per second in RAW, means I will be able to shoot behaviour with even more accuracy.

Nowadays, I predominantly use Lightroom to edit my images. Over the years, Lightroom has improved out of sight and has become so much easier to edit RAW files with.

What was the biggest challenge you faced starting out?

When starting with photography, I was using film SLR cameras. It was very expensive to buy and process each roll of 36-slide film and you couldn’t see the results of what you were shooting until you sent the film away. 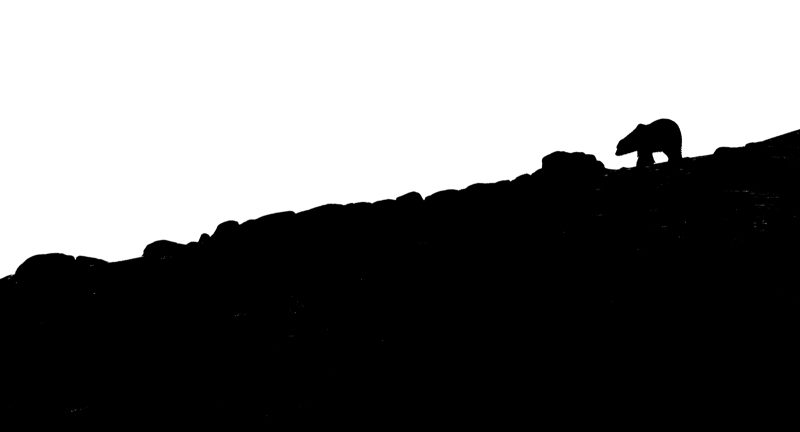 If you made a mistake with exposure or image sharpness during a particular shoot, it was too late to do anything about it as it was days later when you saw the results.

I wouldn’t change a thing!

The journey has been quite difficult at times, but ultimately very rewarding.