Jackal Tackling a Sandgrouse: How Johan Mocke Got the Shot 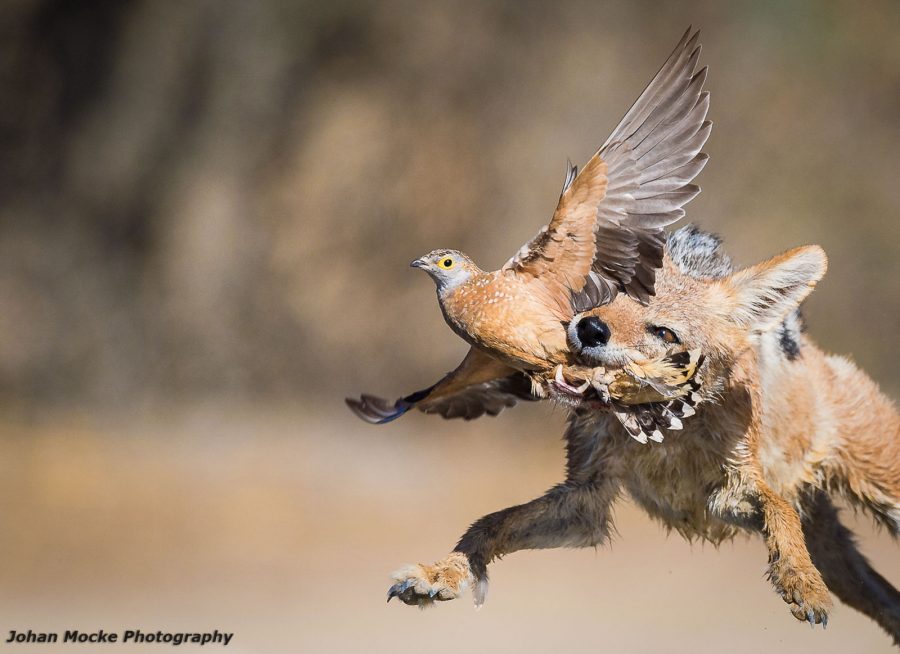 Home » Inspiration » Wildlife » Jackal Tackling a Sandgrouse: How Johan Mocke Got the Shot

Capturing birds in flight on camera can be tricky at the best of times, but South African photographer Johan Mocke has taken things a little further. His incredible image of a jackal taking down an unsuspecting sandgrouse has had jaws dropping all over social media.

To capture such an action-packed scene is no easy feat. Movements are unpredictable and things are over in mere seconds, but a keen eye and quick reflexes are just a couple of the ingredients needed to immortalise the event on camera. But Mocke has managed it, and the photos are quite something. 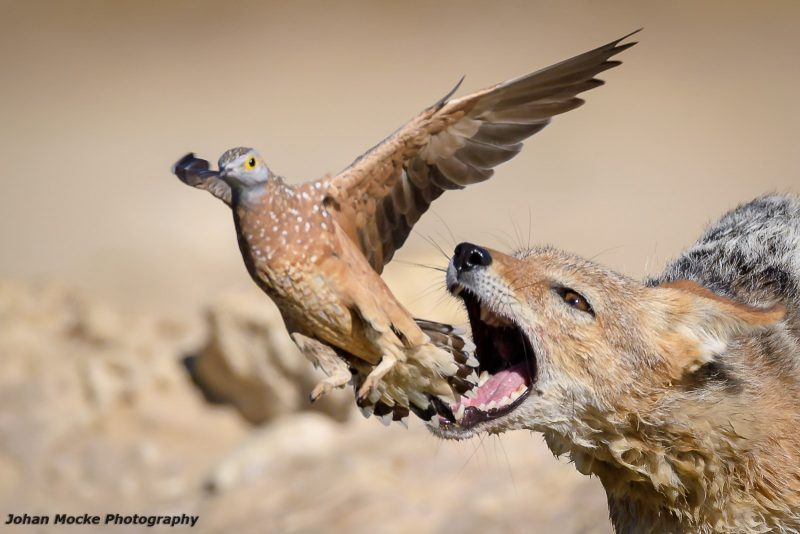 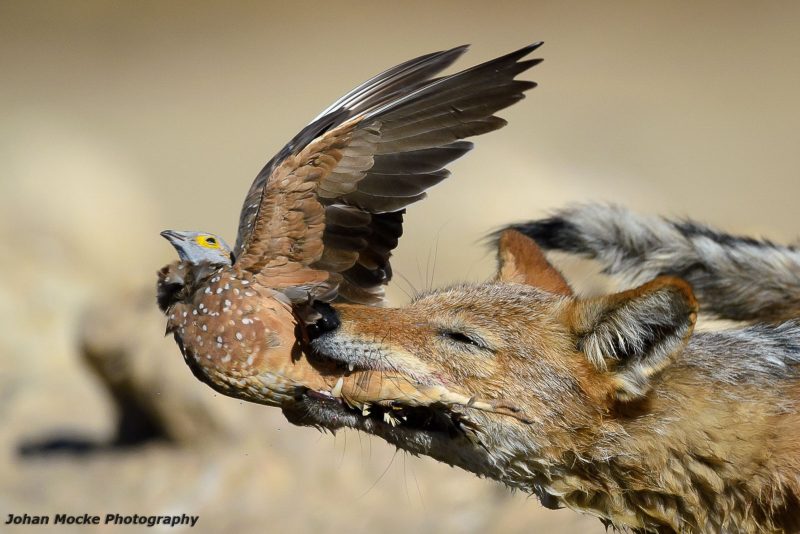 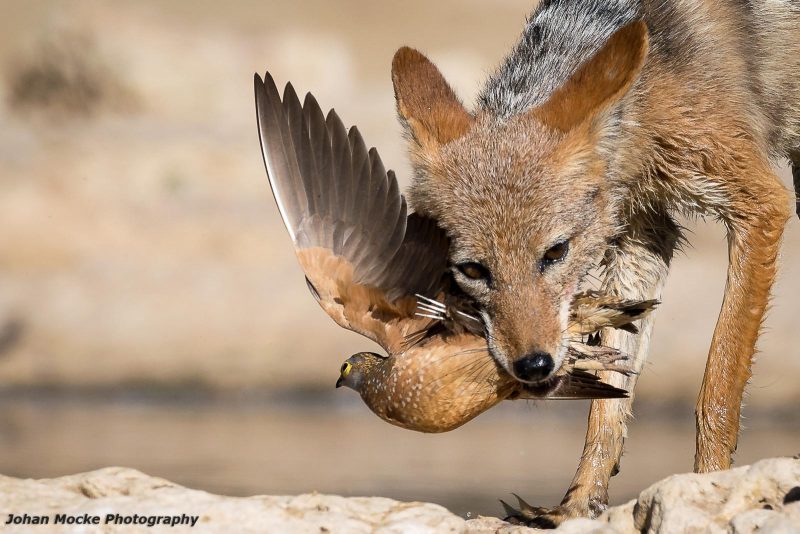 We caught up with Mocke and interviewed him about the once-in-a-lifetime photo, and his life as a photographer in the South African bush.

How long have you been a photographer for?

I have always been interested in photography – as far back as my father’s old brown box camera and the small instant Kodak. I moved to Pentax and later Sony when I started earning and could afford to purchase my own equipment. But I never really understood the magnitude of the art of photography until about ten years ago when the learning curve as a photographer began. 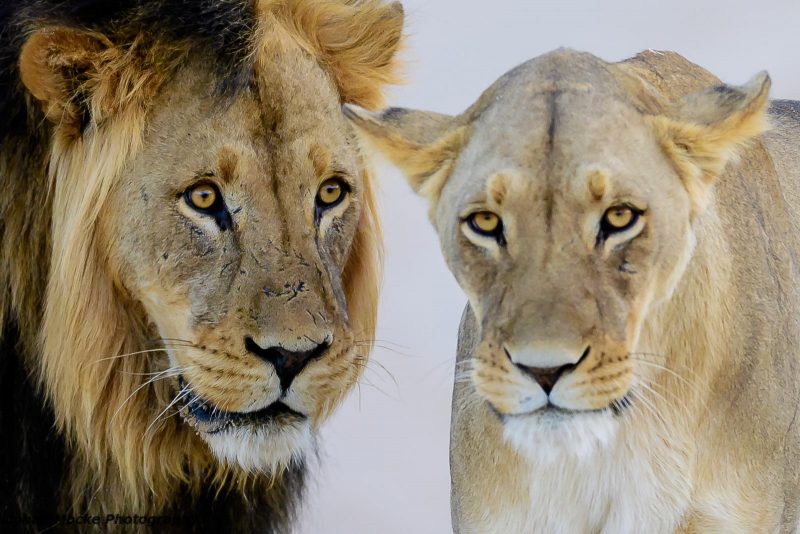 What brought you onto the path of wildlife photography?

One of my sons dated a girl whose parents were keen bird photographers. When I first met them and witnessed their passion and was exposed to their equipment, I was hooked! My wife “gave me permission” to sell our caravan so that I could buy my first decent camera and lens, and since then my passion has just grown.

How did your shot of the jackal hunt come about?

The shot is a combination of knowledge about the subject, the terrain, and hopefully of my equipment (plus the luck of the moment wildlife can produce).

This particular morning my wife Elaine and I left camp early because we knew that the first waterhole north of camp, called Qubitji Quap, was known for its sandgrouse and jackal activity. An added bonus is the morning sun being favourable for good photographs.

This was our 12th visit to the Kgalagadi Transfrontier Park, so we knew what to look for. On arrival, there were no birds or jackal, nor any other animal for that matter. 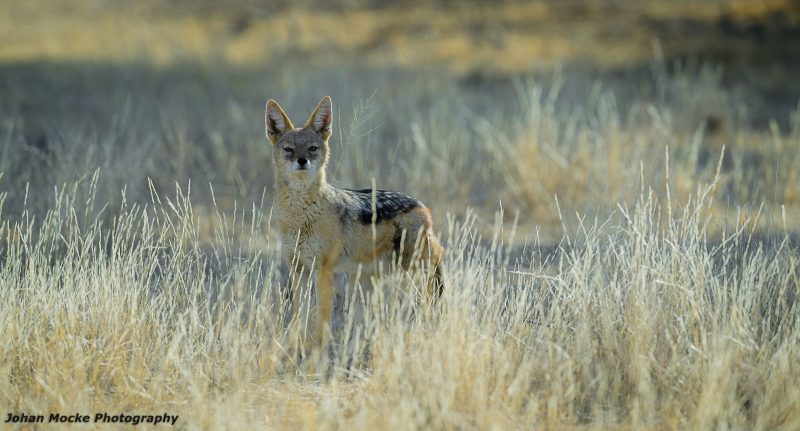 We decided to move on to another waterhole about 10 kilometres away, but still did not find anything worth a photo. On our way back we went past the first waterhole again and switched off the engine just to soak up the silence.

Two young jackals arrived, but they were just sniffing around. Not long after, flocks of sandgrouse started moving in and then, out of nowhere, appeared a third jackal – the star of the shot.

This was it – I immediately dived into action mode. It was fascinating – the jackal moved into position under a bush, about eight metres from the waterhole. As the birds descended to the water, they flew over him and he started running, jumping up in the air trying to catch them before they hit the ground. 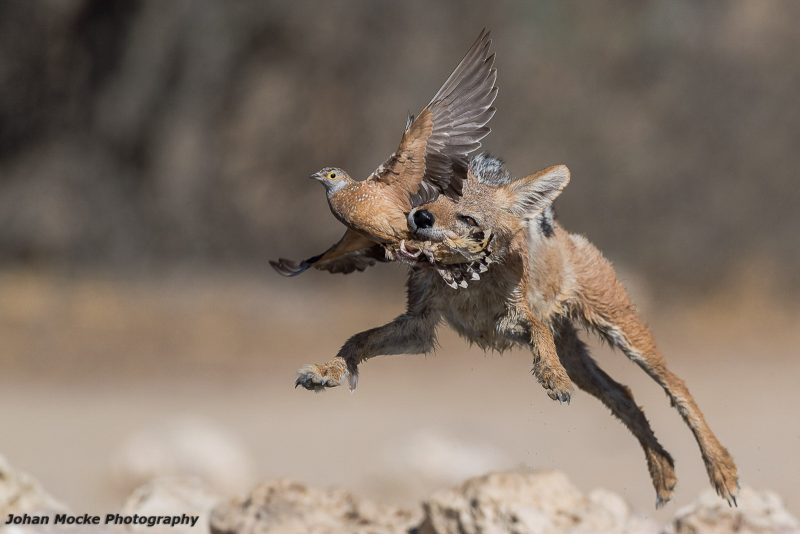 Within 15 minutes he caught and feasted upon five different birds. Then he vanished as quickly as he had appeared. The other two jackals watched in awe, as we were, and then sniffed the left-over feathers the ‘master’ could not be bothered with.

Since bird photography is also a passion, my camera is always set up for quick action, trying to catch them in flight. This day the challenge was to catch the jackal catching a bird in flight… and it worked!

Did you expect to find a hunt like this?

We know the Kgalagadi area fairly well and always find some action, but I must admit that this was a magical moment. This jackal was highly skilled and had so many successful hunts – it gave me ample opportunity to shoot it more than once.

How do you manage to focus on and freeze such a moment?

Knowledge of birds in flight photography definitely helped. After years of practising action shots of birds and other wildlife, I realised that I needed only one focal point – in this case the jackal’s face – knowing that if I succeed the shot will have power.

What equipment do you primarily shoot with?

I used a Nikon D5 and a 600mm Nikon prime lens. Ten pictures per second and a very good focusing system helped to secure a good action shot! The 600mm is a fantastic lens.

For the jackal sequence, I used my Nikon D5 and 600mm f4 lens alongside a Nikon 1.4x converter. I favoured a 1/4000th second shutter speed at f7.1 and ISO 400. I was shooting from inside my vehicle with the camera mounted on a door mount with a Benro gimbal. 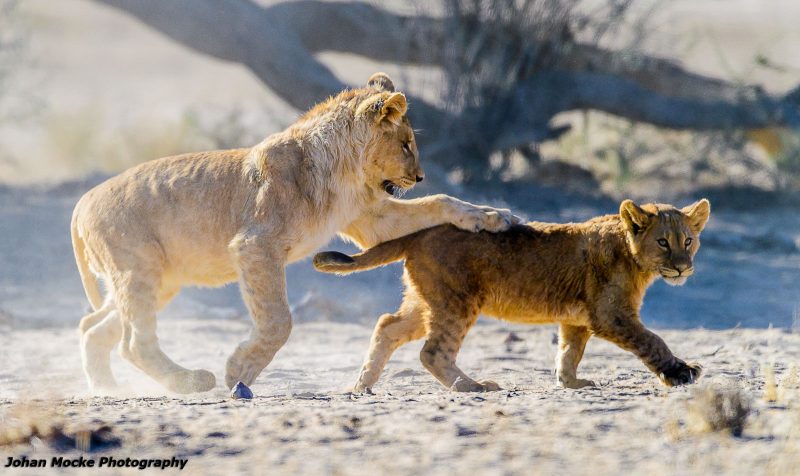 What is your favourite image you’ve shot?

That is a difficult question to answer! Being a wildlife lover, anything nature produces that can be captured on camera is such a privilege to see. I must admit that this action picture is one of my best experiences.

Other than that, we were also able to witness a lovely leopard sighting on another visit to the same park – not because of any particular action, but because of the very few occasions these animals present themselves. My meerkat action pictures against beautiful evening light are other favourites. 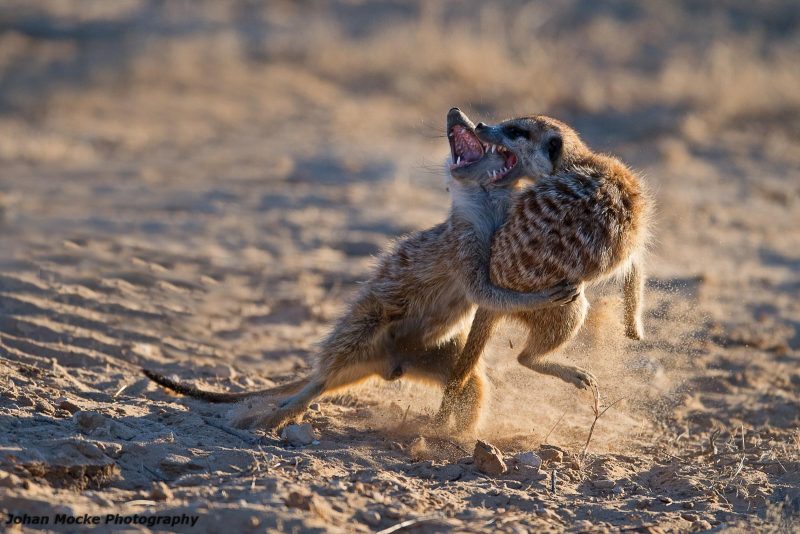 Where is your favourite place to work in the world?

It must be the Kgalagadi. We have to travel about three thousand kilometres for every visit, but it is the best park with the most amazing opportunities for wildlife photography. If I had the time and money I would explore more of Africa – Botswana, Zambia, Kenya, etc. and follow the abundant wildlife trial. 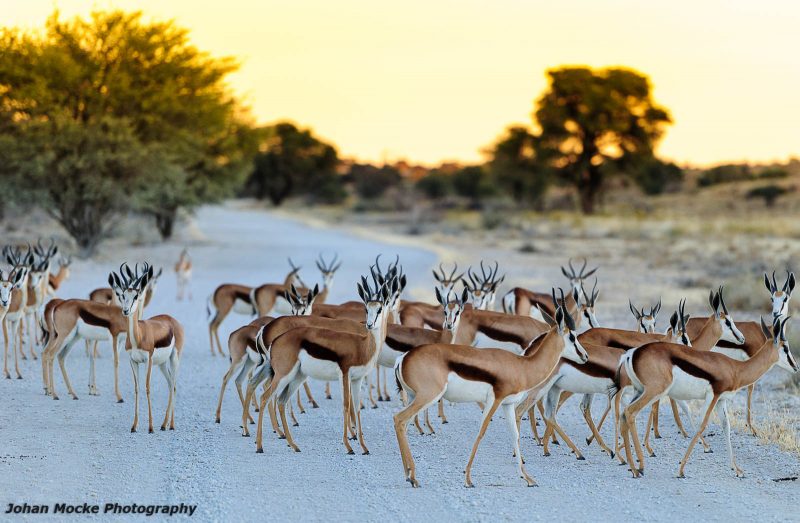 You do a lot of landscape photography – is that something you prefer?

Since I have to travel long distances for wildlife photography I choose landscapes as my secondary discipline.

The Western Cape has beautiful landscapes, but the challenge is to capture images that are not already published as tourist attractions. Being a pastor also means working more or less seven days a week. It is therefore not always possible to spend as much time as I would like to on exploring. 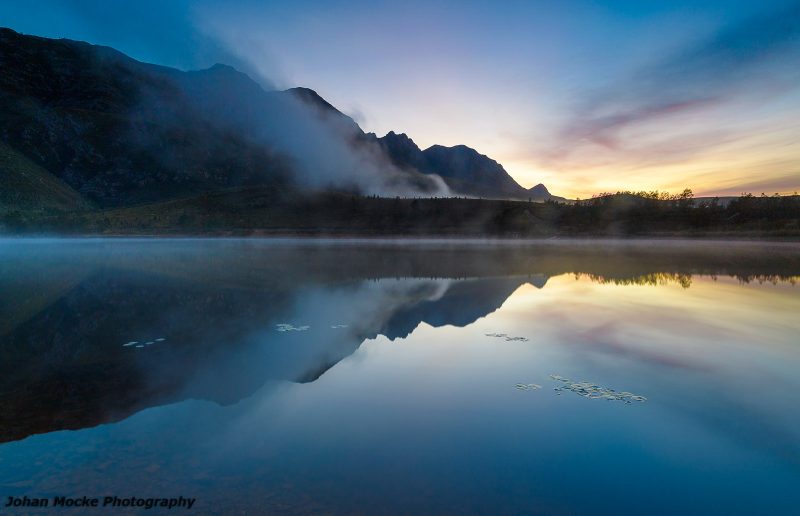 What would you say describes your photographic style?

Action and colour. Freezing an action of a wild animal always intrigues. If action is not possible I look for the essence of a single moment nature presents.

Enhancing the colours packed into a landscape scene is the second biggest thrill.

If you want to see more of Johan’s photography, please head to his website and Facebook page.