I Took My Camera to the Most Biodiverse Place on Earth 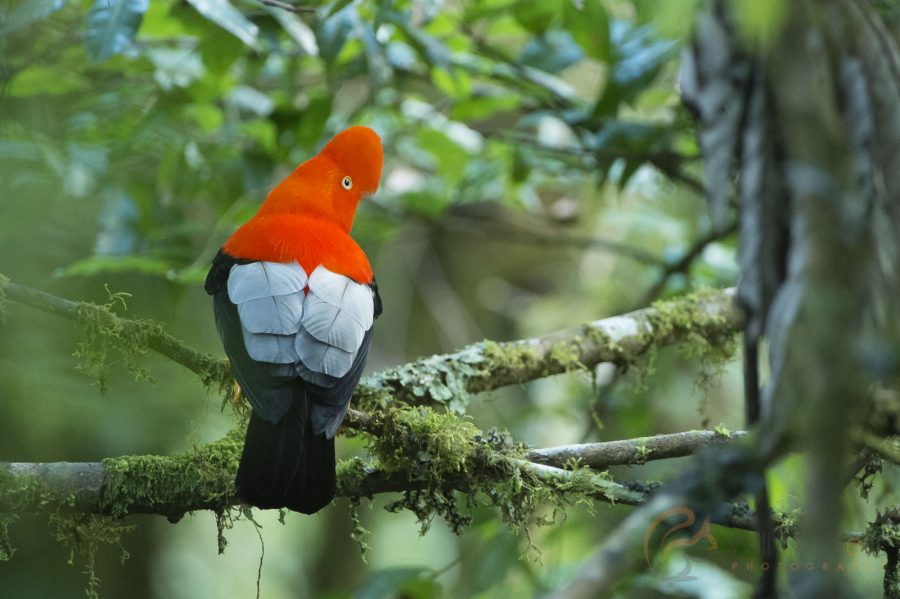 Manú, in Peru, is officially the most biodiverse place on the planet. It is home to over 1,000 species of bird (that’s 10% of all bird species), over 1,200 species of butterfly, and 287 species of reptile and amphibian. It is probably of no surprise that the Manú National Park sits inside the Amazon rainforest.

It has always been a dream of mine to visit the Amazon, ever since I first saw one of the many incredible aerial shots we see on the BBC capturing the vast forest canopy. In the summer of 2015 the opportunity came about, and I was soon packing my equipment to head out to Manú with my camera. I was on a mission to film and photograph as much wildlife as I could, documenting a regenerating area of forest on the edge of the park. We all know that deforestation is a huge threat to biodiversity all over the world, but I wanted to see what happened after death when the forest was given a second chance.

I had made contact with the Manú Learning Centre, a research base on the Madre de Dios river run by the Crees Foundation. They allowed me to come and stay in their base camp, home to a variety of scientists studying how forests regenerate overtime. 40 years previously the area was completely cleared for farmland, but upon my arrival it was already dense forest. Backing onto the relatively untouched forest of the park, this is the perfect opportunity for scientists to study if and how animals return following deforestation.

Each day I would slip my cameras into waterproof bags, strap the tripod to the back of my backpack and head off into the forest armed with my machete. The sound of capuchin monkeys was a regular one, and hearing them calling was relatively commonplace.

Whilst I spent most of my time looking for primates, others working in the reserve would often collect amphibians and bring them back to base camp to take measurements. They were soon released back to where they were found, but first I would take the opportunity to photograph them in my pop-up studio. Here’s a little ‘behind the scenes’ of how it works.

There were an unbelievable number of frogs found over the 10 week period I was in the Amazon. The species in the following image are as follows, from top-left and clockwise: Dendropsophus parviceps, Ameerega macero, Phyllomedusa vaillantii and Scinax garbei. 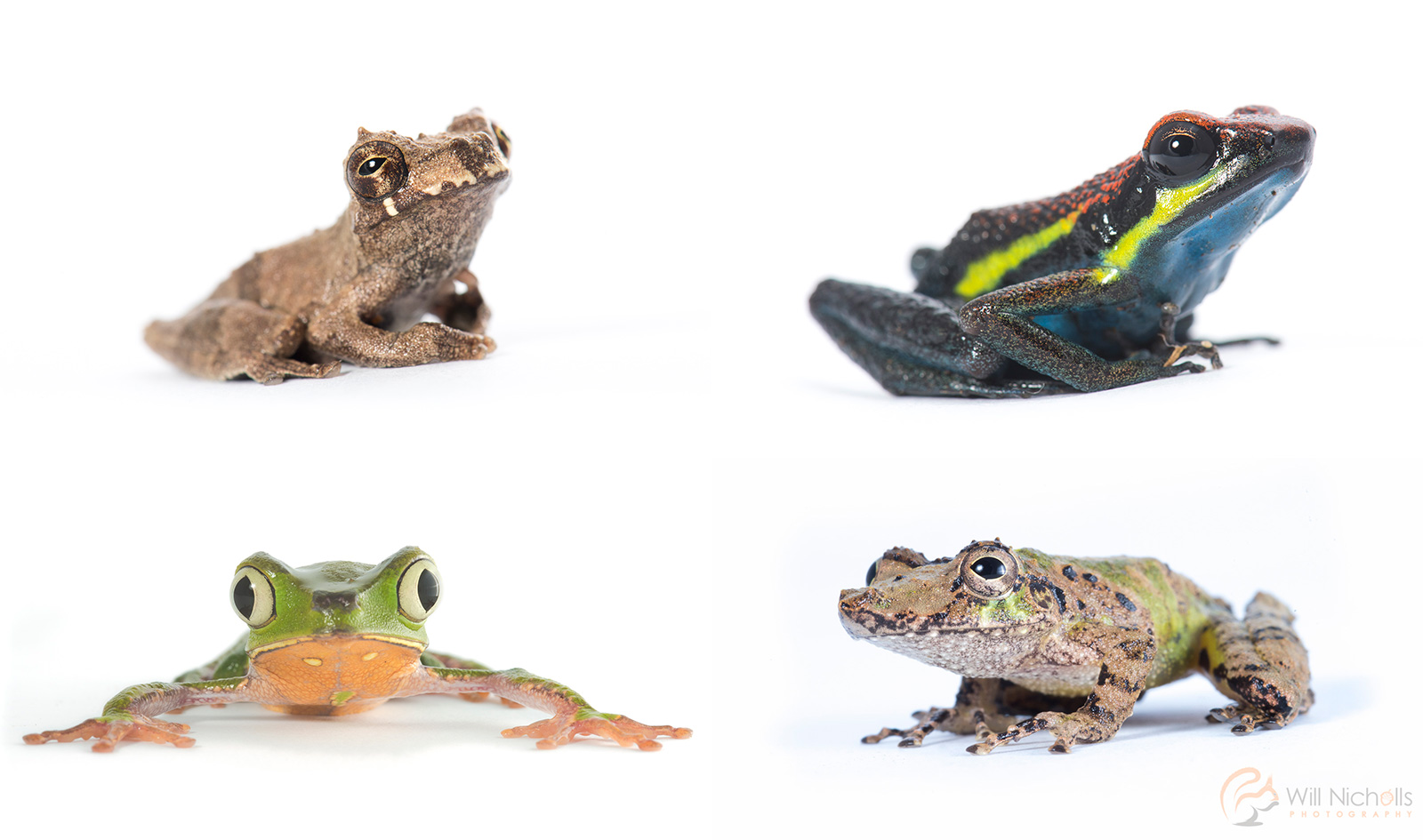 However, the most amazing frog I saw was a glass frog. It quite literally lives up to its name, with translucent skin that allows you to see straight through to the organs and green bones. But this frog also indicates a healthy, regenerating forest as they occupy very specific ecological niches and microhabitats. 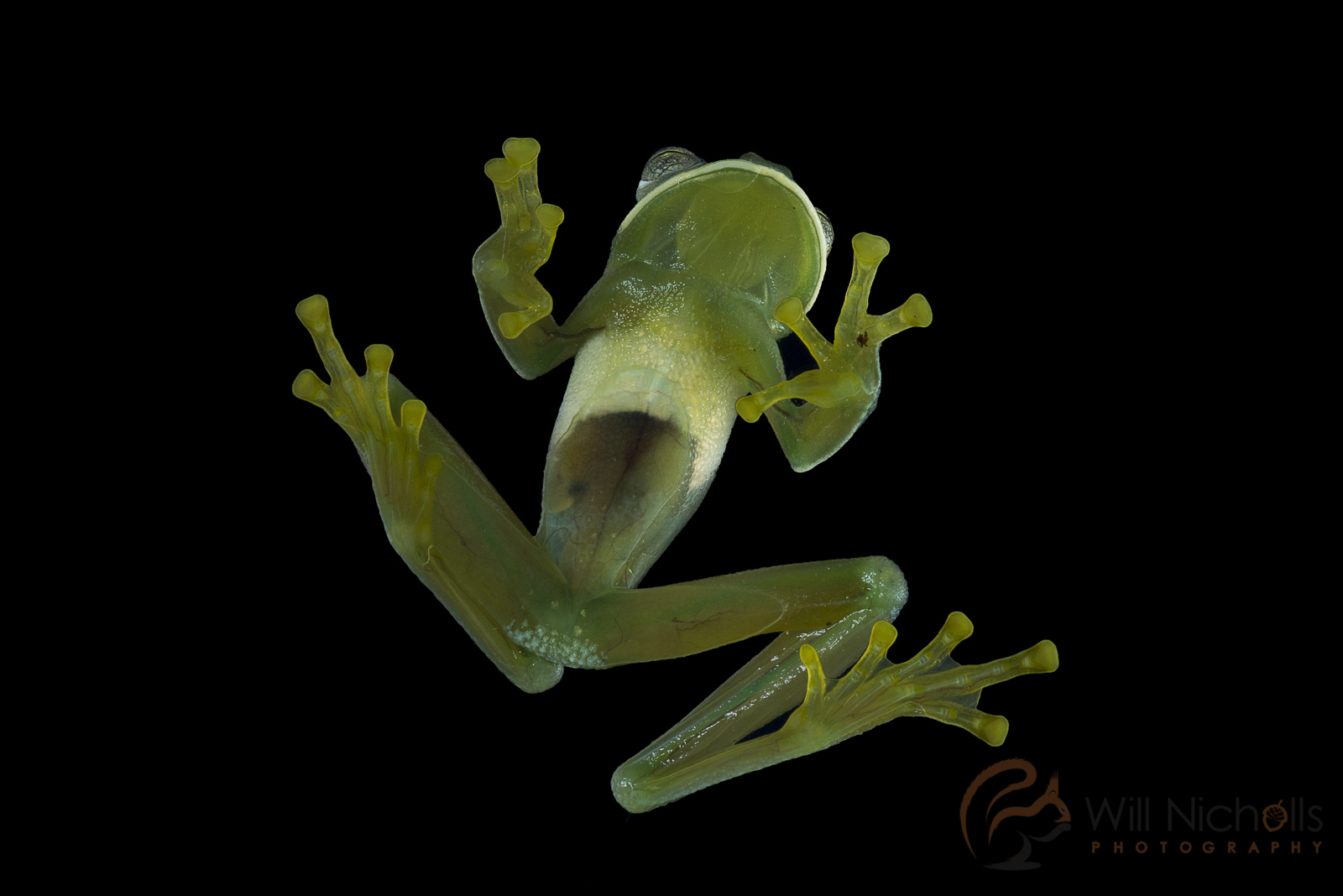 The final highlight from my lightbox was this incredible caterpillar I stumbled across whilst trekking back to base camp. Just look at those long, golden spines. 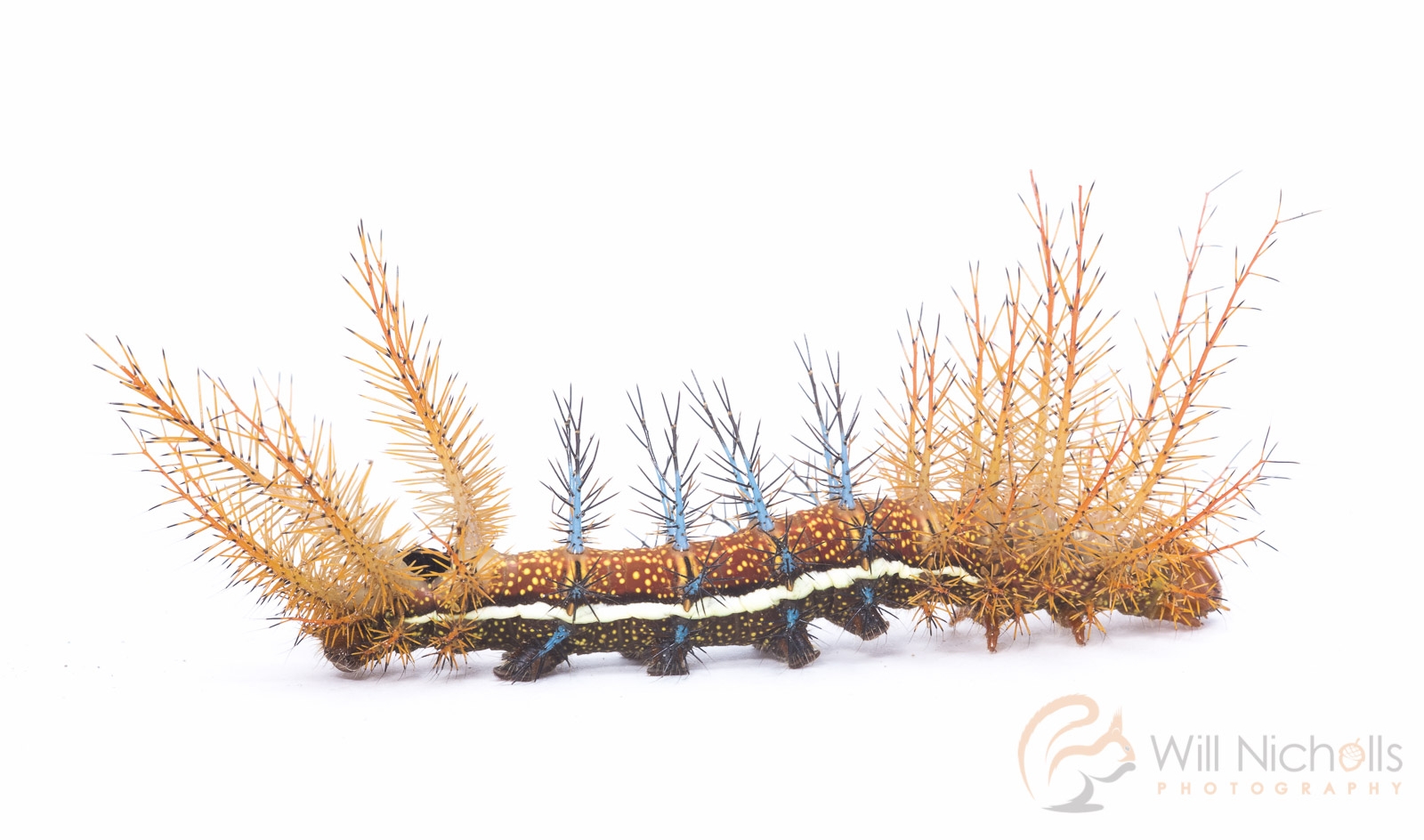 But the most memorable moment was when I first came into close contact with primates in the rainforest. I’d been there for 8 weeks at this point, and whilst checking a remote camera trap at a clay lick (an area animals come to benefit from essential minerals that are in the ground) a stick fell at my feet. Thinking nothing of it, I continued to work at the camera trap system. After about 15 minutes, I looked up to see 5 Peruvian spider monkeys (an endangered species) staring at me from 10 metres away and almost on eye-level. Instantly I went into action mode, dropping my bag and grabbing my camera – something that almost had me lose the entire rig to a large pool of mud. 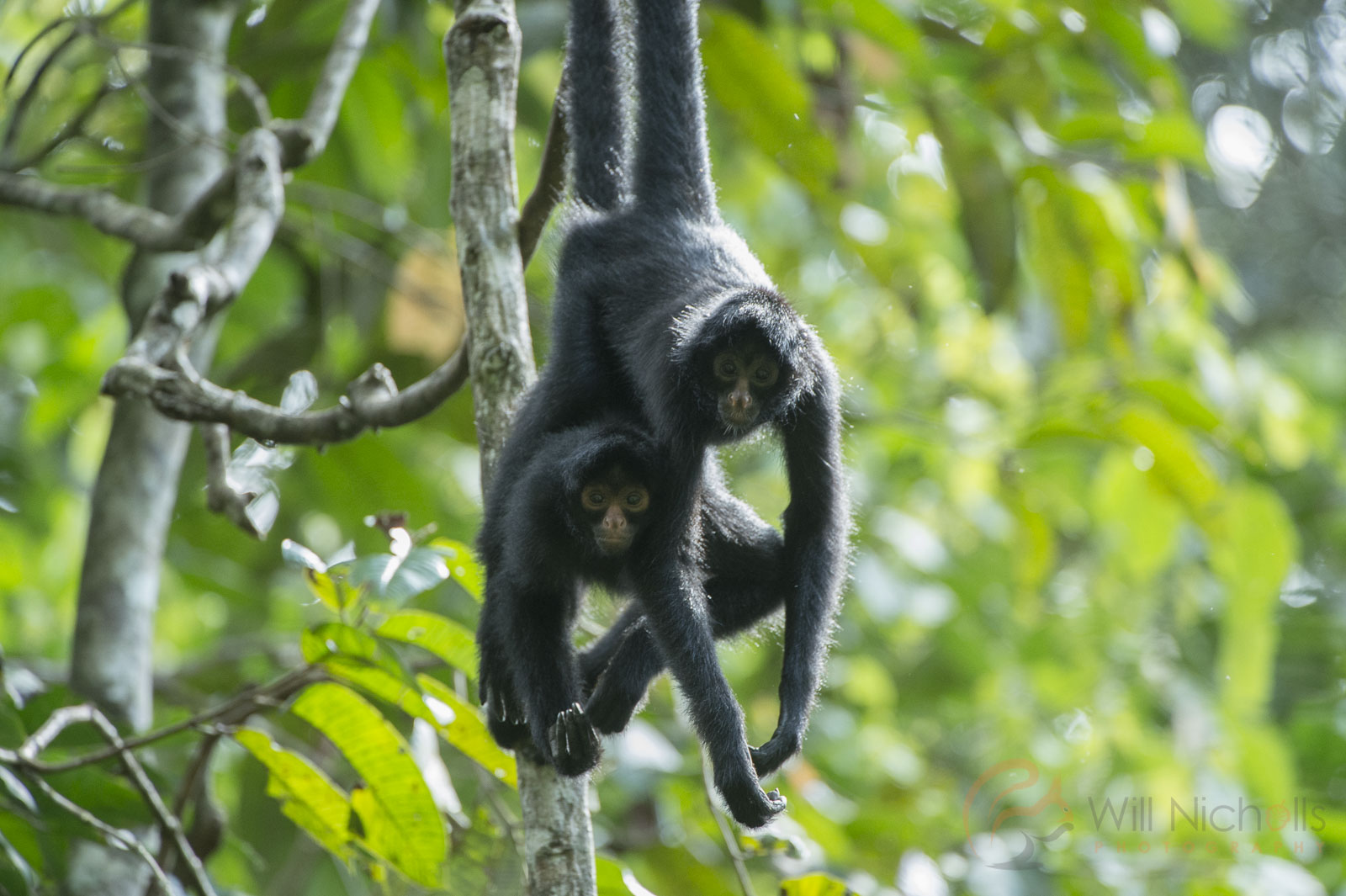 The afternoon sun was coming through a gap in the canopy from the side, backlighting the spider monkeys. It was quite challenging due to the dark colouration of the animals, but I managed to expose the image properly and bring out the hairs thanks to some effective rim-lighting. 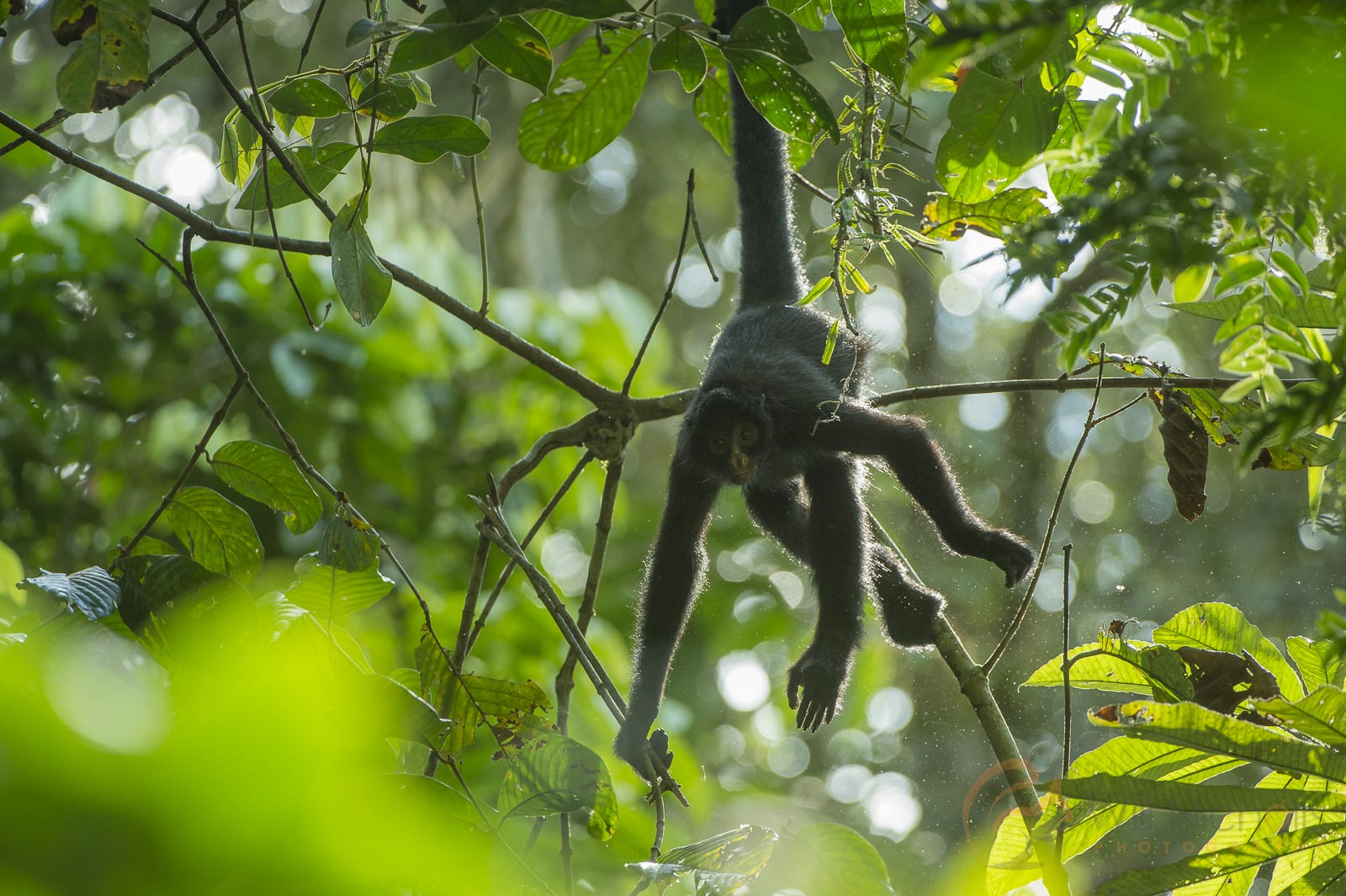 The monkeys soon began to disappear, much to my disappointment. But I decided to wait before packing away my equipment, and sure enough 10 minutes later the same spider monkeys returned with the rest of their troop. I was now surrounded by them, and treated to an hour of their company.

The presence of an endangered New World monkey like the spider monkey is of the upmost importance to a reserve like that of the Manú Learning Centre. It shows us that if a forest is left untouched and given time to regenerate, keystone species will begin to return from surrounding areas. 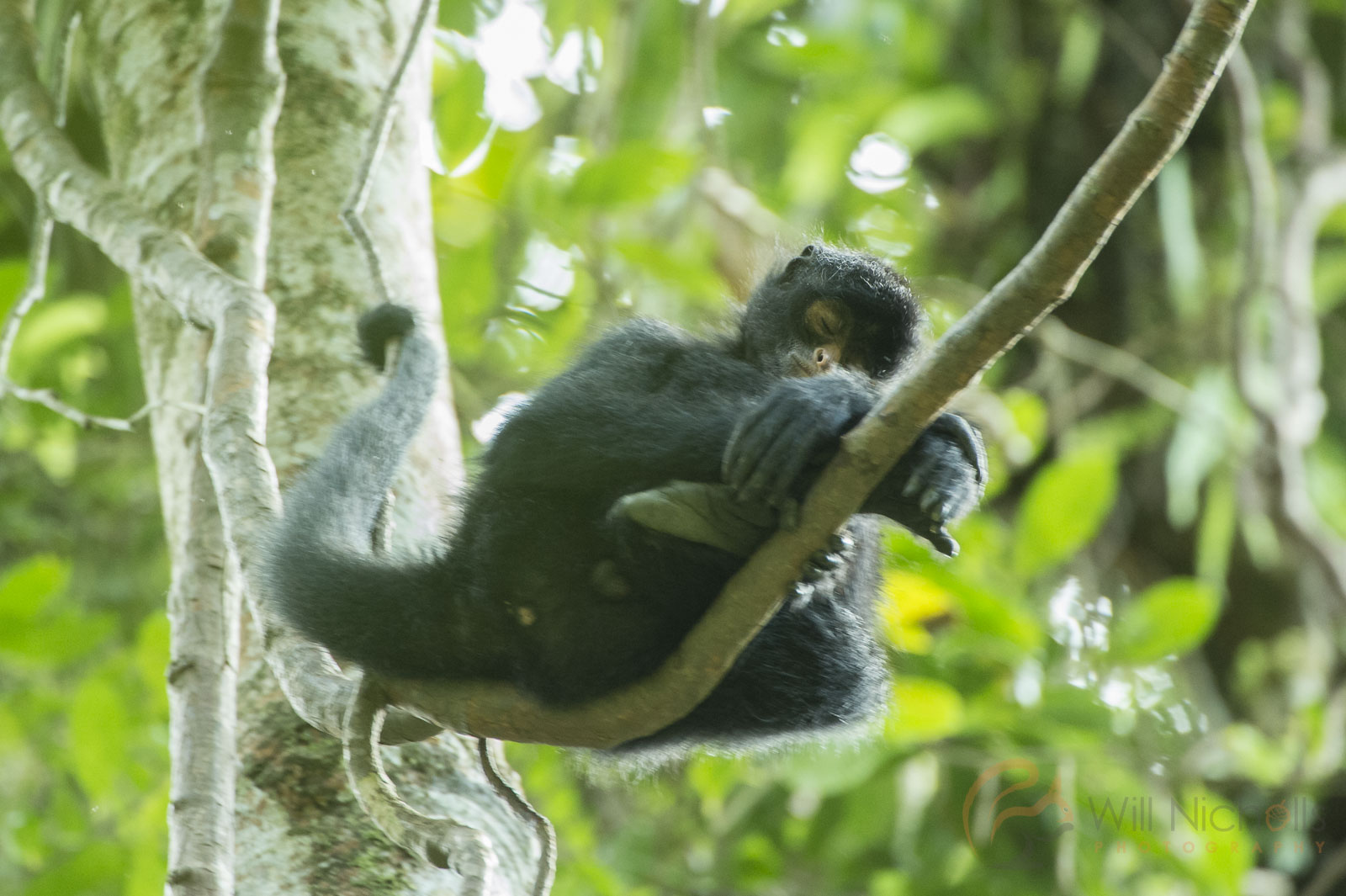 It’s not just the spider monkeys that have returned. There are other endangered primates too, such as red howler monkeys. I did track down a howler monkey that was giving a phenomenal roar from the tops of a tree, but I couldn’t get a line of sight with it, leaving me with only sound recordings.

However, there are also woolly monkeys in the reserve. This is another keystone species, and one that acts almost as a gardener for the rainforest. They are important animals for seed dispersal and their return to the reserve is one that is celebrated. The day after my encounter with the spider monkeys, I was moving through to a satellite camp where I would stay overnight in the rainforest in an attempt to find animals in the early hours. On the way there, a large branch crashed to my feet – these monkeys meant business.

Suddenly, huge woolly monkeys were crashing through the trees from all directions. They were approaching with one mission: to show who was boss and protect their group. Luckily, they soon calmed down and I was able to capture images of them watching me. 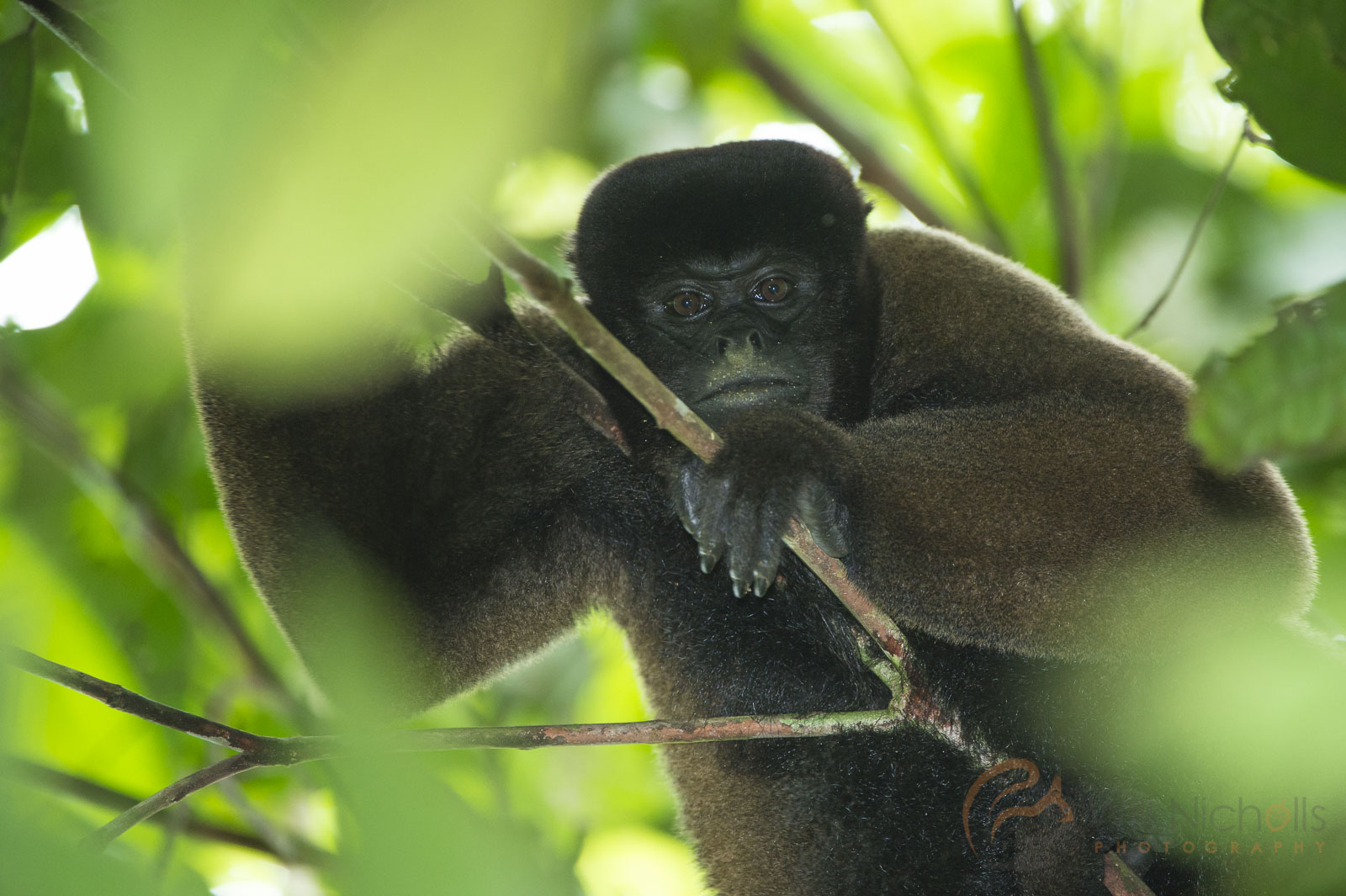 I found that they had a much more dominating presence than the spider monkeys. Their large, thick coats causing them to appear much more bulky than the slender spiders. 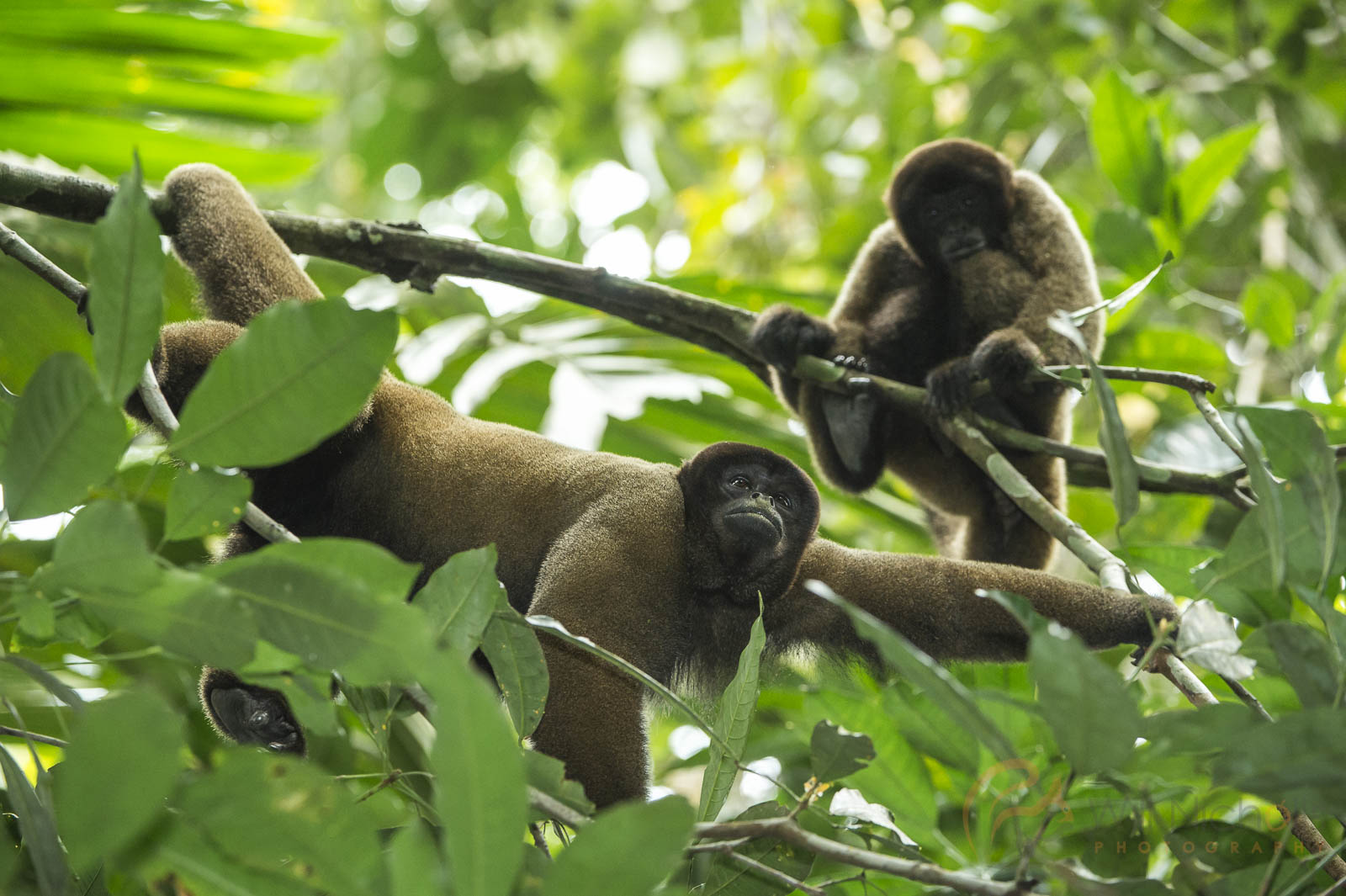 I was even treated to a quick glimpse of a young woolly monkey that swung down from the canopy for a look. 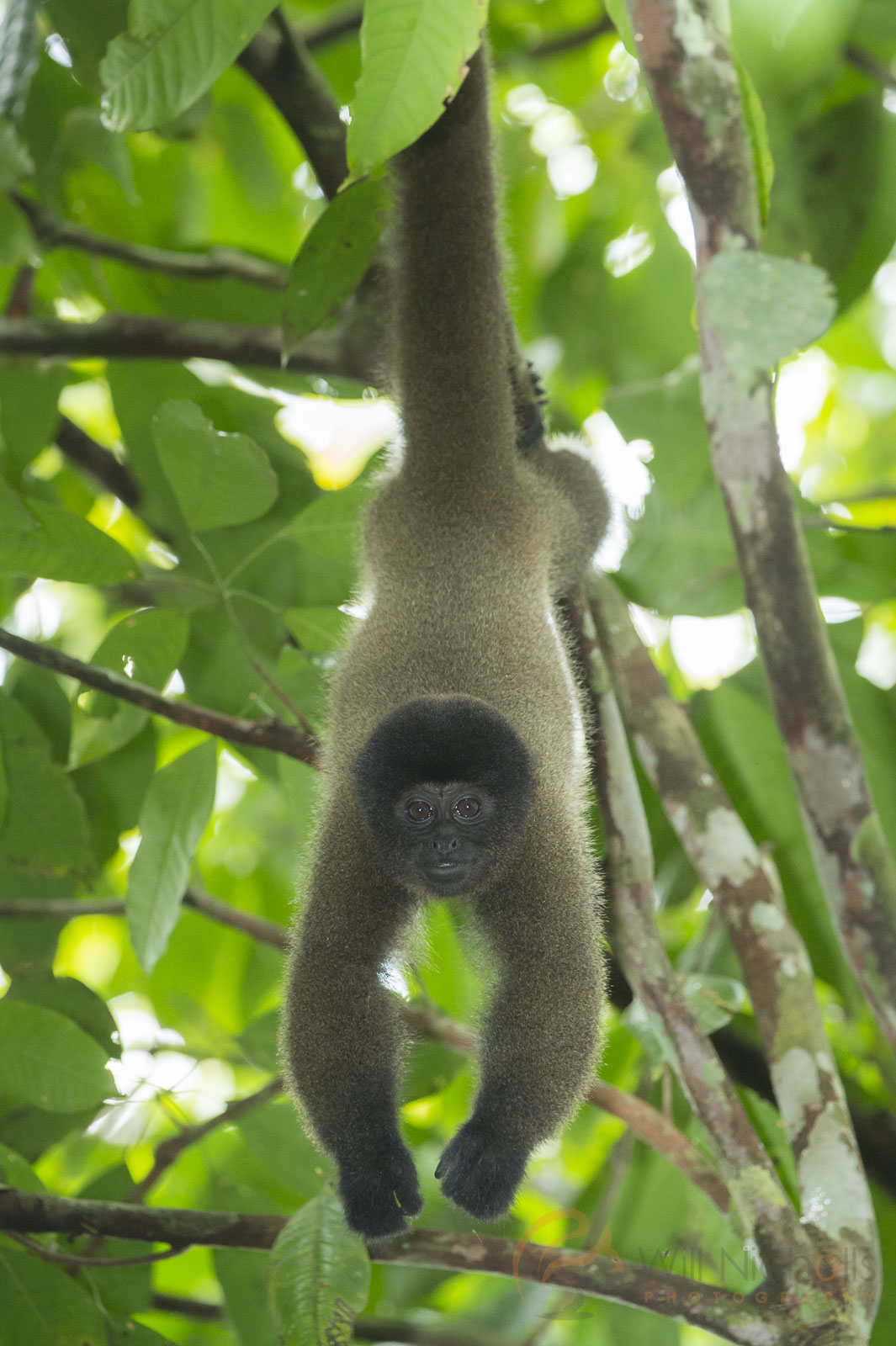 I was not given such a long stint with the woolly monkeys, and they were gone within 15 minutes. Nevertheless, it is an experience I will never forget. It’s important not to anthropomorphise animals, but it is hard not to feel like you can relate to these curious creatures. They are clearly highly intelligent beings, and you can see that just by the way they interact and investigate situations.

“But what about your camera trap?” I hear you cry. On my final day in the reserve, I returned for the last time to my camera trap that had been sitting all alone, watching and waiting through storms and the incredible heat of the rainforest for the last few weeks. I spotted the faintest mark on the trail just behind my trap, almost completely inconceivable. But there was something about the scattering of dust on a rock that told me something had passed through the area, and I was sure I could make out the outline of a toe. I checked the trap with baited breath… 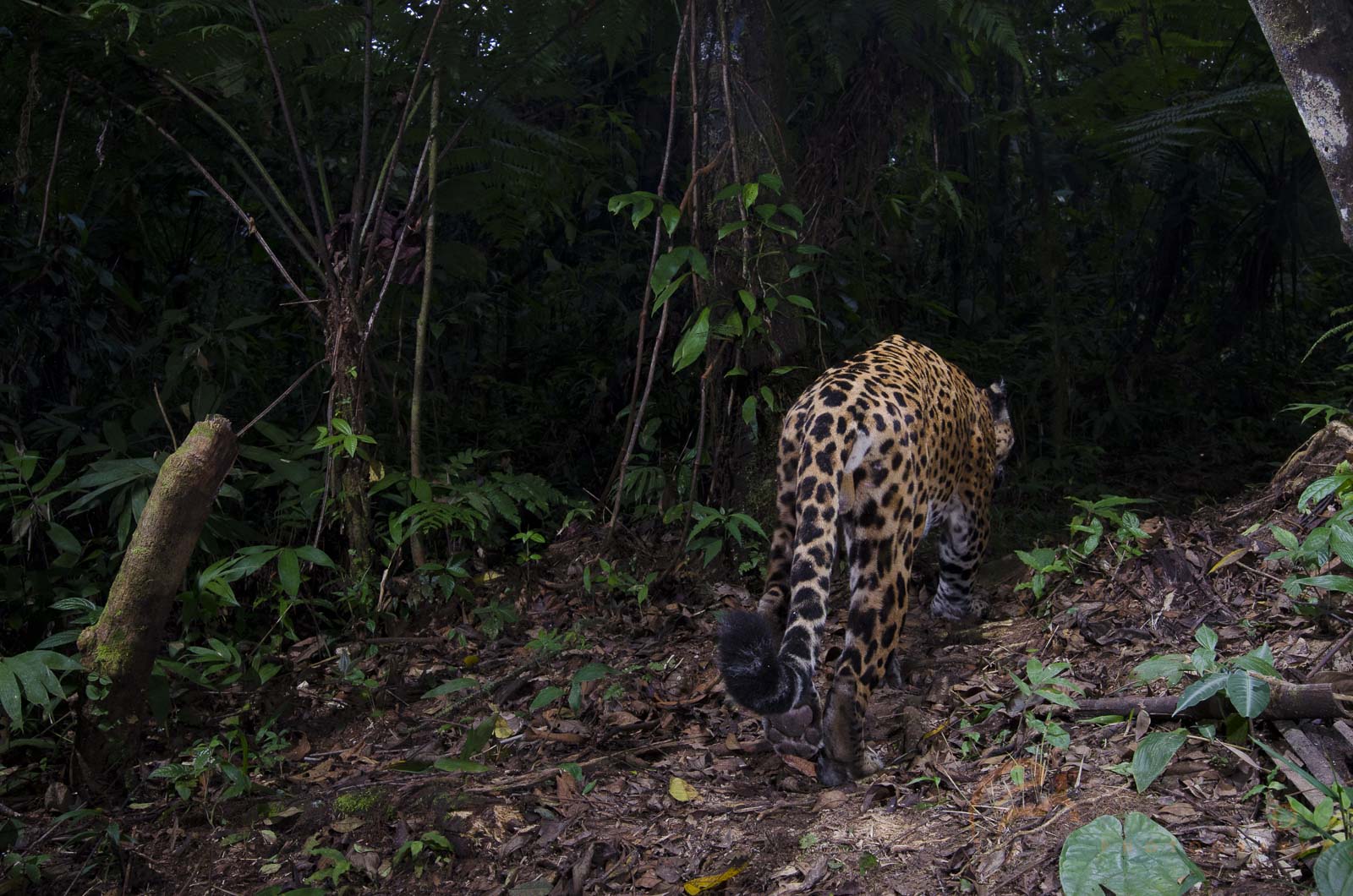 A jaguar! Albeit the backend of one, the fourth largest cat in the world had passed straight through my camera trap system. This was the first time I had ever tried camera trapping, and having a big cat on my LCD screen left me leaping for joy. There was even an added bonus, and despite it being another animal’s rear, the sight of a giant armadillo (Priodontes maximus) was just as surprising. These are very rare mammals, spending days underground at a time. 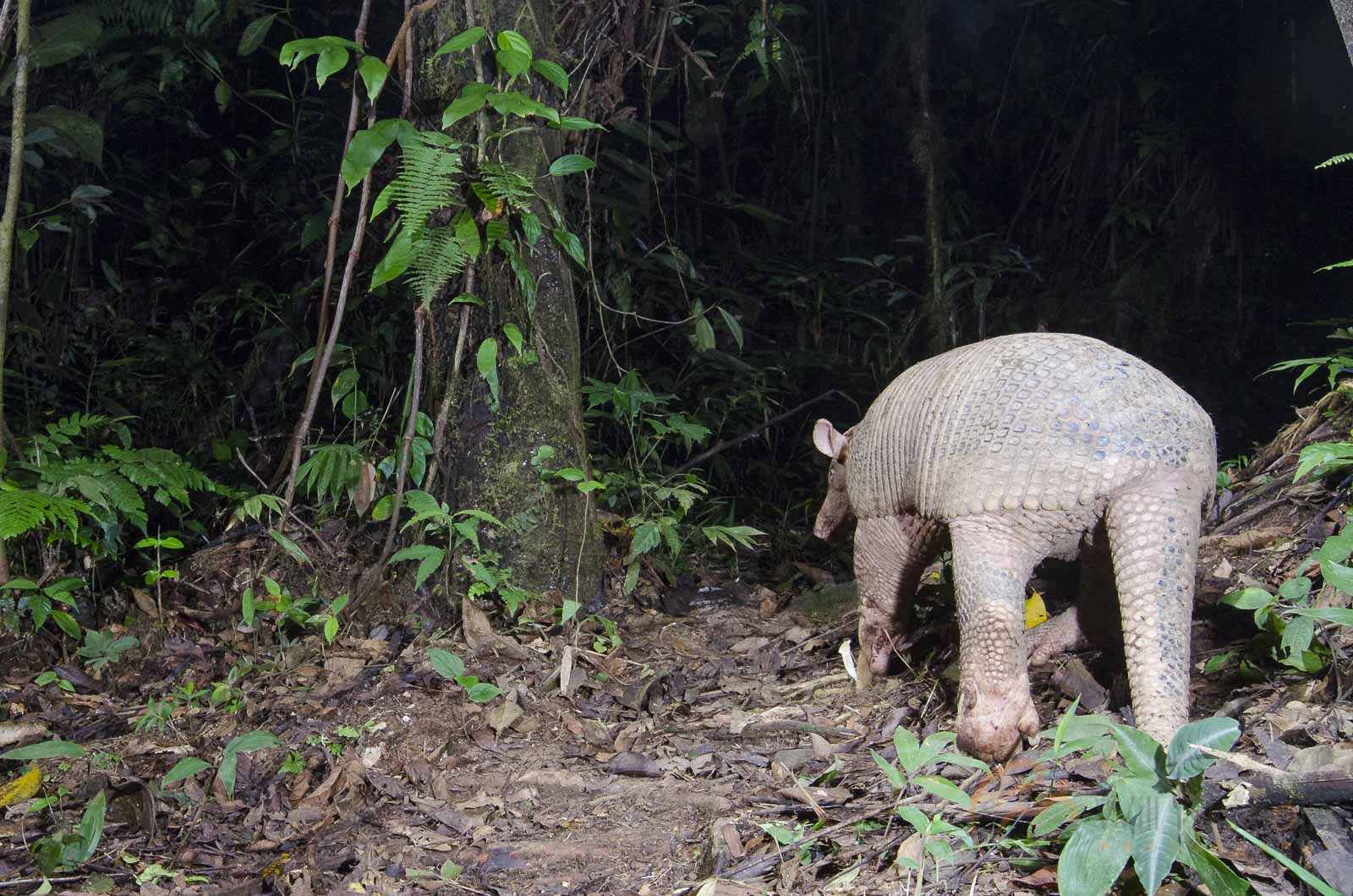 Scientists at the Manú Learning Centre reserve have found that 87% of species had returned to this area of regenerating forest (where 3 different ‘levels’ of deforestation had occurred, including areas that weren’t cleared entirely). This is an extremely promising statistic for a regenerating forest, bringing hope for the future of the Amazon. However, this is not a free pass to deforestation, but instead a call for regenerating areas to be set up as buffer zones around primary forest, reaching an equilibrium between conservation needs and human requirements.

So what can you do about it as a consumer? How can you do your bit to protect what is dubbed ‘the lungs of the Earth’? Well, you can start by not eating beef. Agriculture is the biggest threat to biodiversity in the world, and cows are extremely inefficient to rear. They require a lot of space, and they are also fed soya too. It’s a double-edged sword, with forest also being cleared to make space for monocultures of soya bean plantations to feed the cattle. If we want to live on a planet where rainforests stand tall, home to thousands upon thousands of different species, then we need to adjust our consumption.