How I Got the Shot: “Maltese Freshwater Crabs”

Home » Inspiration » Wildlife » How I Got the Shot: “Maltese Freshwater Crabs”

After 13 years on this rock in the middle of the Mediterranean that I nowadays call home, I finally dragged myself out to photograph the endemic and highly endangered Maltese Freshwater Crab (Qabru in Maltese). During all these years in Malta, I have heard about this elusive creature, but for various reasons (laziness might be one of them) I never managed to get out there to actually shoot them. People have told me they are mostly nocturnal and hard to find, so officially I prefer to blame those reasons for not having any images of them in my archive. 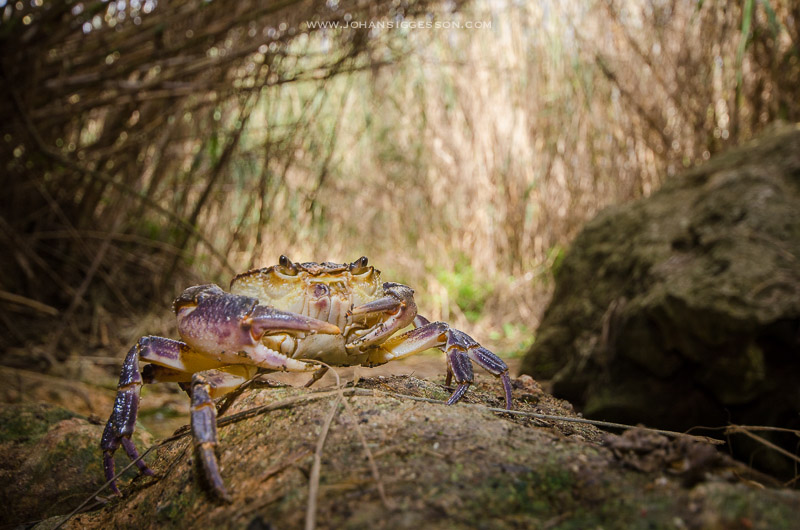 Better late than never they say… So finally, after receiving some detailed directions from a friend of mine, I set out to bag some images of these rare decapods. My wife gave me a maximum of 4 hours to be out in the field on this lovely Sunday morning due to previously decided commitments. The pressure was on… After some minor hiccups finding the actual spot, I finally sat down with my gear on the path crossing a tiny stream. All-year-round freshwater streams are hard to find and never very sizeable in Malta. The crabs require a constant supply of fresh water, so trying to survive on 2 of the driest islands in Europe makes for a tough life for them. Human activity is unfortunately not making it any easier either. 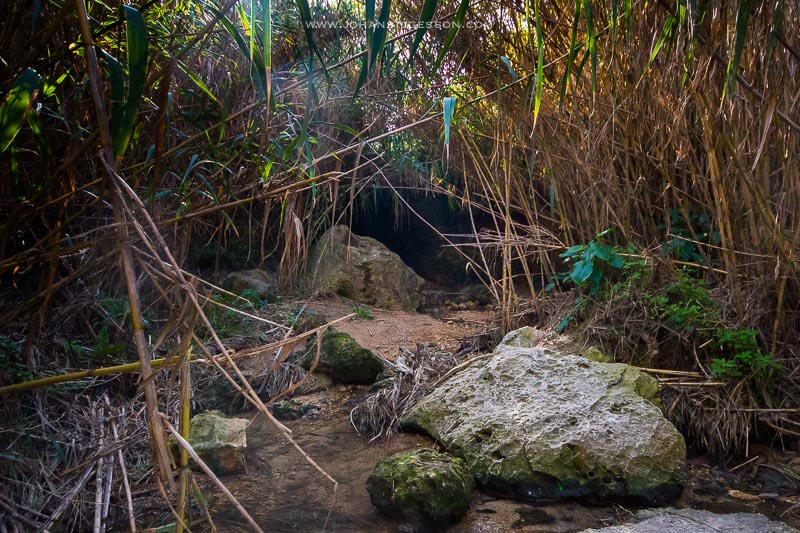 Extraction of fresh water, illegal poaching, and loss of habitat due to construction and pollution are all contributing factors to the unfortunate decline of this unique species. Existing only in a handful of small localities in Malta and its sister island Gozo, this species is particularly vulnerable. To be honest, I didn’t have much faith in being able to see any crabs, let alone getting a decent shot of them. Boy, how wrong I was…

When I arrive at a spot like this for the very first time, I try to take a few moments just sitting down to soak in the surroundings and make some initial observations. In this case I was shooting in a rather damp, small and dark space with overhanging vegetation. The shallow pool of water was surrounded by wet cliffs and crab burrows which I had to be very careful not to tread upon. I wasn’t impressed by the working conditions to say the least, but apparently it is prime crab real estate so there was no use complaining. Out came the Speedlight flash and the tripod. 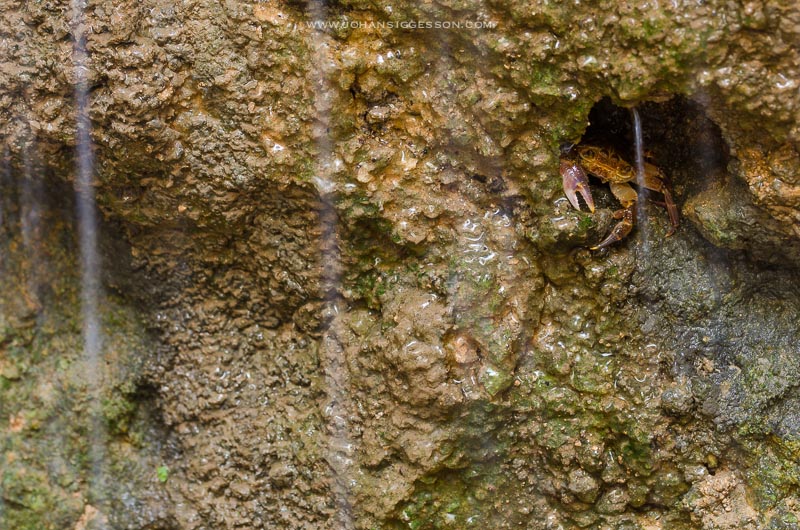 Surprisingly, after only 2-3 minutes or so I had spotted the first specimen. It was hiding in its burrow and rather hard to photograph, but I manage to get a few photos.

I’m over 6 foot tall, and my belly expresses the fact that I love good food, so the experience was made that little more challenging by the contortions I had to make so as not to tread on the burrows, which are laboriously dug by the crabs into the clay or sand.

My energetic searching for crabs in interesting spots for photography excited the interest of two Polish tourists passing by, who asked curiously about what I was doing. I did my best to describe the interesting facts about this crab, its endemism, etc. Whilst sitting down on the footpath next to the rock pool, a large crab casually walked in the shallow water between us. The crab was only a metre or so away from me. To get an interesting shot I needed to get down low and that meant being IN the water. Fortunately, I was on the concrete footpath that crossed the stream so there were no burrows that I could accidentally crush. I managed to snap 10-12 shots before the crab wandered on and disappeared into some thick reeds. I was soaking wet but luckily it was a warm and sunny day, so I quickly dried off. The tourists seemed very happy with my “guiding”, the sighting that most locals have never even experienced, and most probably with the sight of a wildlife photographer flat down in the stream trying to avoid getting his camera all soaked! 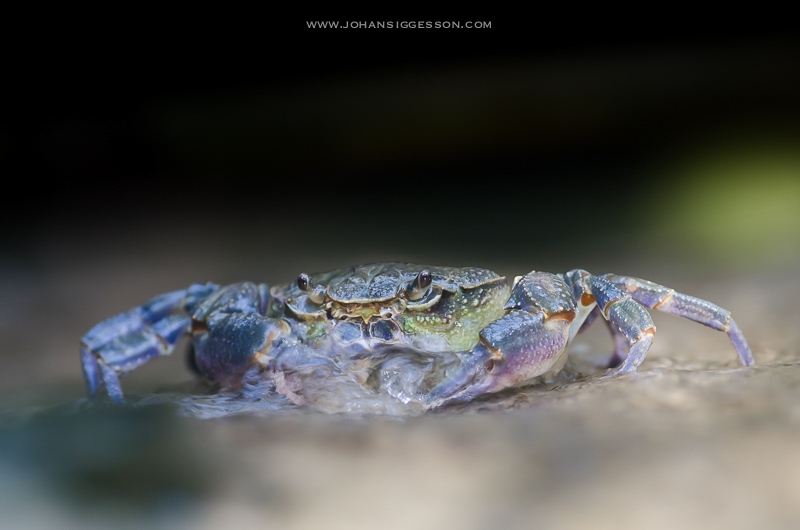 I decided to tempt faith and stay a bit longer (I called my wife and begged for another hour). Whilst watching a burrow, hoping that its owner would emerge, I suddenly noticed a movement some 2-3 metres on my left hand side. As I turned, I saw a huge crab saunter across the sand between the small stones and rocks. Already wet, I carefully lied down and again snapped some low-angle shots. In the never ending quest to get a wide variety of images, I changed to a wide-angle lens and slowly inched closer to the crab, without disturbing it. After getting a few good shots I noticed that the crab’s patience thinned out and he clearly showed me that it was time for me to leave. I backed off slowly and watched him make his way safely into a burrow. 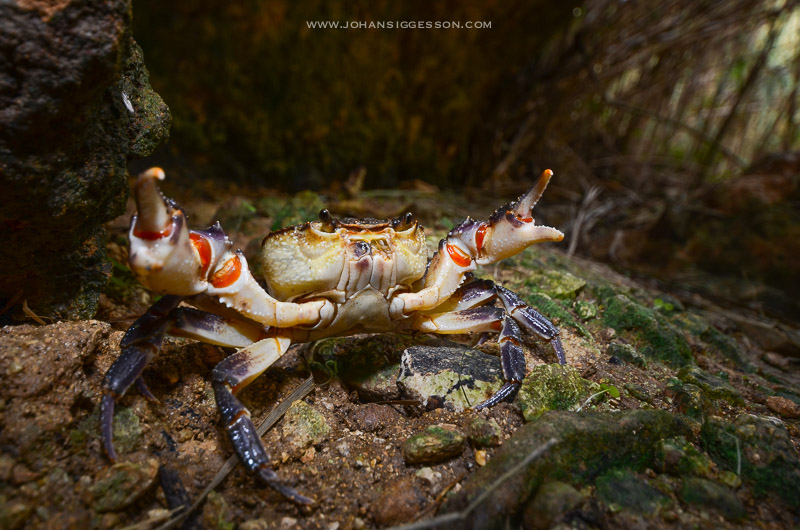 Euphoric with the day’s events, I packed up my things, removed some rubbish that someone less caring had left at the spot, and walked back to my car. What a day! I had bagged some great shots and enjoyed an incredible experience at a small, yet beautiful location on an island that is normally known mainly for its atrocious bird-hunting habits.