How I Got the Shot: “Bateleur”, by Ross Couper

Home » Inspiration » Wildlife » How I Got the Shot: “Bateleur”, by Ross Couper

I still think that camera makers should have warning signs all over their camera packaging stating “CAUTION: PATIENCE NOT INCLUDED”, and have you sign a waiver form at the time of purchasing that you have understood the terms and conditions of purchasing the camera and that patience is the one and only thing needed – everything else can be bought.

The reason I became a photographer was because I was actually a painter and found myself quite frustrated, as I was often commissioned to paint a whole lot of artwork in half the amount of time that it should take. I then thought that I would take up photography as a profession – how hard could it be to take a photo? One click and it is instant… or so I thought. 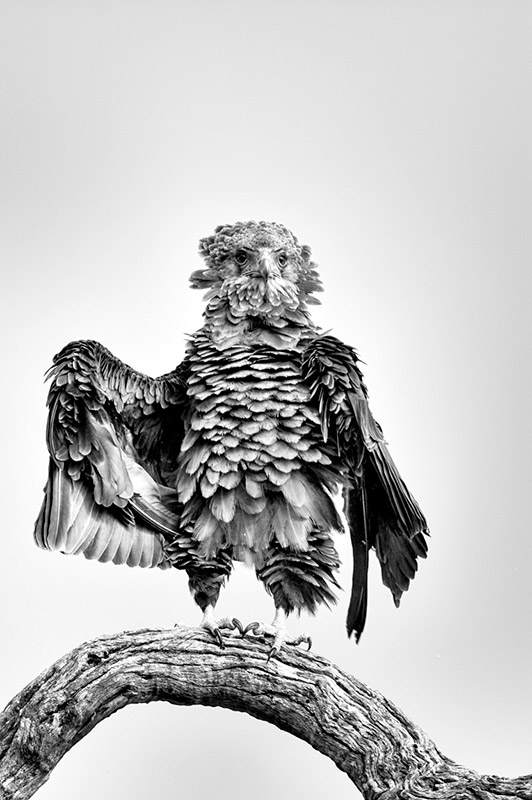 One of the toughest subjects in the wild to photograph would be birds, particularly in flight. I applaud photographers that have mastered this. Patience and skill, along with a large number of hours behind the view finder, enables them to transform an image of a bird on a branch into an unfolding story, or an action frozen in time. Whether the bird is in flight when hunting or performing a display for a mate, the frozen moment allows a viewer a unique perspective to the feathered creatures that soar above.

A bee eater seems to have 3 second rule of landing on a branch and flying away (at least for me), unlike some of the larger raptor birds seen in the wild that sit on a branch for 3 hours without flying. This is where you test your skills as a photographer, as everything has to be just right to get the shot: aperture, ISO, shutter speed and how you focus on your subject all come into play in a split second once that bird has flown off the branch; it is unlikely that it’s going to return, so it is all or nothing. 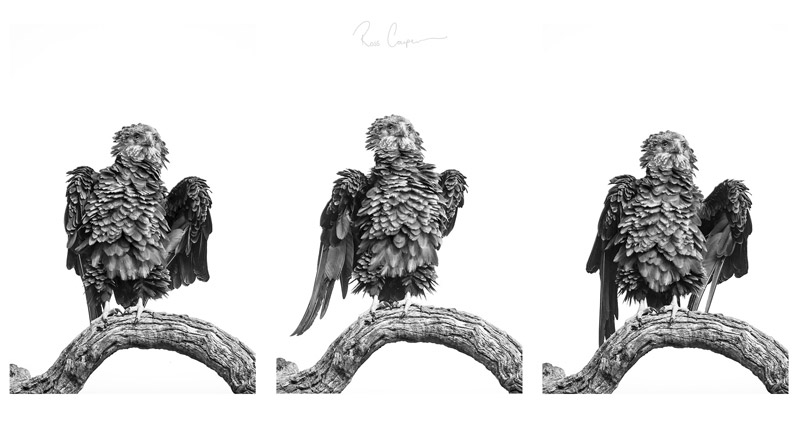 The first photo shown here was quite the opposite of the usual birds images captured. A golden light streamed across the tree tops and a cool mist whispered amongst the low lying hillsides – this was an inviting scene and I quickly grabbed my camera, heading out into the bush. After approximately an hour, I came across this Bateleur eagle preening itself in the mist with sporadic sunshine breaking through every now and again. I thought to myself “I am well positioned”: the branch the bird was on was a good height to capture it taking off, the sun was on the opposite side so light was good; everything was in my favour. After 30 minutes, I soon realised that the day was about to get incredibly hot, and with no roof on my land rover and no water it would be uncomfortable – but who needed it, this was going to be a quick shot! I was totally wrong!

After the preening continued for several minutes, the Bataleur started its ritual all over again. I didn’t think anything of it until I could feel the beads of sweat running down the side of my face and a slight cramp in my shoulder. It was then when I looked at the time and an additional 30 minutes had gone by. As the warm sun had burnt away the mist, the light was turning from a soft glow to a bright glow by the minute. Being a summer’s day, temperatures can reach the mid 30 degrees Celsius before midday; I knew that my time was limited to get the great picture that I wanted. It dawned on me that I was hoping for a bird in flight image, but it could turn out differently, particularly with the amount cleaning that took place on the bird’s part. The inevitable was that the bird would shake itself to dislodge unwanted parasites after preening its feathers, and the motion of the shake was what I was after – I wanted something unique.

The 30 minutes soon became well over an hour, but still nothing. Many wildlife photographers have this nagging thought in their heads when leaving a scene – “will I be missing out?”. There is even an acronym that is commonly used amongst safari guides – FOMO = Fear Of Missing Out. So there was no ways that I was going to miss this opportunity. With my finger on the shutter, ready for any action that this bird was going to show. My body started to ache as I really hadn’t positioned myself in the best way when I first arrived, thinking that it was a shoot and go opportunity. As desperate as I was to turn the vehicle on and to position it in a better spot so I did not have to strain my neck to look through the view finder, I knew that with the turn of the key the engine would start up and the last 1 and half hours would be lost as the eagle may fly off. There was no way I would be able to start the vehicle and have my eye on the prize at the same time. 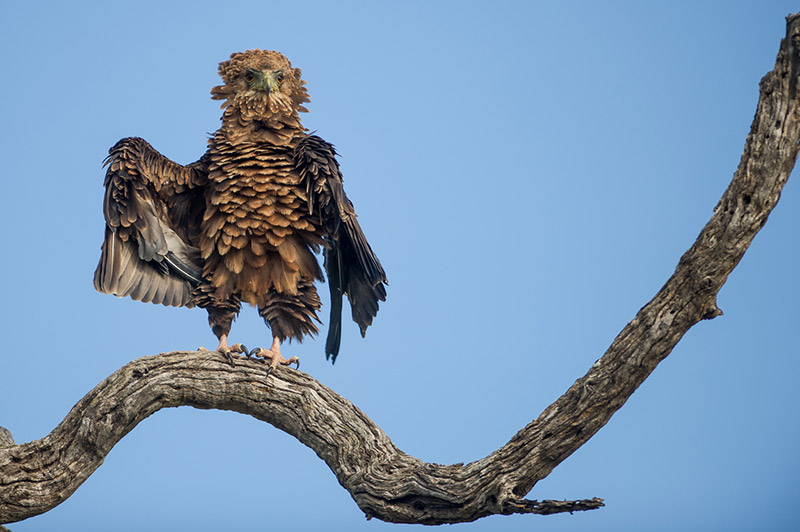 With a contorted body and beads of sweat running all over, and the increasing numbness in both my hands, it moved and ruffled its feathers! I managed to depress the shutter with the smallest movement and hoped that this was it, the shot. I quickly reviewed my photographs on the camera’s LCD screen and was smiling as this was what I wanted, something different. I drove home and only when I returned did it dawn on me that I could have had the bird in flight as well if I had just stayed a little longer. Strangely enough I was disappointed to think that I wanted to capture the norm and was grateful to have captured the unfamiliar view of this bird.

After downloading my pictures onto the computer when I got home, I saw the funny side of my 3 hour ordeal out in the bush, trying to get the perfect photograph. Proven to be one my favourite photographs and putting them together in a satirical manner – truly was a shot of a lifetime. It’s not what you capture, but it often is about how you capture it – the moment that solidifies the passion in the art form.