How I Got the Shot: “Jumping Red Squirrel”, Will Nicholls

Home » Inspiration » Wildlife » How I Got the Shot: “Jumping Red Squirrel”, Will Nicholls

Red squirrels are my favourite animal to photograph. They are full of character and are suckers for hazelnuts. I’ve spent the last 6 years feeding them in a woodland near my home, and this has resulted in me gaining their trust. I’ve taken many different shots of squirrels, but I wanted something a bit different. Squirrels lead an arboreal life (meaning they spend a lot of the time in the tree tops) and consequently they are very acrobatic in their jumping. I wanted to capture this on camera. 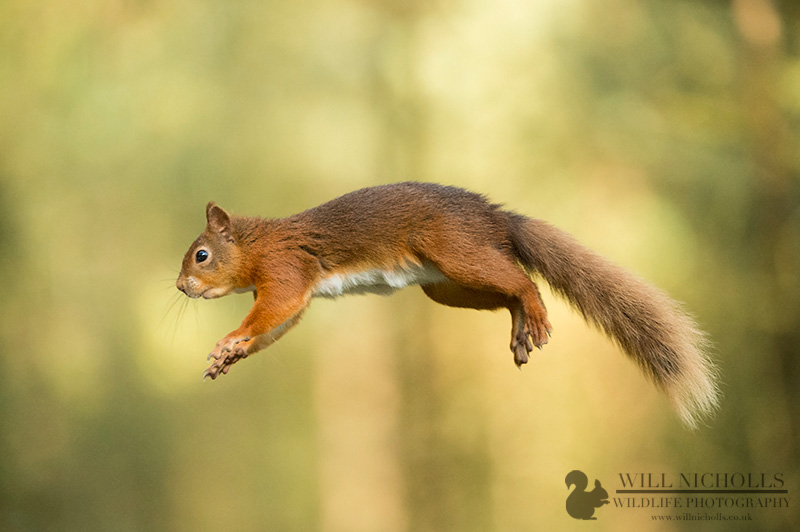 To achieve this, I propped up a log at an angle, almost like a launching ramp, in front of a wooden post. On top of the wooden post I put a platform with some hazelnuts on it. The idea was that the squirrels would jump between the two points and I would take an image as they leapt past. But with such a fast movement in an area of relatively low light, this was going to be a challenge.

The first problem was the fact that the squirrel didn’t jump at exactly the same point each time. The distance from the camera which it jumps at is constantly changing, meaning the focus for each shot needs to change too. The squirrels are too quick to track and focus on, so my best bet was to leave the camera looking at the gap and guessing the required focal plane.

This went wrong… many times. 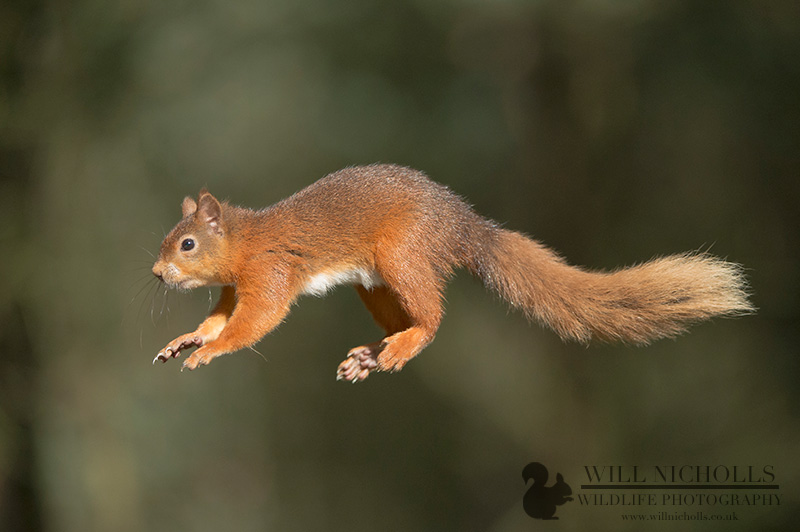 The above shot may seem fine at a low resolution, but it is ever so slightly out of focus. Taking photos that were “almost there” seemed to be a recurring theme. Even so, I persevered and stuck with what was an entertaining photo to try and achieve.

The other problem was getting a sufficient shutter speed in the low light of a woodland. Using a Nikon D4, I pumped the ISO up to 10,000. Much higher than I would have liked, but it allowed me to use a shutter speed of 1/2500th of a second. This was just about enough to freeze the movement and remove any motion blur.

At the time there were two individual red squirrels in the woodland (it is a small patch). One, which went by the name “Scooter”, was my star jumper. She’d leap straight across the gap and grab a hazelnut, and leap back across again. However, the other squirrel was not so compliant. He decided to climb up the wooden pole and stretch as far as he could to reach round the edge of the platform and pull himself up. Unfortunately for me, this worked.

Whenever this happened, the squirrel would get rid of all the nuts without doing a single jump. I soon put an upturned bucket on the pole, and that stopped the mischievous individual from cutting corners. 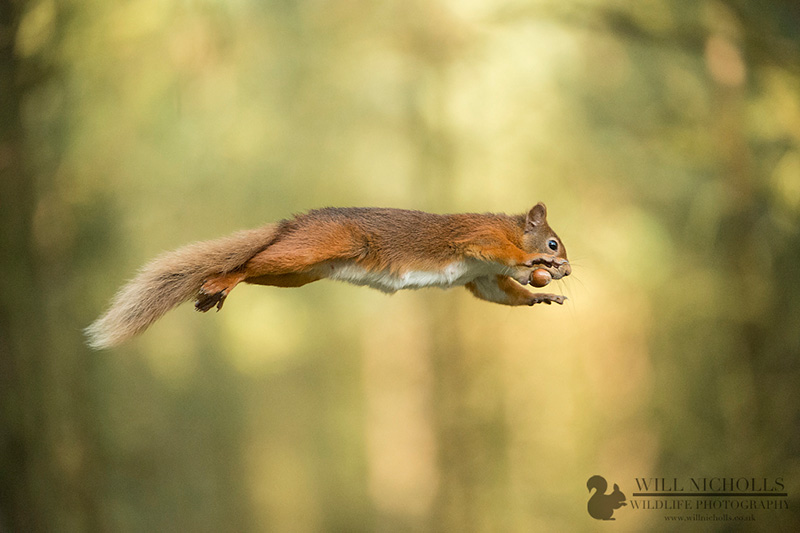 The return leap provided ample opportunity for comical shots. The squirrels jam the hazelnut between their teeth so that they can carry it around, with the aim of either eating it on the top of a tree or running off and caching it.

With a bit of luck and a lot of worthless frames, I caught a handful of good images. This particular photo of a squirrel leaping through the air with a hazelnut is a favourite.