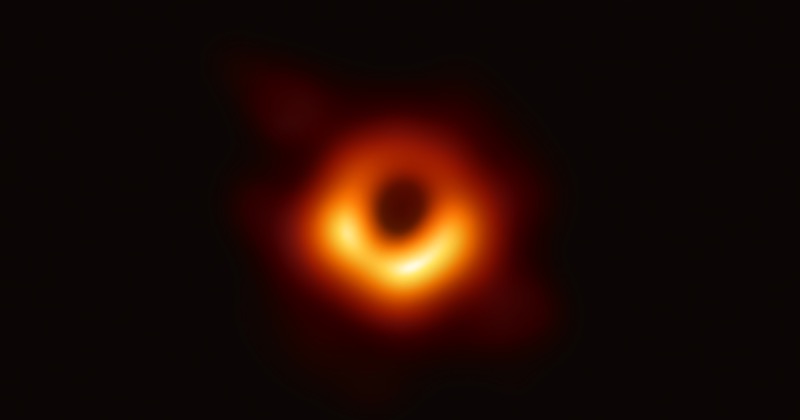 When John W. Draper captured the world’s first photograph of a full moon in 1846, it marked an historic moment in photographic history that would transform the world forever. Now, over 150 years later, we are graced with the world’s first image of a black hole.

As a collaborative effort between 200 international astronomers, the Event Horizon Telescope project photographed the black hole using a network of eight ground-based telescopes. The black hole is located at the heart of the Messier 87 (M87) galaxy, 311 million trillion miles from Earth. At 25 billion miles across, the “monster” black hole is the size of nearly 29,000 of our suns.

The experiment was put forward by Professor Heino Falcke, of Radboud University in the Netherlands.

“What we see is larger than the size of our entire Solar System,” he told BBC. “It has a mass 6.5 billion times that of the Sun. And it is one of the heaviest black holes that we think exists. It is an absolute monster, the heavyweight champion of black holes in the Universe.”

The image itself, which is a blurred doughnut shape of varying warm shades, was described by Falcke as a “ring of fire” with a circle of black at the centre.

“If immersed in a bright region, like a disc of glowing gas, we expect a black hole to create a dark region similar to a shadow — something predicted by Einstein’s general relativity that we’ve never seen before,” Falcke said. “This shadow, caused by the gravitational bending and capture of light by the event horizon, reveals a lot about the nature of these fascinating objects and allowed us to measure the enormous mass of M87’s black hole.”

To create the image, extremely powerful telescopes located in remote sites – such as volcanoes in Hawaii and deep in the Antarctic – were coordinated to scan the black hole over 10 days.

The telescopes gathered so much information that it was impossible to transfer it over the internet. Alternatively, the scientists had to store the data on hard drives that were then flown to central processing centres in Boston, US, and Bonn, Germany, where they could assemble the image using supercomputers.

Professor Sheperd Doeleman of the Harvard-Smithsonian Centre for Astrophysics, who created the Event Horizon Telescope project, described the image as “an extraordinary scientific feat”, which would have been “impossible just a generation ago”.