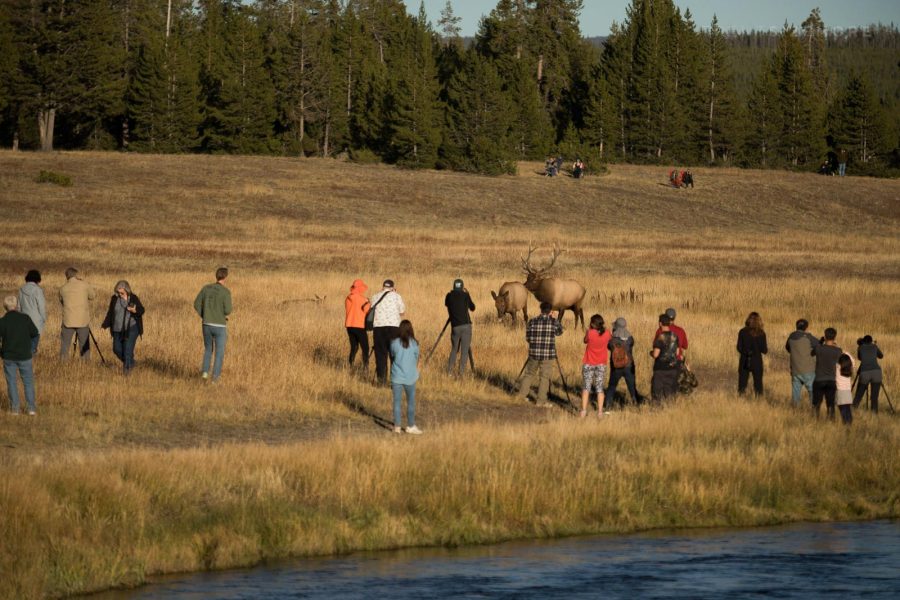 Wildlife photography in Yellowstone National Park is an incredible opportunity, yet some bad photographers are giving all photographers a bad name by not following the rules. I won’t even get into the plain rudeness of too many “professionals” that further that bad name.

The rules for wildlife viewing in Yellowstone are very simple. You’re required to stay 100 yards away from bears and wolves, and 25 yards away from everything else. If an animal approaches within that distance, you’re supposed to back up or leave. If an animal is outside that distance and changes its behavior because of you, you’re still too close. The ONLY exceptions are when a park ranger is on scene and allows the group to approach closer, or you’re driving by animals in your car.

Too many “photographers” visiting Yellowstone just don’t seem to get it, many of those calling themselves professionals. Even worse, more than a few obviously desperate photographers go as far as purposely harassing wildlife for a photo op.

Although I’m sure many disagree, I see nature photography as photographing nature completely undisturbed. Anything that causes an animal to change its natural behavior is pushing the lines of harassment.

Accidentally disturbing an animal is just that – an accident, as long as you remove yourself from the incident. Purposely whistling at, clapping at, chasing or baiting an animal to get your selfish shot is unquestionably unprofessional. You don’t need an animal to look into your camera. You don’t need to be close enough for a full frame head shot with your 300mm lens. 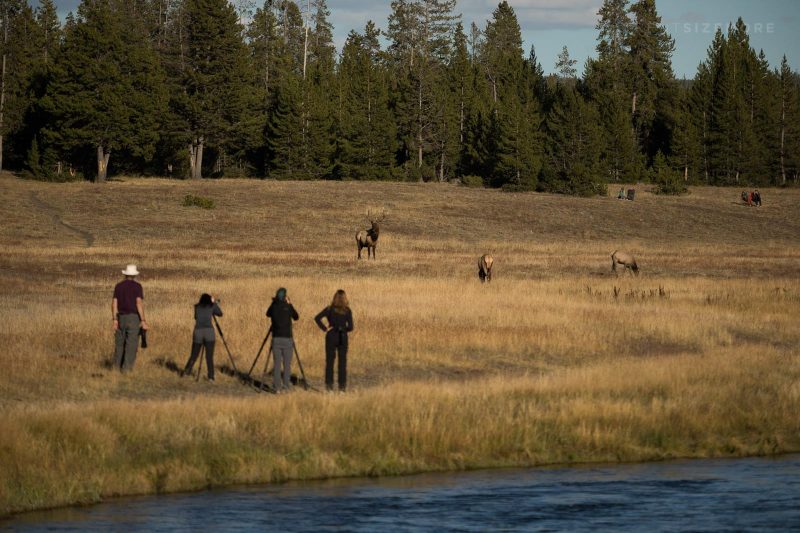 One day this fall, I watched what started as a few people photographing the bull elk on the Madison River quickly escalate into a dangerous scene because of the “monkey-see-monkey-do” syndrome. The four people above appear to be photographing legally, but even the legal 25 yard distance is not safe when a testosterone-filled bull elk is running around. 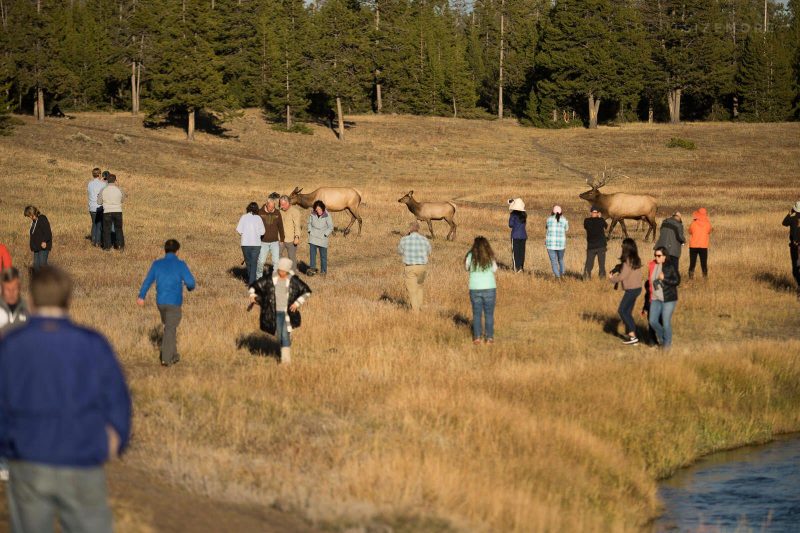 When a bull elk is bugling directly at you, it’s time to move. Take notice of the man carrying a young child to get his cell phone photo below. A few photographers made it seem okay for everyone else to get as close as they wanted to a dangerous animal. 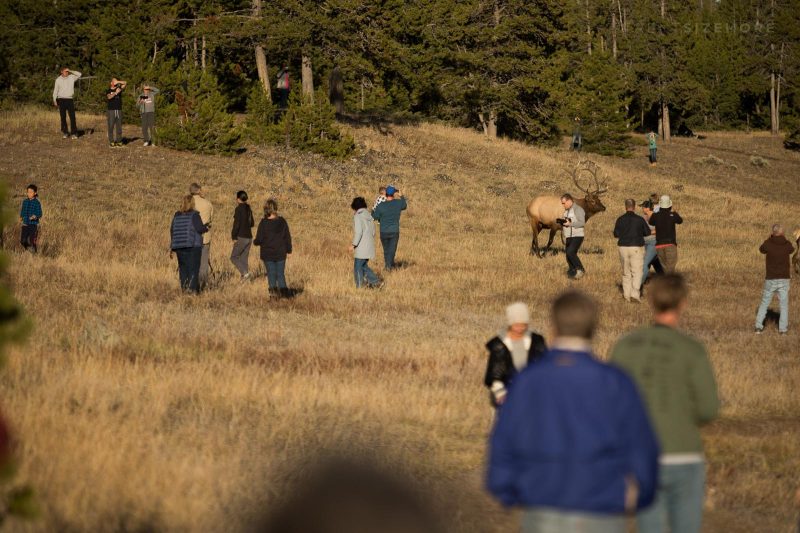 Even when the bull became very aggressive towards the crowd and was hurrying to gather his cows, a couple of mindless photographers still remained. If a park ranger was there (I never saw one), he/she would have had a fit.

I’ve driven over 12,000 miles through Yellowstone this year alone, so I’ve seen just about everything short of an actual animal attack. I’ve watched photographers with large lenses chase elk, coyote, fox, bison, and even bears. I’ve seen people with cell phones attempting to get the same photo as the professionals, requiring them to get even closer. 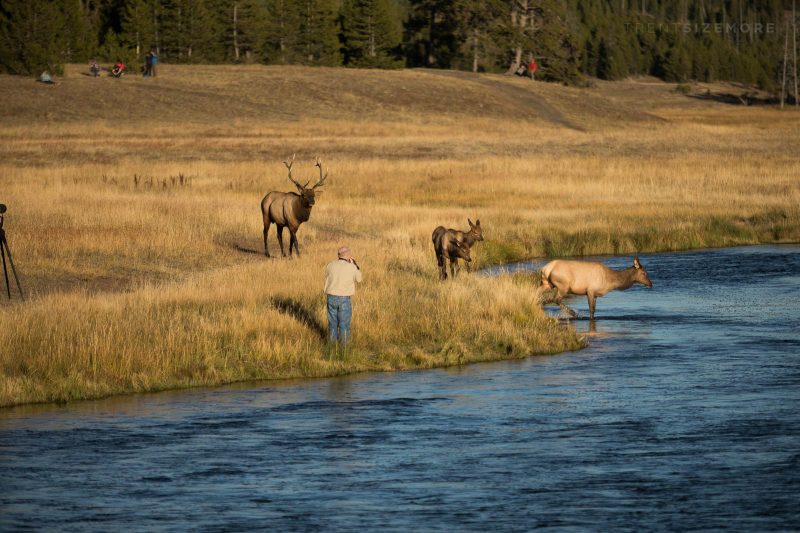 If you see a photographer harassing wildlife, you can try to speak up and get them to leave. If you’re lucky, they’ll know they’ve been caught and move on. If you’re not (usually the case), you’ll get an earful and nothing good will happen. It’s hardly worth trying to intervene, unless they’re disturbing animals you were already photographing.

Very seldom is a park ranger going to be in right place at the right time to be able to see someone violating the wildlife laws. If you feel so inclined, you can film the illegal activity, making sure to get undeniable proof including their license plate. Turn it into a ranger or visitor center, and the NPS will take the appropriate action.

If you’re so desperate to “get the shot” that you have to chase an animal around, please do all photographers a favor and stay home.