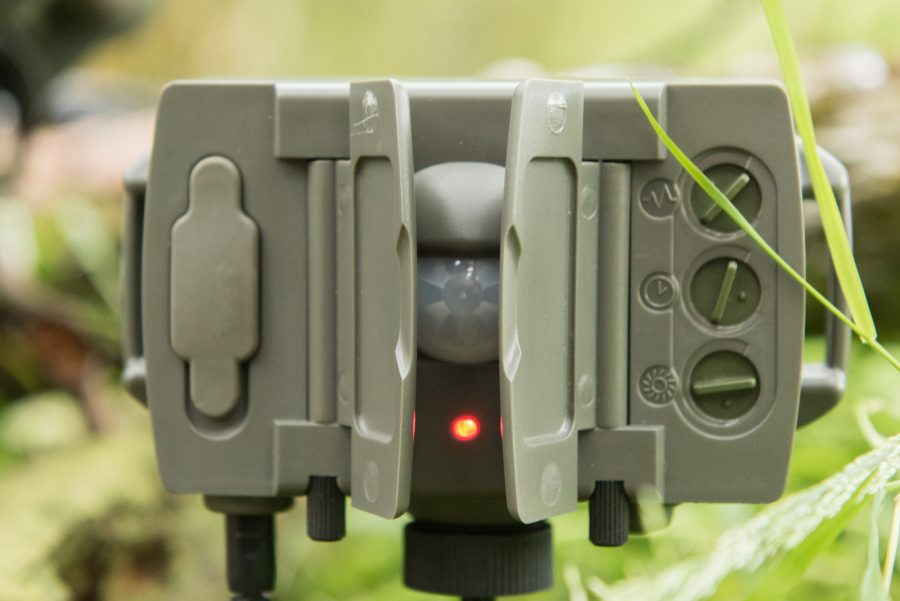 Camtraptions, a company developed by wildlife photographer Will Burrard-Lucas, is dedicated to producing equipment for wildlife camera trapping. It’s a popular technique that requires some sort of infrared trigger to activate the camera when an animal moves past.

The original Camtraptions motion sensor did the job, but there were a number of shortfalls in usability. You had to fiddle with and turn screws on a small switchboard, hidden inside a rather tight outer-casing. Whilst the sensor was a good low-cost alternative, I am sure I will be forgiven for saying it wasn’t the easiest piece of equipment to use.

However, the second generation of the Camtraptions PIR Motion Sensor is now here. Having taken on board all of the feedback and suggestions he received, Will has now redeveloped the sensor and it’s looking better than ever. I got hold of one to try it out, and it’s pretty impressive.

Firstly, the entire design is totally different. This time the motion sensor comes in a much more user-friendly casing, with external knobs for twisting and switches for flicking. 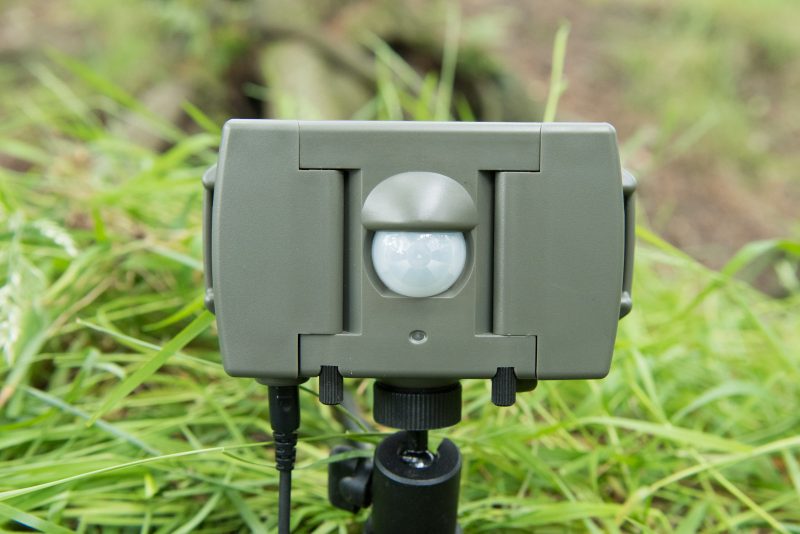 This second generation of the sensor looks the part. It really does, and that is something which is important when it comes to bolstering customer confidence in the product.

My favourite feature of the new casing is the adjustable blinds which narrow the line of sight of the sensor. The previous version would require some DIY modification to stop it triggering when something was far out of shot, thanks to the incredibly wide area that the sensor can work over. However, this time you can pop out two flaps to obscure its view, which in turn reveal those knobs and switches I mentioned.

If you’ve tried the previous generation, you’ll realise how useful these flaps are. It means that you can precisely fine-tune the area where the sensor will trigger so that the camera fires when the target is in the shot, rather than on the approach. The two black screws you can see on the bottom of the case tighten these flaps so that they don’t move out of position.

The knobs that you adjust are a little tight, and it would be good to see larger grips to make the adjustments smoother. However, they are still easily twisted into place. There are indentations on the casing which show where your selection is, and where you are on the “low to high” scale of each mode.

There’s a female screw thread on the bottom, so you can easily attach it to a tripod plate. But if that doesn’t take your fancy, there are two “handles” for straps on either side so that you can mount the sensor onto a tree easily.

The camera uses 6 AA batteries, giving it 2 months of standby time. They are inserted by unscrewing a back plate and slotting them in place. Again, a much-needed improvement over the first generation of the sensor. 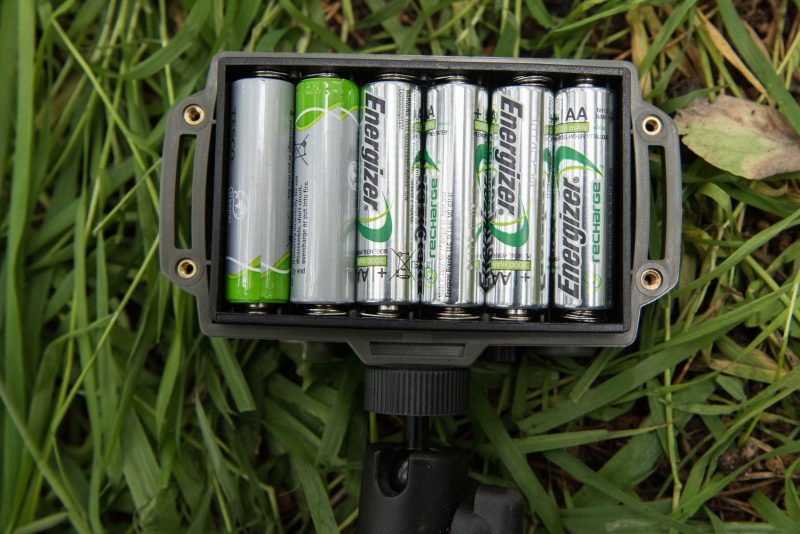 To adjust the settings of the Camtraptions PIR Motion Sensor, you’ll need to turn the 3 knobs. These control three things: sensitivity, interval timing, and luminosity threshold. 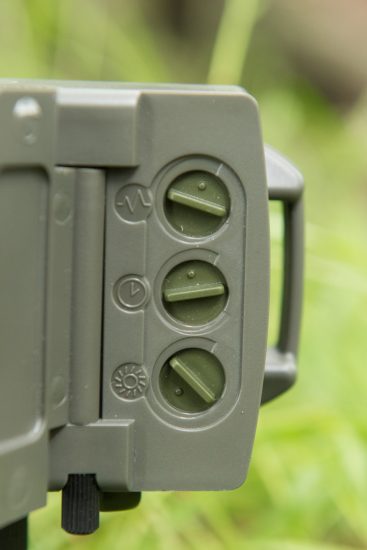 There are all sorts of possibilities opened up to you via these knobs. For example, adjusting the luminosity threshold will allow you to determine whether or not the sensor will trigger only at night, at daytime, or all of the time.

There are a number of different program modes open to you with this generation of the trigger, and that brings to life all sorts of camera trapping creativity. Using the handy flash cards supplied with the trigger, or the even-handier smartphone app, you can see what combination of switches need to be flicked to enable it. 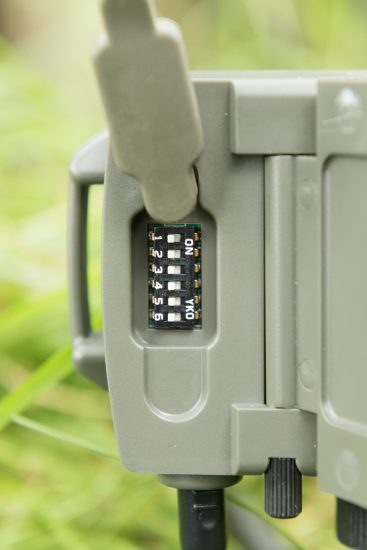 It sounds and looks more complicated than it is, really. The first 5 switches are involved in choosing the program mode, and the 6th enables its wireless mode. This makes it compatible with Camtraptions’ wireless triggers, although it does reduce the response time by 0.1 seconds.

There are 32 different programs that can be enabled for the camera, and this adjusts the functionality of the three knobs slightly to suit; each program will fit into one overall “category of mode.” For example, there are are 12 different programs to adjust a standard stills interval mode – such programs are:

Programs 1 to 6 will work throughout day and night. Program 7 to 9 will work at night, and programs 10 to 12 only in the day.

The other modes will allow you to record video instead of stills, make the sensor work in Bulb mode (so it can control the camera’s shutter speed), and wake the camera and flashes before firing the shutter. There’s a final mode which mimics the original version of the sensor, sending one long shutter press signal to the camera that extends if further motion is detected. This let’s you blitz the scene with burst mode until the action is over.

Initially, the idea of this switchboard put me off a bit. I feared it would be as complicated and tricky as the previous generation of triggers, but actually it’s quite simple. Without some sort of expensive touchscreen LCD display, I can’t see how else you could incorporate such a variety of different modes into the device. It’s this that keeps the cost down, and using the app to see what combination of switches to flick is a small price to pay.

Will has included one other small, but very beneficial, feature on the PIR Motion Sensor. That comes in the shape of a small, red LED light which will flash when the sensor is triggering. Put into its new “testing” mode, you can see where exactly the sensor will trigger without having to fire the flashes to test. 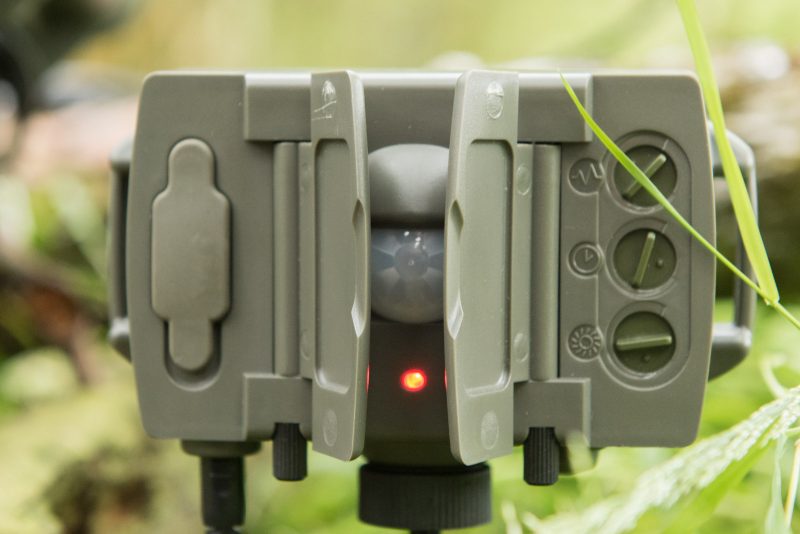 This light will also flash in a combination that will let you know how much battery life is left in the sensor. Pretty neat.

All in all, the new Camtraptions PIR Motion Sensor is a massive improvement on the first generation unit. It’s no surprise that they sold out immediately when Will announced their availability for pre-order.

There were no problems in using the trigger, and it performed exactly as I had hoped. The built quality is brilliant in comparison to the first generation, and the usability of the sensor is much improved. Perhaps the switchboard is a little confusing to use at first, and an LCD screen instead would provide total customisability in a much easier way to control. However, there isn’t anything like that on the market and probably for good reason: it’s expensive to do so.

The only major downside? I’ve yet to have a badger step in front of the sensor in a good pose…

You can buy the PIR Motion Sensor for £170, plus any applicable taxes, from the Nature TTL store directly.