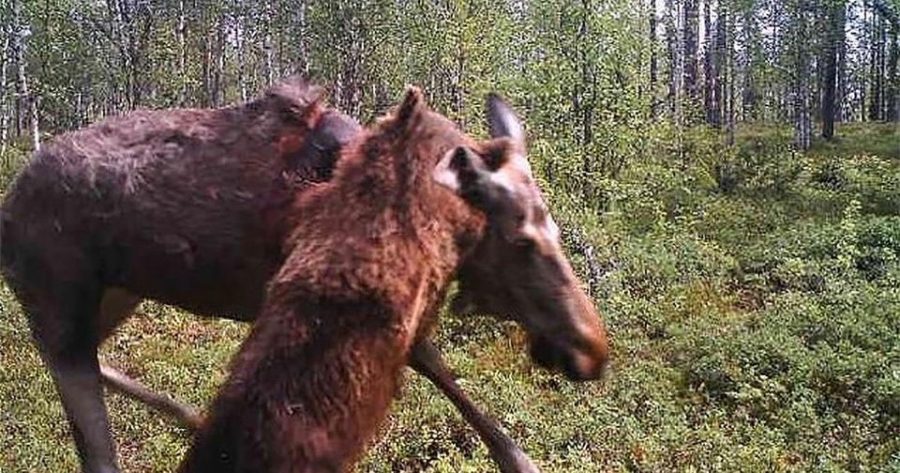 Border surveillance cameras aren’t designed to capture dramatic wildlife moments you’d expect to see on a BBC natural history documentary, but on rare occasions they can record events that a dedicated photographer may go a lifetime without. In this instance, a surveillance camera operated by Finland’s Kainuu Border Guard captured a brown bear attacking and killing an elk.

Nestled in the forests of Kuusamo municipality, the surveillance camera monitors the border between Finland and Russia. Covered with mostly pine trees, the area is a hotspot for bears and bear watching.

However, according to the Director General of the Kajaani Border Guard, Jussi Voutilainen, whilst images of bears are common on the camera, violent scenes such as this are not. Triggered by a motion detector, the surveillance camera began to capture the bear as it attacked the neck of the elk, before then eating it at the same location.

“Our patrols are now trying to avoid the area. The bear certainly wants to defend its prey, so safety precautions need to be taken into consideration,” Voutilainen told YLE.

Fortunately, bear attacks are very rare in Finland, with only one fatality since 2000 – a jogger running in the forest at midnight. Estimates suggest that there are between 1,200 and 1,500 brown bears in Finland, although there could be many more.

The bears become very frequent around this time of year, as they search for food following the end of the mating season. They then go into hibernation at the beginning of November, with many of the bears crossing the border into Russia to dig their winter homes.

This makes Finland a popular place for bear photography, with wolverines and wolves also living in the region. Brown bears are also hunted from 20th August to 31st October, with around 100 bears shot per year.