Giant squid are a rare sight in the wild, so much so that they have achieved a mythical like status and inspired tales such as that of the legendary Kraken. But scientists in the United States have just released this video of the first ever giant squid in North American waters.

The scientists that recorded the footage were positioned off the Gulf of Mexico – roughly 100 miles from the coast of Louisiana and Alabama – as the squid reached from the darkness and revealed its dreamlike form to the camera, according to CNN. Funded by the National Oceanic and Atmospheric Administration’s Office of Ocean Exploration and Research, the crew were on a two-week voyage to uncover the mysteries of the deep sea.

Watching their specialised Medusa camera for any signs of life, the researchers witnessed the “usual” lantern sharks and deep-sea jellyfish. The New York Times reports that after about 20 hours into recording, Dr. Robinson witnessed the tentacles creep into the camera’s view, reaching for the LED bait attached to the rig. 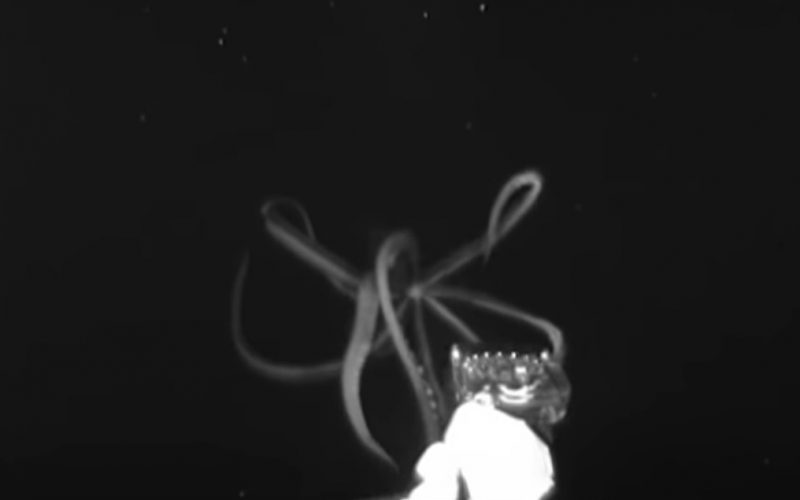 “My heart felt like exploding,” said Dr. Robinson, as the other scientists reacted excitedly to the footage. Watching the footage on a loop, the team were able to identify that the curious cephalopod was indeed a giant squid, due to the unique suction cups on its tentacles. To be sure, they reached out to a cephalopod expert at the Smithsonian National Museum of Natural History, who confirmed the sighting.

This was the second ever expedition to record a giant squid in its natural deep water habitat, and the very first footage from the United States – making it a historic moment in cephalopod history. The team guess that this squid was a juvenile, at roughly ten feet in height (they can grow up to 40 feet in maturity!).

“Even just a hundred miles off the coast, we’re seeing things that they put on the corner of the maps — you know, ‘Here lie monsters,’” said lead researcher Sönke Johnsen. “You could be out here, and beneath you are giant squid, the things of our wildest imagination! They’re part of our land, they’re part of our country.”