PBS Nature series Spy in the Wild has captured some incredible scenes of monarch butterflies swirling and swarming throughout a remote forest grove.

This incredible spectacle of monarch butterflies, filmed deep in the mountains of Mexico, was shot using a “hummingbird” drone. It is here that the butterflies spend the winter after migrating from colder climates such as Canada, where they all huddle together to keep warm.

As the weather turns to spring and the sun warms the butterflies’ wings, movement begins to occur. When the butterflies reach the critical temperature of 50 degrees Fahrenheit, they can spread their wings and fly.

At this moment, the “forest comes to life” explains the narrator of the film. During this process, the drone captured ground-breaking footage of this species as they begin to swirl around the trees and above the canopy.

The drone itself has been constructed with shields covering the moving propellers. This keeps the butterflies safe and proves that there are ethical ways to film stunning natural spectacles like this with a drone, without harming or disturbing the wildlife involved.

Even though the quality of the drone footage may not completely match that of a high end cinematic camera, due to the tiny camera and sensor, the drone’s ability to capture this natural spectacle from an unusual perspective is a powerful tool for both scientific research and visual storytelling.

This innovative and progressive way of capturing and creating wildlife film is exciting, and is providing audiences with a unique insight into the natural world – one that is more up-close and personal than ever before.

The second episode of PBS Nature series Spy in the Wild, which includes this clip, will be aired on 6th May 2020. However, in the meantime click here to watch previous episodes. 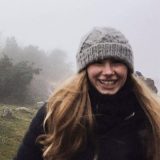 Currently studying BA (Hons) Marine and Natural History Photography, Bethany is a nature photographer, specialising in all things British wildlife. When not writing articles, she can be found out in the South West countryside, photographing local natural spectacles from marine life, urban wildlife, and most recently starling murmurations.