Most of us will remember being told by our mother’s that our rooms don’t magically clean themselves, but for one man, his shed was a mystery of sparkly-clean each morning.

72-year-old Stephen Mckears was mystified when realising that all the tools and hardware he left out overnight on his workspace were neatly tidied away. In an effort to prove that he wasn’t going crazy, Mckears decided to set up a wildlife trail camera and uncover the source of his midnight Cinderella in this short video.

To his (and now the world’s) surprise, a lone mouse was dutifully picking up and putting the items away with peculiar precision. With help from his 70-year-old neighbour Rodney Holbrook, they secretly captured the 2-minute video above of the mouse at work.

As if working to a schedule, the mouse would appear at around 12 to 2:30am and drag the various tools, screws, bolts and so on into an old ice cream tub that Mckears had emptied out the night before. He had first noticed the behaviour earlier in the year, but only recently decided to record what was occurring. 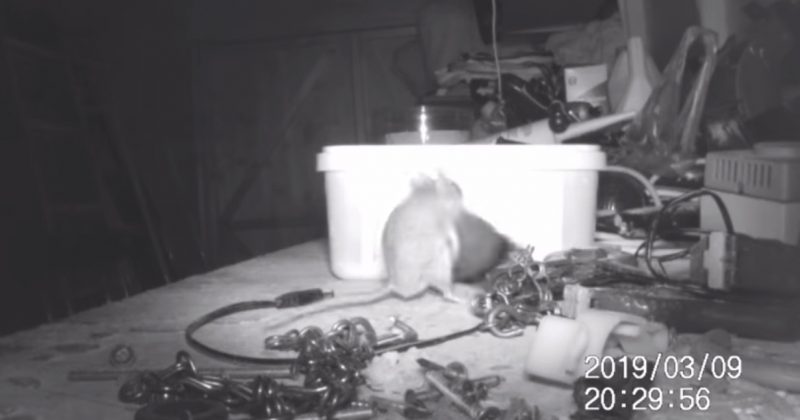 The video shows the mouse even attempting to lift objects well beyond its size, in a determined effort to tidy the shed.

“I didn’t know what it was at first. The kids were saying it was a ghost,” McKears told Sky News. “One day I emptied the tub out and spread the contents on the side – and the next day they were all back in again.”

It is likely that the mouse was nesting nearby, or saw the workspace as a potential nest, and endeavoured to clean it for this purpose.

“I’ve been calling him Brexit Mouse because he’s been stockpiling for Brexit.”