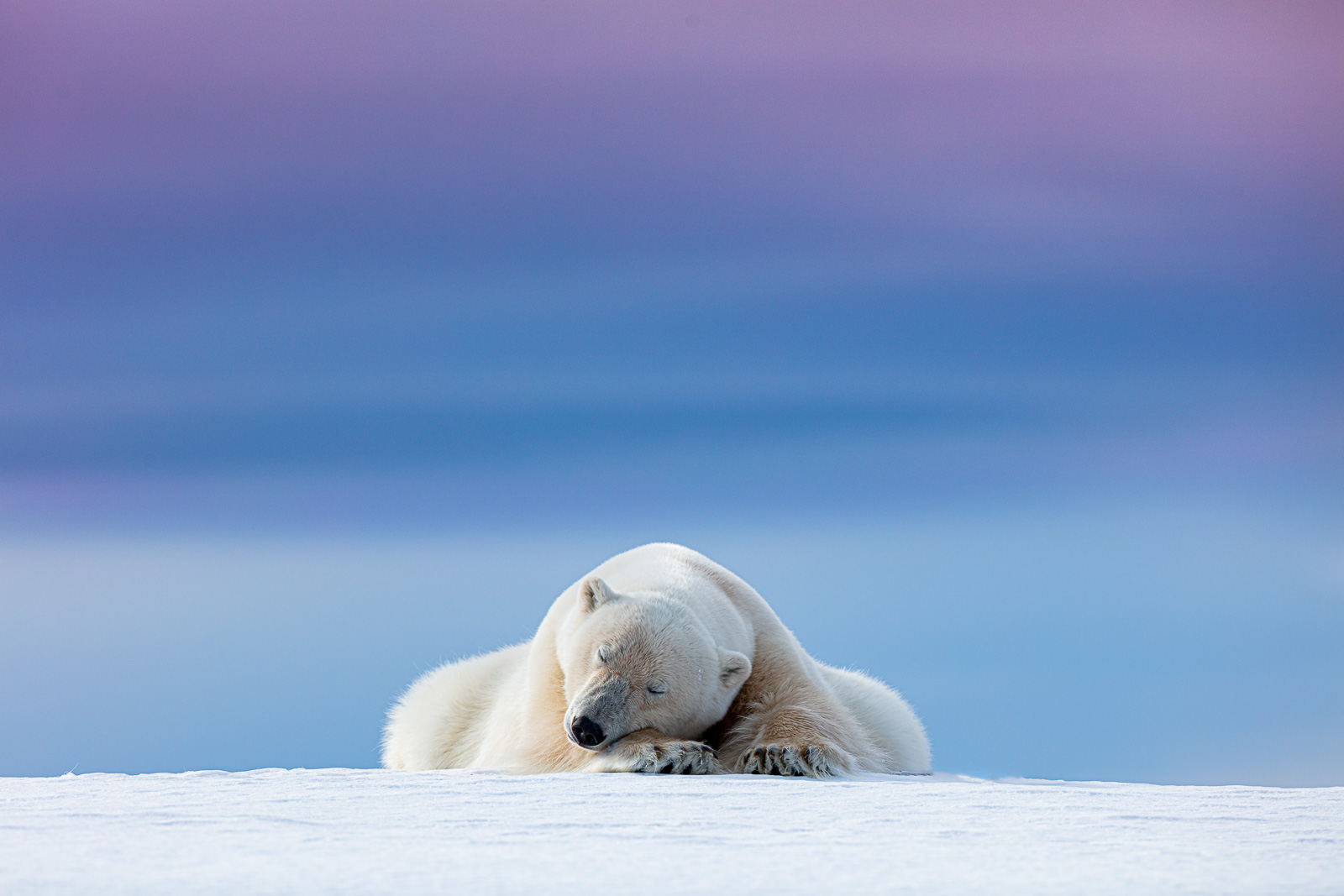 We were watching this rather photogenic polar bear for a while in Svalbard, Norway, when he climbed a ridge and decided to just rest. All the while the soft afternoon skies created the perfect backdrop for a “sleepy bear”.

‘The Cauldron of Creation’ by James Gifford 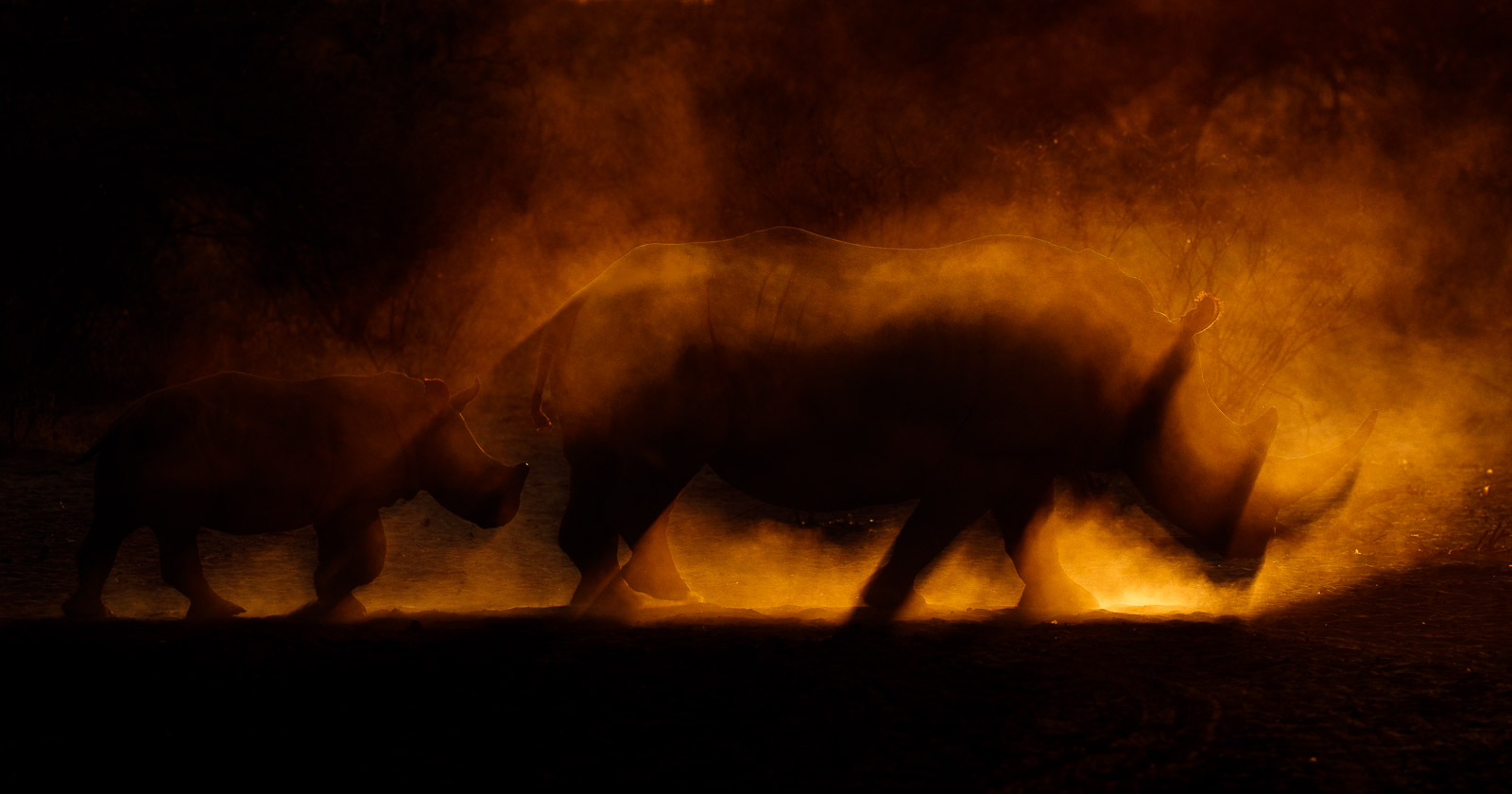 I found this rhino mother and calf resting in the heat of the day and guessed they might go to a nearby waterhole later to drink. To make the most of the dust, I positioned myself to shoot into the sun on the route I expected them to take when they left, deliberately underexposing to capture the clouds of amber dust.

Instead of focusing on the negative aspects of rhino poaching, I wanted my picture to convey a sense of hope – a new beginning almost – as if these were the first rhinos being forged in a fire of creation. The effect of the backlit dust, creating a blurred shadow image, added to the ethereal effect.

Botswana only reintroduced rhinos to the wild relatively recently. So far the program has been doing well, but ironically the safari companies and organisations involved are reluctant to publicise any details about the rhinos in case it attracts the attention of poaching syndicates. Even so, it is a constant battle to deter and combat potential poachers. 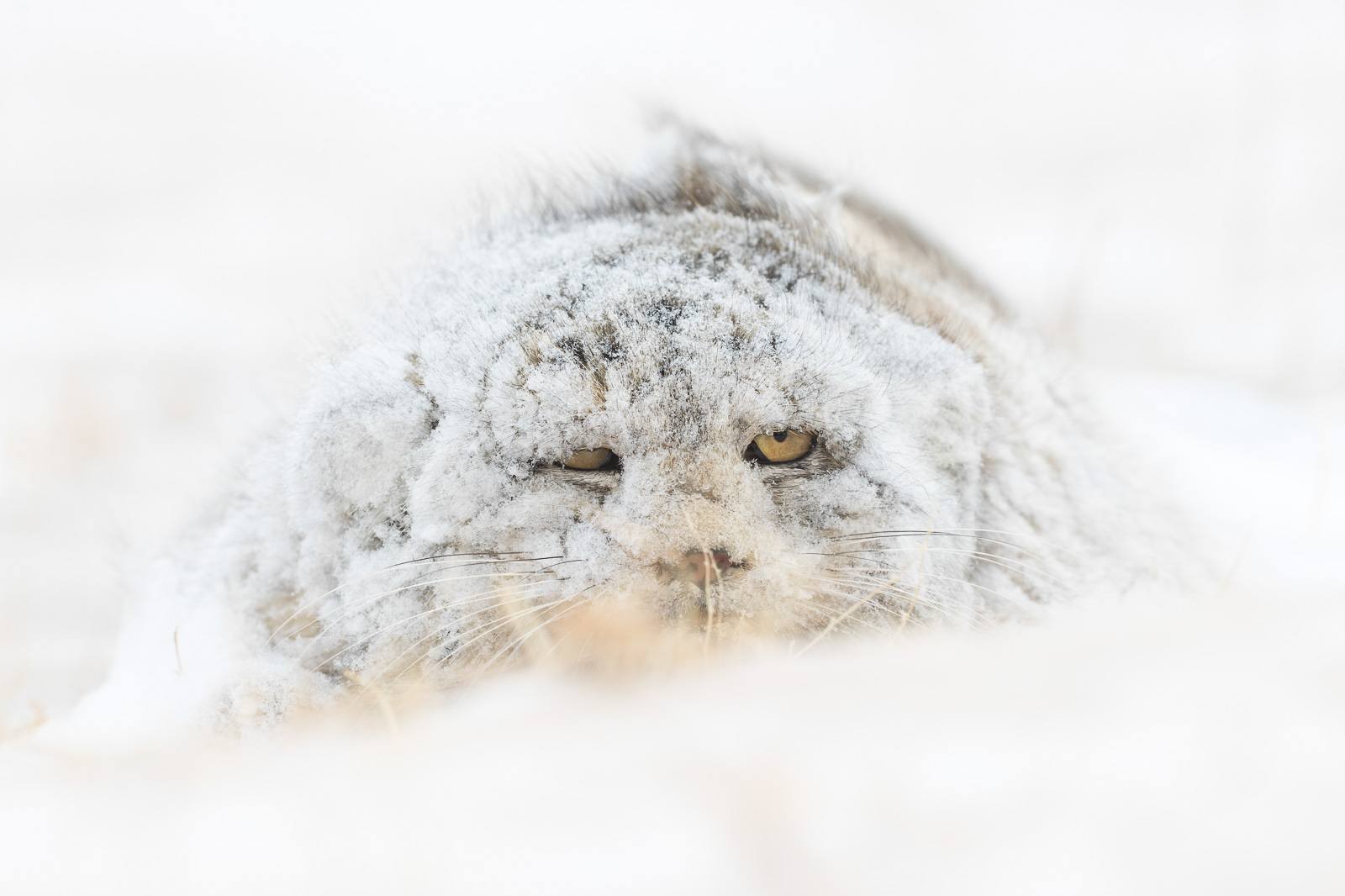 On February 2020 I was in the steppe zone in eastern Mongolia in search of the elusive Pallas’s Cat. After 6 full days of searching we were lucky to find this cat lurking for prey in the snowy steppe. The cat was covered in fresh snow which made him look like an unfamiliar creature – a snow monster!

The Pallas’s cat is listed as ‘Near Threatened’ on The IUCN Red List and is thought to be at risk from habitat fragmentation, a declining prey base, and consumptive hunting. The current status of Pallas’s cat highlights its need for protection.

Its ecology remains poorly understood, impairing the development of conservation strategies. Most records of their occupancy and distribution are in mountainous areas, steppes, and rocky outcrops, suggesting that these are their preferred habitats. Approximately 12% of the species’ range in Mongolia occurs within protected areas. But the steppe zone in which most of their distribution is, is out of the scope of protection.

‘A Predator’s Playground’ by Charl Stols 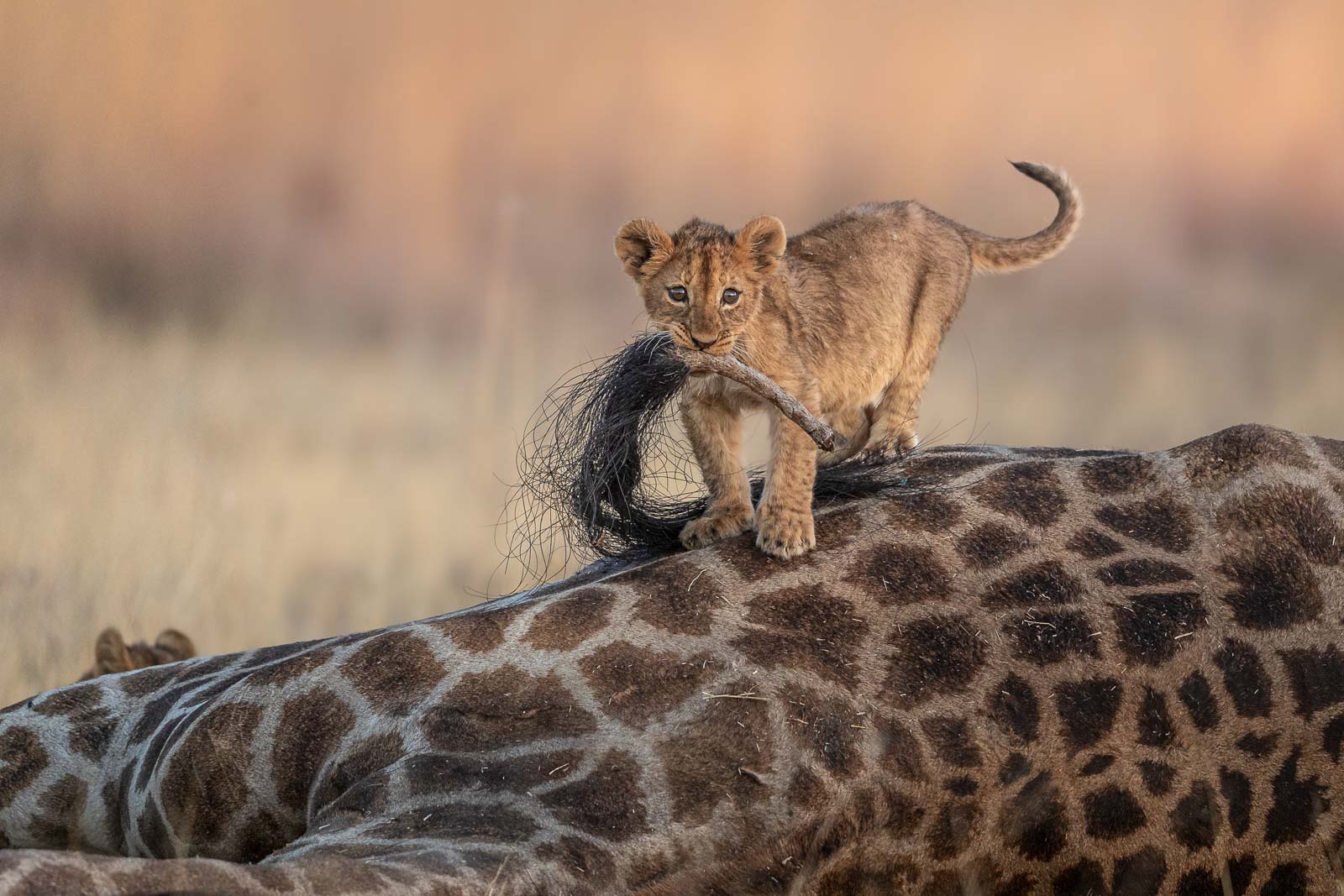 As bizarre as it might seem to us, jumping up and down on a giraffe carcass and playing with the tail of a dead animal is as normal as it can be for a curious lion cub. 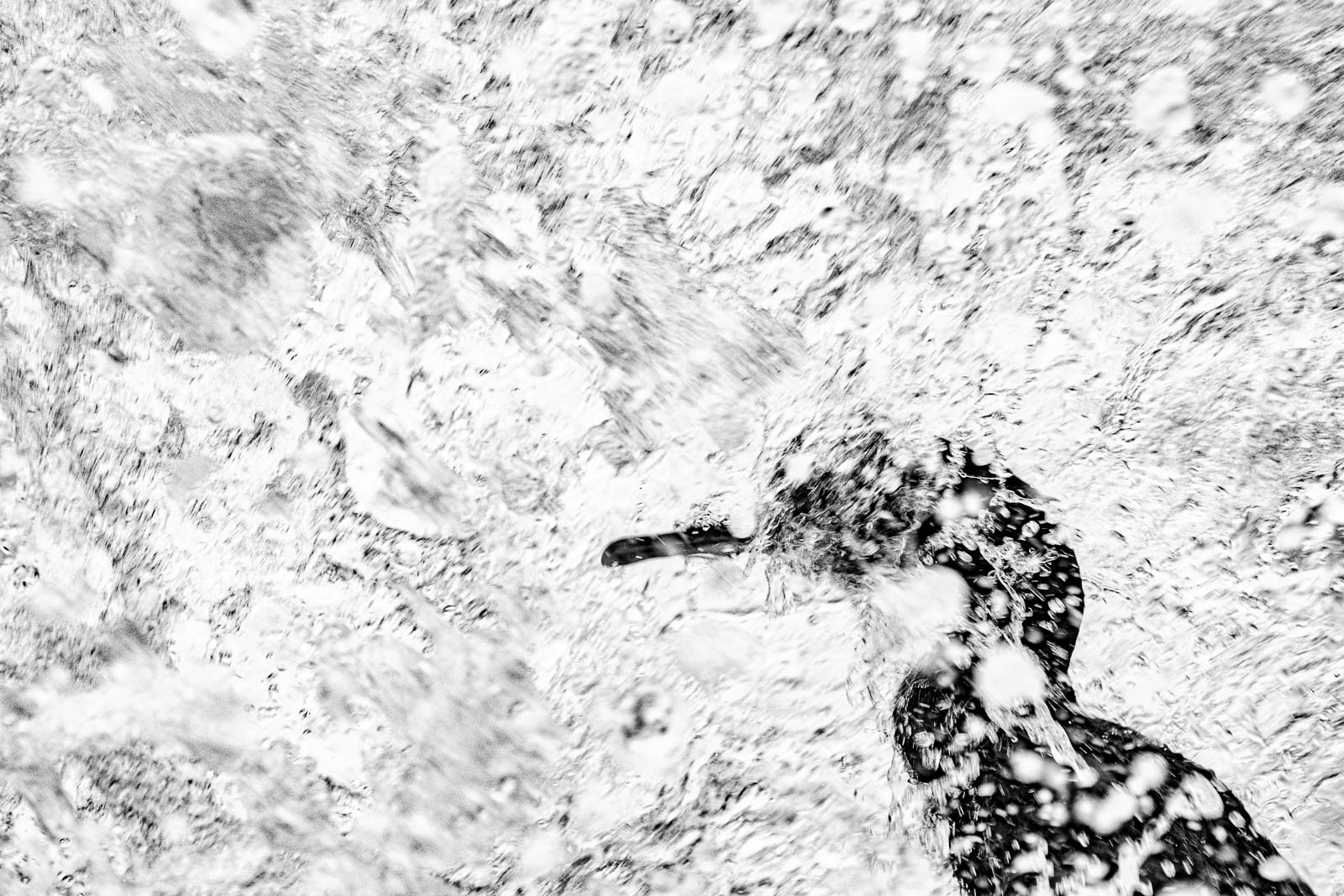 A wave breaks over the head of a common shag on The Black Isle, Scotland. I had spotted this bird sat on the water’s edge from a good distance back, and had made a slow approach. With waves lapping at its feet, I recognised an interesting photographic opportunity.

To my delight, a slightly larger wave approached, covering the bird completely. I managed a few frames, of which this one shows the moment the wave broke over the bird’s head. 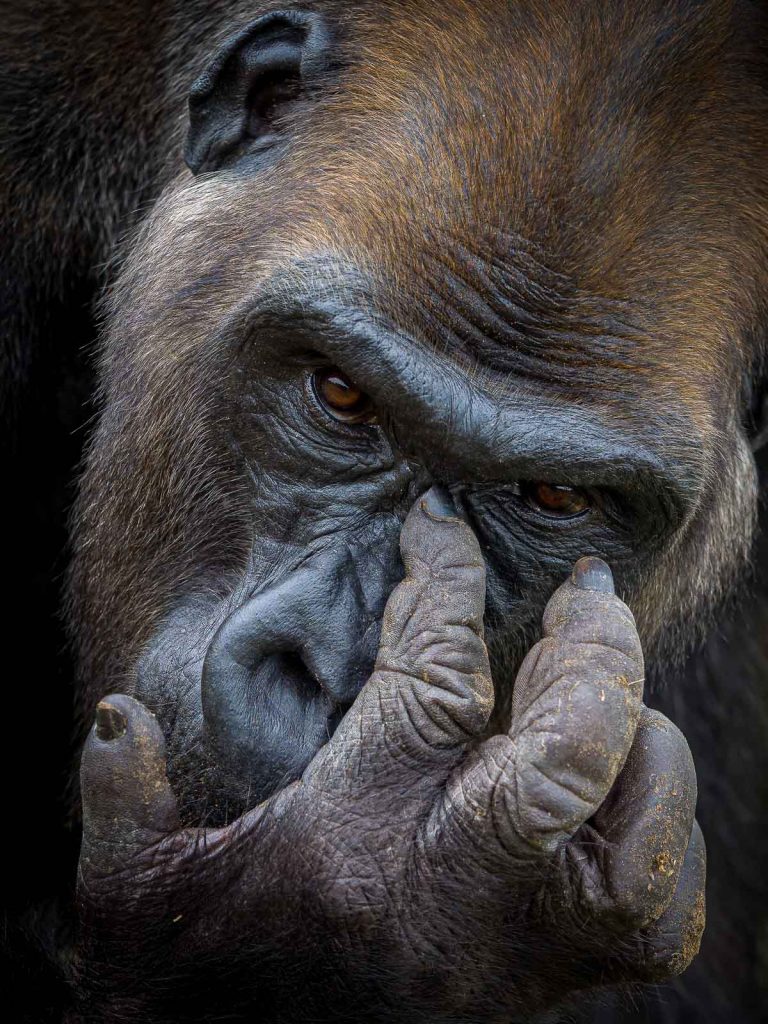 Portrait of the western lowland gorilla called Kangu, who lives in the semi-free conditions in Lesio Louna reserve in The Republic of Congo. Kangu is now twenty years old, most of which had been spent in London zoo.

Thanks to Aspinall Foundation, he is now being adapted to living in the wild. Hopefully he will be able to come back to the forest soon.